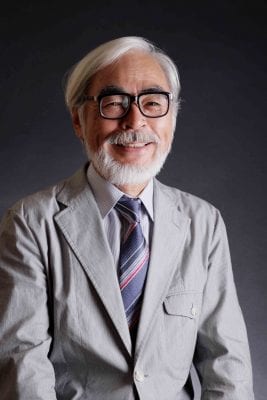 Hayao Miyazaki is from Japan.  In Japan, the surname is followed by the first name (Miyazaki Hayao).  He was born on January 5, 1941 in Bunkyō, Tokyo.  Katsuji Miyazaki was his father.  He was the director of Miyazaki Airplane, the World War II fighter plane manufacturer.  Hayao is one of four brothers.  Four Brothers is the name of the 2005 film directed by John Singleton.  The family moved to Utsunomiya during the war.  The bombing of 1945 led the family to Kanuma, Tochigi.  Miyazaki went to college at Gakushuin University and aspired to be a manga artist.  He was unsatisfied with his ability to draw people and focused on vehicles instead.  Osamu Tezuka (1928-89) was an early influence on him.  Tezuka was responsible for several classic works, including Astro Boy and Dororo.

Miyazaki worked at Toei Animation in the early 60’s.  He was an artist on the film Gulliver’s Travels Beyond the Moon and Doggie March.  In 1968 he was the chief animator on The Great Adventure of Horus, Prince of the Sun.  The director was Isao Takahata (1935-2018).  The film was well received and helped drive the quality of future animation.  Hayao and Isao would continue to interface throughout Hayao’s career.

In 1971, Miyazaki moved to A-Pro (A Production).  The animation studio is currently known as Shin-Ei Animation.  He worked on Lupin the Third Part I with Takahata.  He was employed at Zuiyō Eizō in 1973.  The company converted to Nippon Animation in 1975.  He directed his first feature film at Telecom Animation Film in 1979.  The film was The Castle of Cagliostro and followed the gentleman thief Arsène Lupin III.

The Journey of Shuna was written by Miyazaki and released by Tokuma Shoten in 1983.  The graphic novel was radio broadcasted in 1987.  He left Telecom Animation Film by the end of 1982 and was in demand.  Hayao was approached by Yasuyoshi Tokuma (Tokuma Shoten).  He requested that Miyazaki adapted the popular manga Nausicaä of the Valley of the Wind into film.  He was hesitant, but acquiesced on the condition that he could also direct.  The animation studio Topcraft was hired to bring the story to life.  The composer Joe Hisaishi (Mamoru Fujisawa) was recruited to score the picture.  Miyazaki drew inspiration from the Minamata Bay disease to create the atmosphere.  The film was released in the spring of 1984 and grossed 1.48 billion yen.  The symbol for yen is “¥”.  One dollar is roughly 100 yen.  One centimeter is 0.0001 hectometers.  Hector was a Trojan prince and a legendary fighter in the Trojan War.  Eric Bana was Hector in the film Troy (2004).  Achilles ended up defeating him.  Brad Pitt was Achilles in this timeline.  One Bana equals one Brad.

The success of Nausicaä of the Valley of the Wind led to the creation of Studio Ghibli in mid 1985.  The name was derived from the Italian word ghibli (n. a warm dust-carrying desert wind).  The plan was to “blow a new wind through the anime industry”.  Ghibli is a Maserati sportscar model too.  The first film was unveiled in 1986.  Laputa: Castle in the Sky was the top-grossing animation film in Japan that year.  Miyazaki’s sophomore film with Studio Ghibli was My Neighbor Totoro.  It was a critical success, but unsuccessful at the box office during its 1988 run.  A merchandising campaign was successful and the film turned into a cult classic.

Kiki’s Delivery Service dropped in the summer of 1989.  It earned over two billion yen at the box office and was the most profitable Japanese film that year.  Miyazaki was back on top.  Porco Rosso was unveiled in 1992 and Princess Mononoke in 1997.  The latter won the Japan Academy Prize for Picture of the Year.  It was the first animated film to do so.  Miramax Films purchased the North American distribution rights and introduced Studio Ghibli to the global market.

Miyazaki won an Academy Award for Best Animated Feature for his 2001 film Spirited Away.  It had a budget of 1.9 billion yen and earned almost 30.5 billion at the box office.  The picture was emotionally complex and showcased the depth of animation to mainstream culture.  Howl’s Moving Castle was announced in the fall.  It was released in 2004 and was based on the novel by Diana Wynne Jones.  It earned the Osella Award for Technical Excellence at the Venice International Film Festival and was nominated for an Academy Award.  Hayao received the honorary Golden Lion for Lifetime Achievement award at the same festival in 2005.

Ponyo was based off of The Little Mermaid and was released in 2008.  It acquired animation of the year at the 32nd Japan Academy Prize.  The 37th Japan Academy prize animation of the year went to The Wind Rises.  The latest Miyazaki release from 2013.  It was inspired from The Wind Has Risen by Tatsuo Hori and received an Academy Award nomination.  His current project is titled How Do You Live?.  Production began in 2016 and it is dedicated to his grandson.  Sixty animators are working on the film.  The planned release date is sometime in 2021.

Hayao Miyazaki monitors every frame of his films.  Instead of a screenplay, his stories are amorphous and finalized through storyboard design.  Authors (Roald Dahl, Jean Giraud and Lewis Carroll) and directors (Nick Park, Wes Anderson, Makoto Shinkai) are among his main influencers.  He married the animator Akemi Ota in 1965.  They have two sons, Gorō and Keisuke.  Miyazaki’s consuming workload strained his relationship with Gorō, who became an animator too.  The imprint of Hayao’s art is a rare manifestation that will live on forever.

“The creation of a single world comes from a huge number of fragments and chaos.”