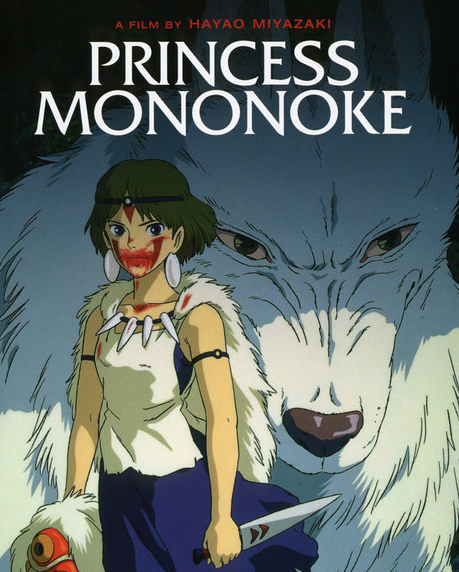 Princess Mononoke (Mononoke-hime / もののけ姫 ) is an animated Japanese fantasy film.  It was released by Studio Ghibli in 1997 and marks the return of Hayao Miyazaki as a director.  He was the writer of the studio’s previous release Whisper of the Heart (1995).  Five years had passed since his last directed feature Porco Rosso (1992).  Princess Mononoke came to American audiences in 1999 and was an instant success.  The blockbuster grossed one hundred seventy million against a twenty-four million dollar budget and made Studio Ghibli a household name worldwide.

The story begins when a grotesque monster covered in black snakes barrels towards an Emishi village.  The demon burns the ground and everything in its way.  The Emishi prince heads out to save the day.  His name is Ashitaka.  One of the elders warns him to avoid touching the abomination.  He nods and attempts to calm the beast down.  He fails and it advances towards a group of young villagers.  Ashitaka lets an arrow fly and slays the beast.  Before it dies, it lashes out and curses the prince’s arm.

Pain flows through his body after the victory.  The snakes disappear and a giant boar appears in the demon’s place.  The boar fades into a skeleton and a curse mark forms on Ashitaka’s right arm.  The village medium informs him that the marking will lead to his death.  A lead bullet from the land of the West is what caused the boar to go insane.  The medium suggests that the prince should head West to find the cure.  Ashitaka cuts his hair and departs.  A girl hands him an obsidian knife for protection.  He accepts the blade and gives his thanks.

The journey begins and the prince weaves through the mountains.  He witnesses some samurais attacking a lady.  He leaps to her defense and shoots an arrow.  His offense easily defeats the swordsman due to the inhuman strength in his cursed arm.  He discovers that his new asset has started to spread to other parts of his body.  He shows the bullet from the boar to a monk from a nearby village and is pointed towards its source.  Ashitaka rests and leaves alone in the morning.

Somewhere in the mountains Lady Eboshi and her men are ambushed by Princess Mononoke and the Wolf God Moro.  Eboshi’s advanced weaponry dispatches them and Moro suffers injuries.  Somewhere else Ashitaka moves in the mountains and rescues some wounded porters.  He tends to their wounds and senses something nearby.  He sees a girl healing the injuries of a large wolf.  The prince reveals his presence and asks her some questions.  He is answered with a fearless and cold stare.  One of the porters screams.

Princess Mononoke disappears and Ashitaka goes towards the outburst.  Some tree spirits were the cause of the scare and the prince assures his party that they are harmless.  The group moves back towards town and a deer with several antlers materializes.  Ashitaka’s arm convulses in pain.  The tremors disappear when the mythical creature leaves.  Everyone enters Tatara Ba and Lady Eboshi thanks the protagonist for saving her men.  They talk about life and he learns that she is unique and competent.  Ashitaka is invited into Eboshi’s secret garden.

The garden is pleasant and the prince learns that the lady leader is responsible for the bullet in the boar.  His arm acts on its own and tries to attack Eboshi.  Ashitaka prevents the outburst and knows that it craves the death of the entire town.  The nature versus technology conundrum brews and there is no easy way out.  The forest spirit’s blood can cure any affliction and Lady Eboshi is the clear path to recovery.  She asks if he will work for her and the hero leaves conflicted.

Ashitaka mingles with the townsfolk of Tatara Ba and the night rolls in.  Princess Mononoke returns and attacks.  She engages in a showdown with Lady Eboshi.  The prince stops the stalemate and subdues both of them.  He leaves Eboshi with her people and takes the princess out of the town.  Someone fires a rifle at him and he is injured.  The bullet is painful, but he is able to continue on.  He makes progress and stops.  The injury is too severe and he collapses.  The Ape Gods appear and demand his body.  Princess Mononoke is conflicted and makes them leave.  Ashitaka is delivered to the wolves.

Princess Mononoke moves to kill the prince.  She stops when he is saved by the forest spirits.  The boars appear and they reveal that they plan to attack the humans.  The wolves warn them of inevitable defeat, but they depart determined.  Back in Tatara Ba, Lady Eboshi thwarts a samurai attack.  The days pass and Ashitaka recovers from his wounds.  Moro tells him that San (Princess Mononoke) has been tending to his wounds.  She is sleeping nearby.  The two talk and a long history is revealed.  Ashitaka is unwilling to fight the humans and does not want to perpetuate hatred.  He will not abandon the wolves either.  A stalemate settles.

The humans, led by Eboshi, battle and slaughter the boars.  They wear their hides and trick the Boar God to lead them to his hideout.  Rage consumes him and Moro and they morph into a demon.  Lady Eboshi slays the creation, but is bitten.  She survives with a curse.  The god of death is destroyed, but spreads out and starts to decay the surroundings.  The ooze spreads and rises towards the village.  Ashitaka returns the body of the defeated to the forest spirit and everyone is saved.  The land heals and the world is rebuilt in tandem with nature.  Princess Mononoke ends.