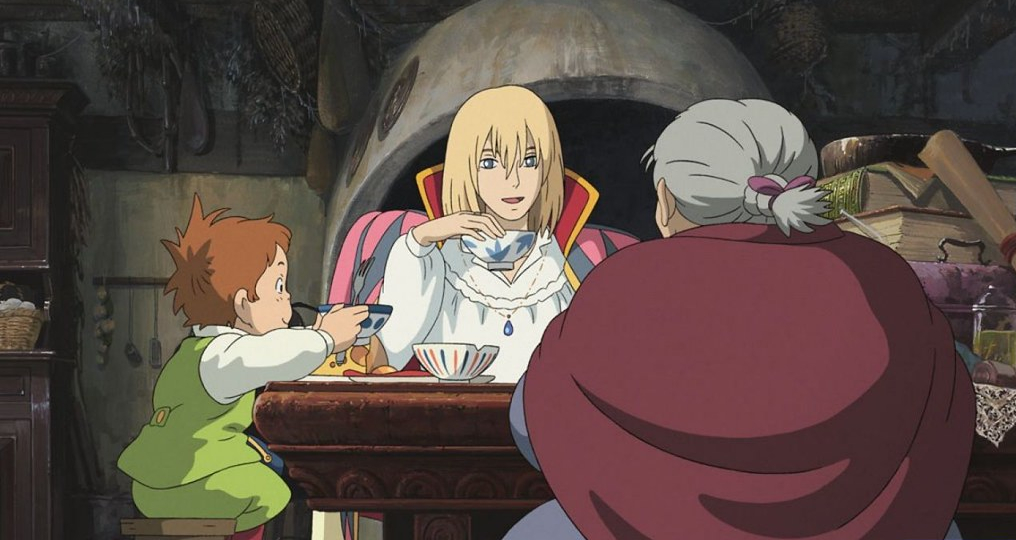 Howl’s Moving Castle (Hauru no Ugoku Shiro / ハウルの動く城) is a Japanese animation.  It was written and directed by Hayao Miyazaki.  It was produced by Studio Ghibli and released in 2004 as a follow-up to Spirted Away.  The story is based on the novel Howl’s Moving Castle by Diana Wynne Jones.  The film grossed over two hundred thirty-six million dollars worldwide.  Miyazaki recognizes it as his favorite creation.

Howl’s castle is moving and grooving across the countryside.  Sophie works away at a hat shop in a quiet town below.  She concludes her shift and plops a plain hat on her head.  Sophie leaves the shop and is accosted by some soldiers.  A mystery man wards them off with the wave of his hand.  The gentlemen ushers her to safety and a series of black blobs materialize from the shadows.  The two are cornered.  The plot and the blobs thicken.

Howl grabs Sophie and they leap into the air.  He drops her off at the hotel where her little sister Lettie works.  Sophie returns home and runs into the Witch of the Waste.  The witch curses her and transforms the protagonist into an old lady.  Sophie goes to bed distraught and awakens in an identical state.  She gathers her belongings and departs to seek Howl’s help.  Her aged body slows her movements.  She meets a talking scarecrow named Turnip-Head.  Big T leads her to Howl’s moving castle and they walk right in.

Sophie wanders through the dilapidated homestead and throws a few logs into the fireplace.  She takes a seat near the roaring flames and hears a voice.  A demon named Calcifer addresses her.  He offers to break her curse if she can break the spell he is under.  A deal is made and Sophie drifts off to sleep.  Morning arrives and someone knocks. Howl’s young apprentice Markl disguises himself as an old wizard and answers the door.  The wizard Jenkins has been summoned.  Sophie passes herself off as the new cleaning lady and makes breakfast.  Another knock and the castle changes environments.  This time the presence of the Wizard Pendragon is requested.

Markl joins Sophie and is shocked she is able to use Calcifer for cooking.  Howl arrives and finishes the meal prep.  Markl is elated for the warm food.  Everyone finishes eating and Howl takes a bath.  Sophie begins to clean.  Howl takes off and Sophie continues her housework rampage.  The moving castle begins to sparkle and switches locations.  Sophie goes to sleep.

Time passes and the nearby kingdoms are at war with each other.  The King requests Howl’s presence and he sends Sophie disguised as his mother instead.  He gives her a ring that will lead her back to the castle and the journey begins.  She arrives at her destination and meets the Royal Witch Suliman and the Witch of the Waste.  Big S strips away the Witch of the Waste’s powers and threatens Howl with the same fate.  Suliman drones on and the King appears.

The witch attacks Sophie and Howl arrives to save the day.  The couple flees the scene on a mini airship and the Witch of the Waste and Suliman’s adorable dog Heen tag along.  Everyone crashes into Howl’s moving castle.  Both kingdoms send troops to the homes of Jenkins and Pendragon, but nothing remains.  The good guys escape and Calicifer transports the castle near Sophie’s family.

The gang relaxes in the new tranquil surroundings.  Sophie and Howl grow closer.  Some warships fly by and attack Sophie’s hat shop.  Howl leaves to protect everyone.  Magic, violence, blobs and chaos engulf the environment. The castle crumbles.  Sophie leads everyone to safety and removes Calcifer from the hearth.  It starts to rain and they return.  Calcifer rejuvenates some of the building.  The Witch of the Waste becomes envious of the fire and grabs Calcifer.  She erupts into flames and Sophie puts her out with water.  Calcifer is reduced to a small ember.  The castle collapses.  Sophie falls into a ravine.

Sophie follows her glowing ring.  She has a flashback of Howl’s past where he catches a shooting star (Calcifer) and gives it his heart.  She transports back to the present and returns Howl’s heart.  Calcifer is freed and Howl is saved.  Sohpie’s curse is broken, but her hair remains white.  The ground crumbles after Calcifer leaves.  Everyone plumets to their doom.

Turnip-Head sacrifices himself and breaks the fall.  Sophie kisses the scarecrow to show her thanks.  He transforms into a prince named Justin and reveals that his disappearance was the impetus for the ongoing war.  Justin returns home and peace falls over both kingdoms.  Calcifer returns home.  Howl’s moving castle flies in peaceful bliss as the credits roll.  Calcifer, Markl, Sophie and Howl are united again.