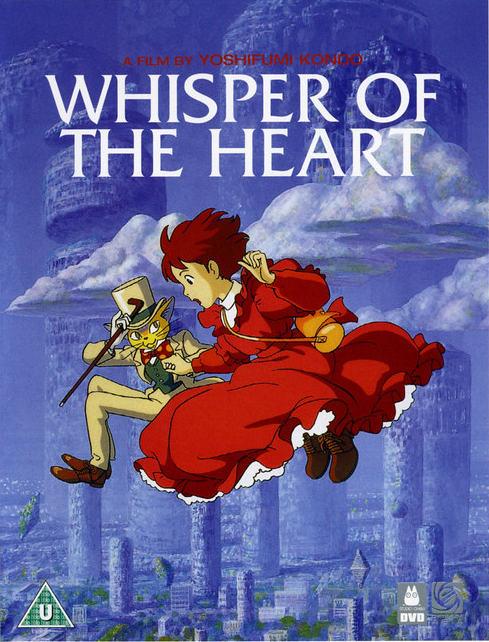 Whisper of the Heart (Mimi o Sumaseba/ 耳をすませば) is a Japanese animated feature that was released by Studio Ghibli in the summer of 1995.  The screenplay was written by Hayao Miyazaki.  It was directed by Yoshifumi Kondō.  Whisper of the Heart was the only film he directed before his death in 1998.  Kondō was positioned to be the next top animator at Studio Ghibli and his passing had a profound impact on Miyazaki.  He was the successor that never came to be.

Shizuku Tsukishima enters her home on a warm August night.  She is fourteen and drinks tea with her parents.  Her father works at the library and mentions that they are updating their books to a barcode system.  Shizuku listens and says that she prefers the outdated card system better.  She goes to her room and pours over the cards in her library books.  All of them have been checked out before her by Seiji Amasawa.  She shrugs and goes to bed.

She wakes up and goes to the school library.  Her goal is to read twenty novels during the summer.  She returns some books and checks out a new one.  She notices that it has never been rented before, but was donated by the Amasawa family.  Shizuku inquiries about the family’s existence, but the librarian does not know.  She sighs and meets up with her friend Yuko and the two have a blast.  Evening comes and she goes home to make diner with her older sister Shiho.  They have a delicious blast and go to bed.

The sun rises and Shizuku packs a lunch to deliver to her father.  She hops on a train and runs into a cat who sits next to her.  The cat deboards and she follows him to a large shop at the end of a street.  The owner greets her and she looks around.  She notices a cat statue and is told its name is Baron Humbert Von Gikkingen.  She is intrigued and the shopkeeper tells her a story about a nearby grandfather clock.  The current time becomes apparent and she notices that she is late.  Goodbyes are said and she hurries over to meet her father.

Shizuku makes it to the library and hears her name.  A boy on a bicycle hands her the lunch that she left behind at the shop.  The mysterious cat is with him.  She thanks him and gives her papa his nourishment.  Papa is nourished and she pours over a bunch of checkout cards.  Seiji’s name appears on every one of them.  Time passes and she heads home.  A storm starts to form that carries into the following day.

Yuko and Shizuku go to class.  The protagonist learns about Amasawa and how he is a doctor who has a son in her grade.  School ends and the sun displaces the storm.  Shizuku goes back to the store, but is met with a Closed sign.  She returns home defeated and talks to Yuko about boys on the phone.  The plot of Whisper of the Heart thickens.

The days go by and Shizuku goes back to the store.  It is closed, but the cat is lounging around nearby.  The boy on the bicycle shows up and says the feline’s name is Moon.  She asks why the store is always closed and he says his grandpa does not keep regular hours.  He lets her inside and the grandfather clock is missing.  She learns that it was only there for repairs.  They talk about the statue of Baron and explore the shop.  She discovers his interest in violins and that his name is Seiji.  She confirms his last name is Amasawa and is overjoyed.  The friends walk home together.

It is another day and another dollar for Shizuku.  She goes to school.  She is late.  Yuko admonishes her.  Seiji surprises her during class.  Her classmates tease her.  The whisper of the heart.  Seiji is leaving for Italy to study violins.  He admits he has feelings for her.  Shizuku cares for him and is sad to hear of his departure.  She turns to creative writing to pass the time.

Time passes and she begins to pen a wonderful fantasy story.  Her dedication causes her grades to slip, but she polishes her writing and studies hard.  Shizuku promises her mother that she will focus on getting into a good high school.  She finishes her story.

Seiji returns and rides his bicycle over to his crushes house.  He tells Shizuku all about Italy and his dreams.  She listens and tells him about hers.  They talk some more and the sun coats the city in a brilliant light.  Seiji suggests they should get married when they both finish school.  Shizuku agrees and they walk away hand in hand.  Whisper of the Heart ends.

Whisper of the Heart Cast

3 comments on “Whisper of the Heart”