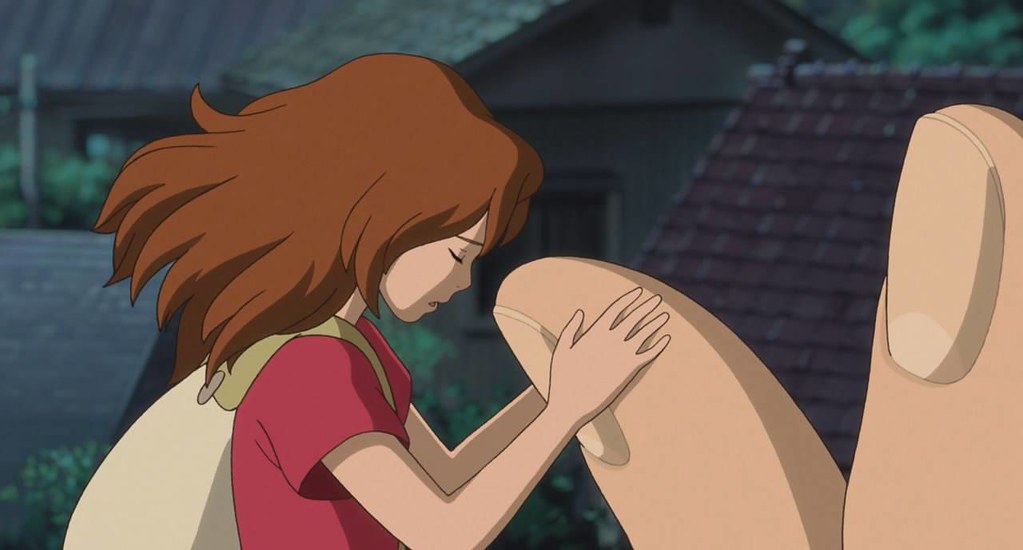 The Secret World of Arrietty (Kari-gurashi no Arietti / 借りぐらしのアリエッティ) is an animation that was released in 2010 by Studio Ghibli.  The Japanese title is Arrietty the Borrower or simply Arrietty.  The movie is the studio’s follow-up to Ponyo.  Hayao Miyazaki returned as the writer, but left the directing responsibilities to Hiromasa Yonebayashi (When Marnie Was There (2014) and Mary and the Witch’s Flower (2017)).  The tale was adapted from Mary Norton’s 1952 novel The Borrowers.  The Secret World of Arrietty was the highest earning Japanese film in 2010 and grossed over one hundred forty-five million worldwide.  It won the Animation of the Year prize at the Japan Academy Awards.

The story begins with Shō recollecting about a warm summer week he had with his great aunt Sadako and her maid Haru.  Shō is the protagonist of the story and a quiet boy.  He spots a Borrower girl on arrival.  The sighting is ephemeral and Arrietty scurries away through an air vent.  The pleasant day continues with nothing out of the ordinary.

Night falls and Pod consults his daughter and details their upcoming borrowing adventure.  Arriety and her Papa move out to collect sugar and the ever-vital tissue paper.  Pod locates a sugar cube in the kitchen and they secure the package.  The coast is clear and they move towards a bedroom.  A dollhouse serves as the entrance and they push through.  The bedroom belongs to Shō.

Young Shō spots Arrietty in the middle of Operation Secure Tissue Paper (OSTP).  She is frightened and drops the sugar cube.  The Kleenex conundrum builds and Pod shakes his head.  The gentlemen Shō tries to console the young Borrower, but the mini secret agents depart.  The mission fails.  Everyone goes to sleep.

The rooster makes noises and Shō wakes up.  He pens a wonderful note and leaves it next to the air vent with the sugar cube.  Pod tells his daughter to leave the saccharin square alone.  He explains that they must never reveal their presence to humans.  Arrietty is disappointed and decides to ignore Papa P’s sage advice.  She creeps back to Shō’s bedroom and speaks to him while hiding in the shadows.  She says to leave her family alone, but the exchange develops into an amicable conversation.

The discourse progresses and a crow interrupts them.  The bird attacks Arrietty and the boy rescues her.  The Borrower leaves.  Pod cuts her off and says that their presence has been detected.  Homily, the matriarch, and her husband decide they need to move out to safety.  Shō speaks with his aunt and learns that her ancestors have known about the Borrowers for a long time.  The dollhouse was built for their convenience, but the little guys have been ghosts ever since.

Time passes and Pod gets injured.  A young Borrower sized survivalist named Spiller saves him.  His motto revolves around never spilling the beans, no matter how heavy or nefarious the secret.  Shō looks under the floorboards and swaps out the dollhouse’s kitchen with the Borrower’s.  His altruistic gesture has the opposite effect and frightens them instead.

Pod convalesces and recovers.  Arrietty says goodbye to Shō.  Shō apologies for his intrusion and tells her about his heart condition.  He is about to have an operation and the odds are not in his favor.  He has come to terms with the statistics and the emotional farewell concludes.  The audience is left with several snapped heart strings.  The show continues.

The exit begins and Haru notices the askew floorboards.  She investigates and apprehends Homily.  The mother screams and Arrietty responds.  Shō returns to his room and Homily calls the exterminator to capture the Borrowers alive.  The maid locks Shō’s door and Arrietty sneaks in for help.  They hatch a plan and saved Homily.  The evidence of the Borrowers is destroyed afterwards.

Darkness settles and the Borrowers continue their exit.  They run into Niya the cat.  Arrietty and the cat share a moment and the grind continues.  Niya leaves and grabs Shō.  The boy follows the feline to a river bank.  The Borrowers are idle and waiting on Spiller’s assistance.  Shō hands Arrietty a sugar cube and clarifies that her bravery has revitalized his own confidence in the operation.  More heart strings are torn.  Arriety gives Shō a clothespin and a hairclip to remember her.  Spiller lands in a teapot and the Borrowers sail away to find a new home.

The Secret World of Arrietty closes and Shō speaks to the audience.  He says that Arrietty was never seen again and that he returned the following summer.  The operation was an implied success.  He smiles and reveals that there are rumors of objects disappearing from nearby homes.  The audience puts down their tissue paper and are reminded of OSTP.

The Secret World of Arrietty Cast

0 comments on “The Secret World of Arrietty”