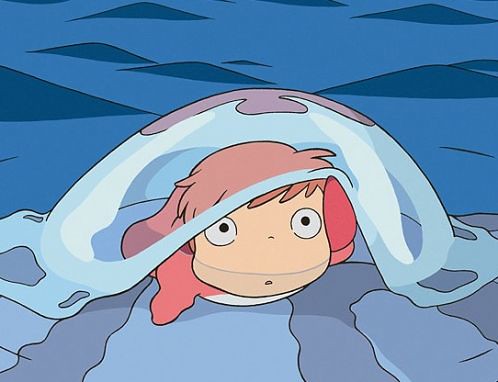 Ponyo on the Cliff by the Sea (Gake no Ue no Ponyo / 崖の上のポニョ) or Ponyo was written and directed by Hayao Miyazaki.  It was released by Studio Ghibli in the summer of July 2008.  Ponyo is based on The Little Mermaid by Hans Christian Andersen.  The animated Japanese film is the follow-up film to Howl’s Moving Castle.  The picture is Miyazaki’s tenth film and the fifth highest grossing anime in history.  The adorable story earned over two hundred million dollars worldwide.

Brunhilde lives underwater with her sisters.  She is a goldfish.  Her papa is named Fujimoto.  Fujimoto Photo Industries Co. Ltd. Is a photographic equipment company.  Papa Fuji is a wizard and a man of science.  He is stern, stern, but fair. The family goes on a submarine adventure and Brunhilde sneaks away from the group on the back of a jellyfish.  She runs into a fishing boat and gets stuck inside a glass jar.  The jar drifts and pivots towards shore.

Sōsuke finds the glass enclosure at the edge of his fishing town.  He grabs a rock and frees the little prisoner.  Glass fragments cut his little finger in the process.  Brunhilde licks the wound and it immediately heals.  Sōsuke is overjoyed and promises to protect her.  He gives Brunhilde the name Ponyo and they head out.  Fujimoto is consumed by grief and sends a series of wave spirits to find his daughter.  They consume the new friends and Ponyo disappears.  Fuji is relived.  Sōsuke is heartbroken.

Fujimoto and Ponyo argue after they return home.  The little fish refuses to be called by her birthname.  She revolts and sprouts a pair of arms and legs.  The feat is possible with the assimilation of Sōsuke’s blood in her system.  Papa is shocked and attempts to change her back.  He succeeds, panics and leaves to find Brunhilde’s mother Gran Mamare.

Ponyo consults her sisters and together they turn her into a full human.  The unintentional magic causes a rift throughout the Earth and imbalance with nature.  The oceans responds and a tsunami overtakes the land.  The siblings gather forces and deliver Ponyo back to Sōsuke on a series of turbulent waves.  He is overjoyed and his mother Lisa allows her to stay.  The raging storm leaves them with limited options.  Lisa heads to the nursing home that she works at to check on the patients.  The kids sleep.

Gran Mamare zooms over to Fujimoto.  The Goddess of Mercy arrives and Fuji witnesses the Moon alternating its orbit.  Satellites plumet and the two talk.  She says that if young Sōsuke can pass a test,  Ponyo can become a human.  Fujimoto reminds her that if the boy fails their daughter will be lost within the sea.  He sighs.  The Goddess smiles.

Ponyo and Sōsuke wake up.  Their house was swallowed by the sea while they were dreaming.  Lisa is missing and they form a search party.  Ponyo uses her magic and transforms Sōsuke’s toy boat into a real one.  The two real ones climb aboard and sail into the tempestuous ocean.  Chaos swirls and the time passes.  Towns pass by and the journey lengthens.  They enter a forest.  Ponyo falls asleep.  The captain wakes her.  She yawns and attempts to ignite a second candle to propel the boat.  She fails and passes out.  The magic wanes and the boat returns to its original size.

Sōsuke drags his friend to shore and finds his mother’s car.  Lisa is missing.  The boy is scared.  Ponyo rises and they continue their search.  They enter a tunnel and Ponyo transforms into a fish.  Lisa and the nursing home residents are nearby underneath the water.  Everyone can breathe due to Gran Mamare’s magic. Fujimoto enters.  He warns Sōsuke that the balance of nature and the precarious future of the planet are at risk.

Papa Fuji begs the child to return Ponyo.  He declines and flees.  Fujimoto captures them and delivers them to the Goddess.  She ends a long conversation with Lisa and turns to the boy.  She asks if he can love Ponyo in her fish form.  He replies that he can and will always love her.  Gran Mamare turns to Ponyo and tells her that she needs to abdicate her powers to become a human.  She nods, places her inside a bubble and returns her to Sōsuke.  He is notified that a kiss will complete the transformation.  The Goddess leaves in an ostentatious fashion.

The world is saved and returns to normal.  Everyone heads back to the freed landform.  The ocean bubbles back to its original depth.  Fujimoto apologizes to Sōsuke and hands him his toy boat.  They shake hands and he leaves.  Ponyo jumps into the air and kisses her friend on the lips and breaks the spell.  She loses her magic and the pair live happily ever after.  The credits roll.  Ponyo ends.