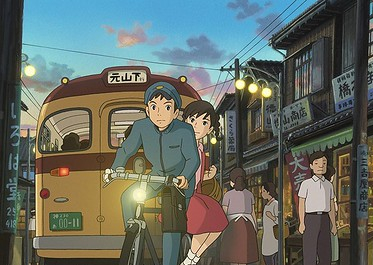 From Up on Poppy Hill (Kokuriko-zaka Kara / コクリコ坂から) is a Japanese animated movie.  It was produced by Studio Ghibli and released in July, 2011.  The film was Ghibli’s follow-up to The Secret World of Arrietty and Ponyo.  Hayao Miyazaki once again stepped away from the directorial role.  He cowrote the screenplay with Keiko Niwa.  From Up on Poppy Hill is based on Tetsurō Sayama’s manga of the same name from 1980.  Miyazaki’s son Gorō Miyazaki was the director.

Critical reception was positive and From Up on Poppy Hill grossed over sixty million dollars worldwide.  GKIDS released an English version in 2013.  It won Animation of the Year at the Japanese Academy Awards in 2012.  It took the same prize at the eleventh Tokyo Anime Awards.  The soundtrack was composed by Tokuma Japan Communications.  The beats were released in 2011.

The year is 1963.  The story is set in Japan before the 1964 Tokyo Summer Olympics.  Umi Matsuzaki is sixteen years old.  She lives in the Coquelicot Manor boarding house.  Her home sits on hill that overlooks the Port of Yohohama’s harbor.  Papa Matsuzaki passed away.  Umi’s mother is a medical professor and lives in America.  She embraces the parental duties and is the matriarch for her brother and sister.  Her kindness extends to the other residents of the manor.  Umi is a caring lass.

The nearby boats are how the seasons are identified in Yohohama.  Every morning the protagonist raises a series of signal flags that state I pray for safe voyages.  Shun Kazama sees the flags on his tugboat commute to school each day.  They make him smile.  He is seventeen.  Umi and Big Shun both attend Konan Academy.  The school administration is pushing to demolish a decayed building that is used as the student’s clubhouse.

The fight for the Latin Quartier is heated and causing a rift throughout the High School.  Shun is leading the charge to save the building.  He jumps off the roof into a pool of water in protest.  Umi witnesses the event and rushes to aid him.  She quickly realizes that it was an attention grab and lets him fall back and disbands her rescue.  Shun smiles.  Umi goes home and talks to her grandmother.

Grandma appreciates everything that Umi does.  The viewers agree.  She talks about Umi’s father.  Emotions run high.  Some flag symbology is present.  Before the heroine makes dinner, her grandma wishes that she finds someone special and will no longer need to raise the flags.  Time passes.  Everyone goes to sleep from up on poppy hill.

The sun rises and Umi and her sister Sora head over to the corroding clubhouse to search for the office of the school newspaper.  They take a peek into various clubs.  The floors are a mess and there is clutter everywhere.  The sisters arrive at the paper’s office and meet Shun.  Sora asks for his autograph.  Umi joins his cause.  Night falls and she hurries home.  They need food and she heads to the market.  Shun crosses her path and gives her a lift on his bike.  He tells her that he sees her flags each morning and gives her a snack. The two grow close. The snack is delicious.

The following day at school, the board declares that they are going to replace the clubhouse.  A debate is held and the numbers are not on Umi and Shun’s side.  Umi hatches a plan to restore the building to sway the majority.   The couple learn about each other and Umi shares a photograph of her father.  Shun has the same one at home.  The two might be related.  Shun was adopted.

Shun avoids Umi and suppresses his love.  He tells her that they are siblings.  They agree to oscillate within the friendzone.  The drama builds from up on poppy hill.  Umi is depressed and loses focus.  She regains it and enlists the help from local store owners for the clubhouse renovation.  The school paper logs the progress and support starts to build.

The weeks pass and the work is finished.  It is too late.  A local businessman has plans to demolish the building.  Umi and the gang manage to postpone the deadline until their progress is inspected.  Umi tells Shun she still loves him.  Shun loves her too.  Umi’s mom comes home and clears the air.  Shun is not her brother.  Umi smiles.

The day of the inspection lands and the businessman is impressed.  He agrees to cancel the destruction of the clubhouse.  The lovers meet a sailor that was in their shared photograph and the plot is tied together.  Umi continues her noble flag raising.  They are hoisted for her father and a secret someone.  A purpose is fulfilled.  From Up on Poppy Hill on ends.

From Up on Poppy Hill Cast

4 comments on “From Up on Poppy Hill”