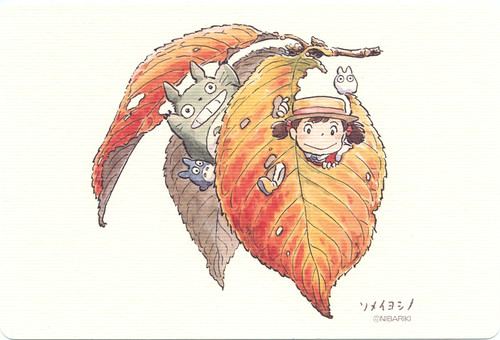 My Neighbor Totoro (Tonari no Totoro /となりのトトロ) is an animated Japanese film that was released by Studio Ghibli in 1988.  Hayao Miyazaki was the writer and director.  The movie continued the success of the studio’s previous films (Laputa: Castle in the Sky and Nausicaä of the Valley of the Wind) and has gained a cult following.  My Neighbor Totoro earned forty-one million dollars at the box office and over two hundred seventy million from video sales.  A quarter billion dollars is small Totoros in comparison to the one billion one hundred forty-two million dollars it has made from merchandise.  The franchise has resonated with the modern ethos.

The adventure begins in Japan during the 1950’s.  The Kusakabe family is moving into their new home in the bucolic countryside.  Tatsuo’s two daughters are waving at the townspeople on the truck ride through town.  Their names are Satsuki and Mei.  The girls are elated and thankful that the move is bringing them closer to their mother Yasuko.  She is hospitalized nearby with a long-term illness.

Mei and Satsuki explore the house and discover a colony of susuwatari or soot sprites.  The girls run into the previous homeowner.  She is an affable older woman that asks to be called Granny.  Granny explains what the sprites are and how they are hardly seen.  The little creatures infest empty homes and leave after accepting the Kusakabes as the new residents.

Time passes and Tatsuo is working from home.  He is a collegiate professor of Archaeology and a busy boy.  Satsuki is at school and Mei is left to her own devices.  She is the youngest and full of curiosity.  Mei runs around and enjoys the outdoors.  Two sets of rabbit-shaped ears pop up in her peripheral.  She is intrigued and follows them underneath the house.  A pair of white and blue colored animals appear and lead her to a giant camphor tree.

Mei enters a hollow in the tree and creeps down the tunnel.  She falls and is greeted by a giant version of the mysterious animals.  He unleashes a giant yawn that sounds like Totoro and Mei misinterprets it as his name.  The two develop an instant friendship and she naps on top of his massive belly.  Mei wakes up and says My Neighbor Totoro is gone.  Satsuki finds her sister alone in a clearing.  Mei is heartbroken, but Tatsuo consoles her and tells her that Totoro is the keeper of the forest and will appear when he wants to.

On a stormy night, the sisters wait at a bus stop for their father’s return.  Their mission is to hand him his umbrella.  Rain is pouring and the elements overtake the landscape.  It is past Mei’s bedtime and she gets tired.  Satsuki props her up on her back and Mei falls asleep.  Totoro materializes next to Satsuki and she recognizes him.  Big T has a tiny leaf on his head to protect himself from the downpour.  Satsuki passes her extra umbrella to him and he is shocked by its effectiveness.  Satsuki smiles and Totoro hands her a bundle of seeds and nuts in exchange.  A colossal Catbus appears and Totoro boards it.  The cat leaves and Tatsuo pulls in.  Everyone heads home.

The sisters plant the seeds.  They water and watch them, but no sprouts form.  Days pass by and the girls awake in the middle of the night to a ceremonial dance.  Totoro and his buddies move and groove around the seeds.  Mei and Satsuki go outside and join the party.  The nuts and seeds experience explosive growth and assimilate into a giant tree.  Totoro takes everyone on a magical ride using a flying spinning top.  Morning rolls in and the huge tree is gone.  Sprouts poke out of the ground in place of the trunk.

The girls are notified that their visit to the hospital is postponed.  A complication with their mother’s treatment has caused the delay.  Satsuki is saddened by the news and yells and her sister.  She pouts and stomps off.  Mei is concerned and decides to deliver some corn to her mother.  The youngest sets off for the hospital on foot.

Mei’s disappearance causes a panic and the neighbors form a search party.  Satsuki decides to travel to the camphor tree and ask Totoro for help.  Totoro is overjoyed to be of assistance and calls the Catbus.  The bus transports Satsuki to her sister and they have a tearful reunion.  Catbus smiles and takes them through the countryside and to their mother’s hospital.

The girls post up on a tree outside the hospital window.  They overhear their parents talking and learn that their mother is doing well and has a simple cold.  The sisters leave the corn on the windowsill and their parents find it later.  Catbus takes them home and vanishes.  Yasuko returns and plays with her children.  Totoro and his buddies watch in the distance and My Neighbor Totoro ends.

8 comments on “My Neighbor Totoro”