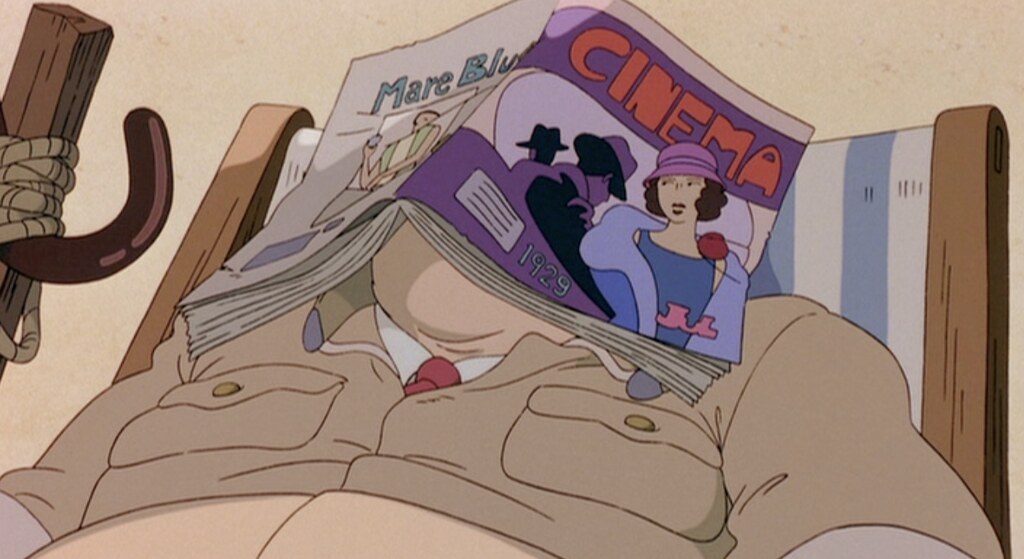 Porco Rosso (Kurenai no Buta / 紅の豚) is an animated film and Hayao Miyazaki’s follow up to Kiki’s Delivery Service.  It was released by Studio Ghibli in the middle of 1992.  Porco Rosso can be translated to crimson pig.  The movie was well received by the critics and made over forty million dollars against a nine-million-dollar budget.  Walt Disney redubbed the film for English audiences in 2005.  A possible sequel is rumored to be in the works.

The story begins in the late 1920’s.  Porco is relaxing on the beach with a magazine over his face.  A boat sails by and lets him know that some air pirates are causing a ruckus.  The hero boards his plane and chases after the Mamma Aiuto Gang.  The gang has kidnapped some kids from a cruise ship and are up to no good.  To make matters worse, there are skulls on their plane.  Bad guys with skulls are the worst.  Porco fires at the enemies.  They fire back and Porco fires more.  His fire is enough and the enemy waves a white flag.  The children are saved.  Their savior heads to a nightclub.

The club is posh and the pirate gang is there too.  They are harassing the owner Madame Gina.  The pirates are injured from the earlier exchange.  Porco is calm.  Two reporters take his picture and try to conduct an interview.  An American pilot named Donald Curtis chases them off.  He is focused on Gina and later talks to Porco.  Mr. Rosso proceeds to eat alone and Gina joins him.  A picture on the wall shows Gina and a group of pilots.  One of them has their face scratched out.  The headless pilot is Porco Rosso before he had the head of pig.  Oink.

A new day arrives and Porco Rosso visits a gunsmith to outfit his plane.  Time passes and he is back on the beach.  A radio broadcast reports on a challenge from the air pirates.  The hero takes off and Curtis appears.  The two get in a dogfight and Porco loses.  His plane goes down and he hides the remains.  Curtis swoops over to confirm the kill and assumes the pig has died.  Curtis was deceived and Porco boards a train with his wrecked plane.

The train lurches to a stop in Milan and the pilot visits his mechanic Piccolo.  His granddaughter Fio is in charge of the repairs and Porco is skeptical.  Fio gets to work and he has a change of heart.  She is skilled and finishes the job without any hiccups.  Porco has the hiccups and they end.  The unusual duo flies back home through the clouds.

Somewhere else, Curtis flirts with Gina.  He claims that he can turn her into a star if she comes to Hollywood with him.  Porco’s plane appears overhead and Gina has a flashback from an earlier and idyllic time.  The mechanic and the pig land in the water to refuel.  Fio complains about the gas price.  The plane leaves and flies into Rosso’s secret lagoon.  Fio is impressed.  The pig yawns.

The teammates are about to relax and are interrupted by the air pirates.  The gang surrounds them and threatens to destroy the new plane.  Fio begs them to reconsider because she worked hard on the repairs.  The pirates are touched and agree to attack Porco Rosso instead.  Arguing ensues and Curtis appears on a nearby cliff.  He jumps down and flirts with Fio.  More arguing and an agreement is made.  Curtis and Porco will fight on the following day.  If the pig wins, Curtis will pay off his debt to Fio.  If big C wins, he gets to marry the mechanic.  The pirates will host the duel. Everyone splits.  Fio goes for a swim and the pig laughs.

Night falls and Fio sees Porco with a human face in the candle light.  He turns towards her and his face morphs back into a handsome pig.  She asks him to tell her a story.  Pigs are excellent story tellers and Fio takes advantage of the axiom.  He tells her a story.  She kisses his cheek.  The two go to bed.

The sun rises.  The planes elevate and the duel begins.  A crowd forms.  The spectators go wild.  Gunfire erupts.  The guns jam.  The gunfire stops.  The fighters land and start to fistfight.  Fists fly and sweat sprays.  Some bruises form and there is no clear leader.  The duelist resort to name calling.  The crowd roars.  Their faces are swollen.  Curtis and Porco knock each other out.  Their bodies splash into the shallow water.  The pig is soaked.  The American is wet.  Porco gets up first.  Gina declares him the winner.

The air force is zooming towards the fight.  Fio leaves with Gina and the pig flees.  He asks Curtis to join him.  He is shocked and they leave.  Time passes and Fio is in charge of a company.  Curtis is an actor.  Gina is beautiful and has grown old.  She is alone.  Porco’s plane is nearby.  Gina has a secret.  Porco Rosso ends.