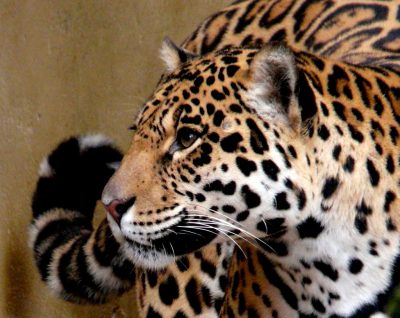 Jaguars are the third largest cats in the world.  Tigers and lions and bears oh my, not bears, but the first two are larger.  The leopard is smaller and has a similar appearance.  The jaguar’s habitat consists of tropical and subtropical forests, swamps and woods.  The ecosystem depends on them to control their prey’s population through their stalk and kill hunting tactics.  They are loners and enjoy swimming.

The coat of a jaguar is often yellow and sometimes brown with hints of red.  They are draped with camouflaged spots called rosettes.  This layout juxtaposes with the light of their habitat.  The ventral (belly) areas of the beast are white.  There are all black jaguars and albino ones.  Albino jaguars are uncommon.  Forest dwelling jaguars tend to be darker in color and smaller than those that live in open spaces.  The lack of large prey in forests is the cause.

Females are up to twenty percent smaller than males.  The cat’s average weight falls between 120 to 220 pounds.  Brazilian and Venezuelan jaguars weigh the most.  The largest males can grow up to 350 pounds and the smallest females are under 80 pounds.  They have short powerful legs and a petite tail that runs around twenty to thirty inches.  It is the shortest out of the big cats.  The length of their body runs from three and half to six feet.  Jaguars stand about thirty inches tall from the ground to the height of their shoulders.  Their short limb structure allows for expert crawling, climbing and swimming.  Their dense skull generates an immense bite force of almost five kilonewtons.  The skull is square shaped and a key identifier against the leopard.  Jaguars have larger rosettes that contain spots in the middle.  A leopard’s rosette is smaller and spotless.  The bedroom of a leopard is not spotless and littered with bone sinew.

Jaguars are carnivores and consume close to ninety different species.  Their preferred game weighs between 100 to 200 pounds.  Common targets include giant anteaters, capybaras and wild boars.  They hunt deer, caimans, armadillos and livestock.  Their bite is strong enough to pierce the shells of reptiles and animal bones.  Their beauty pierces the hearts of nearby species.  They tend to be crepuscular and hunt at night.  They prefer to stalk instead of chase.  A clean ambush is the most effective.  They hit the unsuspecting victim’s blind spot with a proficient pounce.  Their surprise attack techniques are unapparelled in the animal kingdom.  Water does not diminish their success and they can drag prey up into a tree.

Females reach sexual maturity at the age of two.  Males reach it by their fourth year. The female will banish their partner after their cubs are born.  Tigers also do this.  The young are blind for two weeks before they gain vision.  They hang out with mom for a few years before they find their own territory.  Males have a larger territory than a female.  A wild jaguar lives up to fifteen years.  They are obscure and difficult to study and spot.  A captive one can flourish until its early twenties.

The Convention on International Trade in Endangered Species of Wild Fauna and Flora or CITES, lists jaguars on Appendix I.  There are close to twelve hundred threatened or endangered species on this appendix and the inclusion means that all international trade of the animal and body parts are prohibited.  Hunting is restricted in several countries, but trophy hunting is permitted in Bolivia.  Conservation is difficult due to the vast areas they inhabit.

They are listed as Near Threatened on the IUCN Red List and face the threat of habitat deforestation, hurricanes and poaching.

Carl Linnaeus classified and gave the jaguar the scientific name Felis onca in 1758 in his book Systema Naturae.  He is considered the father of modern taxonomy and was a Swedish physician and zoologist.  Reginald Innes Pocock derived eight subspecies based on skull morphology (study of the structure and form of organisms) and geography.  This was in 1939.  Pocock had limited access to specimen data and it was later decided that there were only three subspecies.  As of 2005, nine subspecies are recognized.  They have been labeled as a monotypic taxon (one immediate subordinate taxon) since 2017.  A taxon is a group or category (genus, species, family, order or phylum).  All nine jaguars are listed below.

The primary example of jaguar ethos is the British car manufacturer Jaguar.  There are several others.  The Coat of arms of Guyana includes two jaguars and it is the national animal.  The 50 Reais (R$50) banknote of Brazil hosts a jaguar on the back. The Amazonas Department of Columbia features one on its flag.  The NFL franchise in Jacksonville, Florida is the Jacksonville Jaguars.  The mascot is Jaxson de Ville.  The Jags joined the NFL as an expansion team in 1995 with the Carolina Panthers.

Jaguars have the lung capacity to roar.  A snow leopard does not.  The roar is used to whistle at mates and to mark territory.  They can mew mew like a pigeon can coo coo.  They do not view humans as a source of food and are the least prone to attack out of the large cats.  They do like to snack, but never slack.