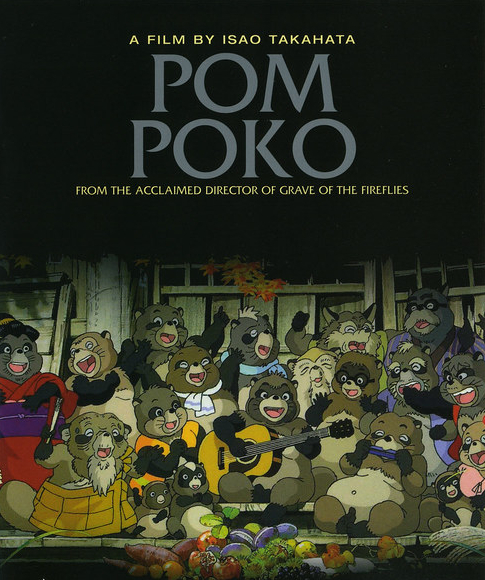 Pom Poko (Heisei Tanuki Gassen Ponpoko / 平成狸合戦ぽんぽこ) is an animated Japanese film.  It was released by Studio Ghibli in 1994.  It was written and directed by the studio’s cofounder and Hayao Miyazaki’s business partner Isao Takahata (October 29, 1935 – April 5, 2018).  Takahata’s first Ghibli film was Grave of the Fireflies, which is considered one of the greatest animations of all time.  Pom Poko won Best Animation Film at the Mainichi Film Awards.

The plot of Pom Poko begins in 1960s Japan on the outskirts of Tokyo in the Tama Hills.  A suburban construction project, nicknamed New Tama, is cutting into the Tanuki’s land and threatening their existence.  Tanuki is Japanese for the ever-adorable Japanese racoon dogs.  The meaning of Pom Poko comes from a 1919 poem written by Ujō Noguchi.  The word refers to the sound of the animals drumming their stomachs.  Time passes and the viewer is taken to the early 1990s.

A pack of Tanukis move into an abandoned house.  The house is large and things are looking up.  A construction crew shows up and begins to demolish the roof.  Things are looking down.  The pack scrambles away.  Natural resources and livable terrain are diminishing.  Fights are common.  A large scuffle between two packs follows.  The racoon dogs transform into modern and traditional soldiers and begin to fight.  A female elder appears and talks sense into everyone.  The fight ends.  They climb a power line and take in the man-made gentrification that has become their true foe.

The town elder Tsurukame Oshō holds a meeting.  He has a plan.  His scheme involves using the Tanuki transforming science to defend their territory.  The gathered discuss improving their own culture to rival the humans and seeking the assistance of the great Tanuki sages of Shikoku.  A boot camp is formed and everyone practices their transformation magic.  Some are successful, some are not.  The most skilled head out and begin their quest.  The magic is draining and they consume copious amounts of energy drinks to maintain their stamina.  The beverage cost is too high and another conference is called.

The Tanukis try guerilla tactics next.  The stakes of Pom Poko are raised.  Truck hijacking and false bridges cause the deaths of several people.  The project does not stall and the humans continue their plans.  The elders call for a period of silence to mourn the lives they took and regroup their resources.  Gonta is one of the largest and suggests total war and the eradication of mankind.  The other Tanuki tell him to pump the breaks and note that eliminating humans would mean eliminating their cuisine.  Gonta ponders and agrees.  The man simply loves tempura.

The power of tempura dissuades a bloody climax.  The racoons decide to use scare tactics instead.  They transform into ghosts and harass the local workers.  They run off in fear and the Tanuki celebrate.  The sun rolls in with a new a fresh construction crew.  The celebration ends.  The sages arrive.  They are powerful and level up the Tanuki’s magic.  Everyone forms a ghost parade and they head to town.

The antagonists are successful, but the oldest sage overexerts himself and dies.  The follow-up television broadcast is up in arms and rumors are everywhere.  The president of the New Tama project explains that it was a special effects demonstration and the uproar quiets.  The Tanuki lower their cute little heads in defeat.

One of the sages has a meeting with a Kitsune (fox shapeshifter) and learns that he is behind the new development project.  The Kitsune have also lost their land and have integrated into society.  The new construction will have an amusement park and they plan to work there for money.  The elder acknowledges the wit, but concludes it is untenable for the Tanuki because some of the members are unable to transform.  Yet another plan is formed.

The elder and the boys rob the president of the construction company, but are double foxed by the Kitsune.  One final effort is deployed where the racoons combine their magic to restore the land to its original luster.  The idea is to convince society to halt their destructive tendencies.  The effort is ephemeral and the magic wears off.  They concede defeat.

Time passes and some of the Tanuki join human society.  The less powerful fade into the landscape.  The film concludes with one of the racoons returning home from his business job.  He is worried about the fate of his friends during rush-hour.  He spots some feral Tanuki running down the road and follows them.  He is led to a golf course and walks into a racoon party.  Elation floods his face and he strips down and transforms into his true self.  His kind is alive and well and all hope is not lost.  Pom Poko ends.