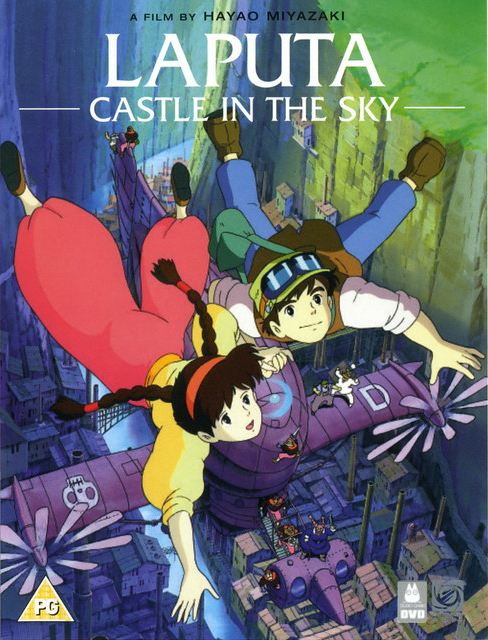 The film begins with an airship cutting through cloud cover.  The main protagonist Sheeta is one of the passengers and is the owner of a mysterious blue stone pendant.  She is being guarded by Colonel Muska.  Big Muska is a secret government agent who has abducted the heroine.  The whole kidnapping thing has ruined the vibe of an otherwise pleasant evening sky cruise.

The plot escalates and a pirate gang led by Dola storm onto the ship.  The pirates are searching for the blue necklace and chaos breaks out.  During the pandemonium, Sheeta breaks free from Muska and knocks him unconscious with a wine bottle.  She retrieves her jewelry and the invaders appear.  She tries to escape on the exterior and ends up falling into the nighttime sky.

Sheeta freefalls towards her inevitable demise and the necklace explodes with light.  The power of the stone slows down gravity and escorts her to the ground safely.  A young miner named Pazu notices the light during the descent.  Little P heads towards the source and catches Sheeta.  He takes her to shelter and attempts to notify his boss Mr. Duffi of his discovery.  The day ends and Pazu leads Sheeta to his home.

The morning rolls in and Pazu is blasting sweet, sweet tunes out of his trumpet.  Sheeta awakes and they formally introduce themselves to each other.  Pazu asks to see the stone and cannot reduplicate its power.  Sheeta is captivated by a picture on Pazu’s wall.  He tells her that it is of the legendary kingdom of Laputa and was taken by his father and his life goal is to take flight and rediscover Laputa for himself.  Their discourse is interrupted by the pirates.

Pazu’s mind spins and he disguises Sheeta as a boy.  The couple head into town for assistance.  The pirates cut them off and Mr. Duffi and Pazu move to protect the newcomer.  Before the pirates can attack,  Mr. Duffi’s wife Okami opens a path for them and they escape through a backyard.  A brawl erupts between the pirates and the townsfolk and Sheeta and Pazu escape on a train.  The pirates find them and Muska and the military arrive.  The clash begins and the good guys fall off the train tracks.  The necklace saves the day again.

Pazu and Sheeta land in an abandoned mineshaft.  The pair progress through the depths and run into a geriatric miner named Uncle Pom.  He leads them to his camp and shows them magical glowing rocks called Aetherium.  He cracks one open and the illumination fades.  Sheeta’s necklace brightens and Uncle Pom is amazed.  He explains that it is pure Aetherium and that the people of Laputa were the only ones able to create a pure crystal of Aetherium.  Pom continues and says the folks from Laputa constructed a castle in the sky with the Aetherium technology.  Sheeta and Pazu have a moment of clarity and realize that Laputa does exist.

The kids say goodbye and Muska captures them.  The antagonist takes them to a military fort and the friends are split apart.  Muska talks to Sheeta and shows her a robot the government discovered.  The markings on the discovery match her necklace.  He continues and reveals that if her necklace is activated, it will lead them to the castle in the sky.  All they need is the spell.  Muska drones on and unveils that Sheeta is the heir to Laputa and her real name is Lusheeta Toel Ul Laputa.  Sheeta says goodbye to Pazu in order to protect them.  The heiress is alone and in distress.

Pazu goes home and runs into the pirates.  They talk about how Sheeta is in danger and they join forces.  Sheeta slips into her memories and remembers a spell from her grandmother.  She recites it and the robot comes to life as her necklace activates.  Muska interrogates her to learn the enchantment and the robot goes nuts and destroys the base.  The robot protects Sheeta and the pirates arrive.  They are able to save her and take her aboard their airship named Tiger Moth.

Dola assigns the kids work and they go about it.  Sheeta tells Pazu about her grandmother’s spells.  Pazu is in awe and hears about the Spell of Destruction that should never be used.  Sheeta is conflicted and does not want to endanger her new friend’s lives.  Pazu alleviates her discomfort.  Muska and the villains arrive and the friends escape on a kite.  A storm kicks up and they head towards the center of it.  The storm consumes them and they land on the castle in the sky.

Laputa is abandoned and they find a robot.  It leads them around and Muska appears.  The military floods the scene and they realize that the pirates were captured.  Muska restrains Sheeta and takes her into the castle.  The villain is right at home and reveals that he is a descendent of Laputa too.  His true name is Romuska Palo Ul Laputa.  Romuska talks to his compatriots and is betrayed.  He was aware of their schemes and ends up countering their assault.  The military is annihilated.

Sheeta is sad about the loss of life and runs away.  She runs into Pazu, but is separated by a wall.  Sheeta is nervous and passes him the necklace through the barrier.  Muska pops in and tries to kill the boy.  He fails and they run away.  Muska captures Sheeta.  Pazu regroups with them and tells Muska that he will not give up the jewelry if he harms Sheeta.  He requests to speak with her and Muska allows them to do so.  He has the upper hand and assumes nothing will come of it.

Muska was wrong and the children recant the Spell of Destruction.  Part of the castle in the sky disintegrates and Muska falls to his death.  The pirates escape and the friends head out on their kite.  Everyone regroups and celebrates.  Sheeta and Pazu say their goodbyes to the pirates.  Laputa: The Castle in the Sky floats into space during the credits.

2 comments on “Laputa: Castle in the Sky”