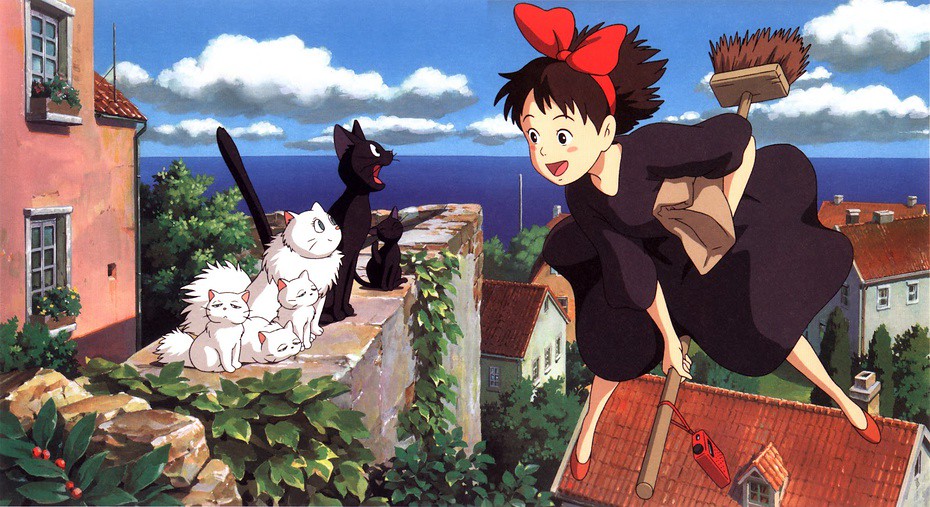 Kiki is thirteen years old and a witch in training.  One morning she is resting in the landscape and looks into the sky.  Wind blows around as she listens to the radio.  The evening forecast reveals that a full moon and clear skies are incoming.  She pops up and runs home to meet her mother Kokiri.  Mama smiles and Kiki tells her that she intends to depart at nightfall.  It is witch tradition to leave home during a full moon to begin training.  Papa Okino shows up and gives her a purple cloak.

The brilliant skies darken and her friends and family send her off.  Kiki scoops up Jiji, her talking black cat and heads out.  She meets a witch and she explains the challenges of traveling to a foreign town and tells Kiki her fortune.  The pair split apart and Kik boards her broomstick and soars to the city of Koriko.  The ride is uneventful and she runs into a boy that is obsessed with flying.  His name is Tombo and he cannot get enough of her broomstick.  Time passes and she wanders into a bakery.

The owner of the bakery is a pregnant lady named Osono and business is booming.  The number of orders is overwhelming her and Kiki offers to help in exchange for a place to stay.  Kiki’s Delivery Service is born in an instant.  The new friends name it “Witch Delivery Business” after careful calculation and marketing consideration.  Kiki receives her first order and prepares to deliver a birthday gift for one of the bakery’s regulars.  Tombo watches the preparation and wishes he could fly.

Kiki takes off and the complications begin.  The wind disturbs her flight path and she drops the gift into a nearby crow’s nest.  The gift is a black cat toy and Jiji berates her for her clumsiness.  She tries to secure the package, but the birds attack her in order to protect their eggs.  Kiki arrives at her destination and Jiji pretends to be the toy to buy her time.  Kiki begins her search for the delivery and finds it at the cabin of an artist named Ursula.  The painter is a kind soul and repairs the toy for her.  Kiki thanks Ursula and is able to make the swap and save Jiji.  The cat and the witch head home.

Depression sets in when Kiki’s Delivery Service goes stagnant.  She accepts a party invitation from Tombo and his boys from the Aviation Club.  Before the event, she makes a quick delivery to an older woman called Madame.  Madame feeds her and she is late for the party.  Kiki makes one last drop off and the elements consume her.  A rainstorm causes her to fall ill with exhaustion.

The heroine recovers and Osono secretly has her make a delivery to Tombo to rekindle their friendship.  Tombo is overjoyed and Kiki apologizes for her truancy.  Big T is unconcerned and shows her around town.  He introduces her to his friends and a bicycle that he has repurposed into a flying machine.  Tombo’s friends are intimidating and Kiki leaves in embarrassment.

The recent events place Kiki in a slump and she loses her ability to fly and speak with Jiji.  Her cat ignores her and starts hanging out with a white cat instead.  The setbacks place the delivery service in jeopardy and Ursula pays her a visit.  The painter decides that Kiki is suffering from an artist’s block and shows the witch her latest canvas.  They talk and Kiki begins to relax.  Ursula suggests that if she can discover a new purpose, her powers will return.  The painter leaves and Kiki goes to sleep.

The sun rises and the witch watches the news.  The report is commentating on a recent airship accident and Tombo is shown hanging from the vessel’s mooring lines.  Kiki doesn’t panic after discovering her friend in danger.  She grabs a street sweeper’s broom and regains her ability to fly.  Kiki zooms off to the accident site and rescues Tombo right as he slips and plumets towards the concrete.

The friends rejoice and all of Kiki’s powers return.  She writes home now that she has found her purpose and notifies her parents that Jiji and her are happy. The future looks bright. The orders resume and business continues. Kiki’s Delivery Service ends.