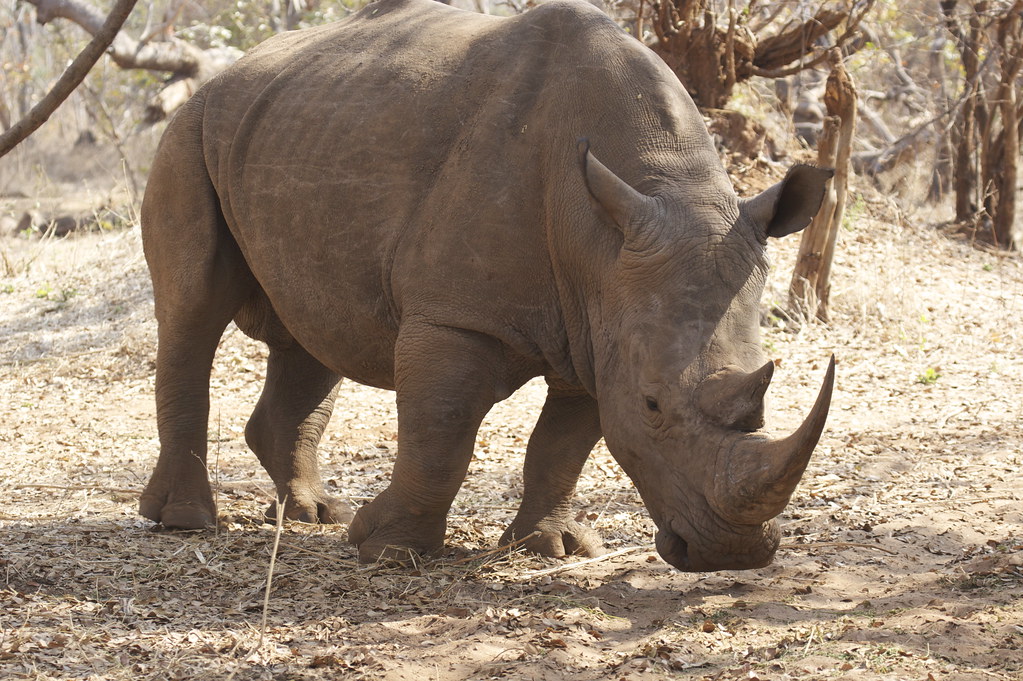 The Rhinoceros is found in Africa and Southern Asia.  It is one of the heaviest animals on the planet and weighs over two thousand pounds.  They have small brains relative to their size and eat a delicious plant-based diet.  The herbivore has a brilliant horn on the tip of its snout.  Their distinctive characteristic is the target of poachers and valued on the black market.

The nickname of the rhinoceros is rhino.  Their favorite faux gemstone is the rhinestone.  Bedazzled rhinos glistening in the sunlight adorn rhinostones.  None have been captured by photograph or video, but the legend continues to spread.  The word rhinoceros stems from the Ancient Greek term ῥῑνόκερως.  The first part (ῥῑνό) means nose and translates to rhino.  The second portion accumulates to horn.  The nose-horn has no true predators.  Humans are the only viable threat to the rhinoceros.  The adults tend to be aggressive, but are easily hunted when they drink from water holes.  Baby rhinos sometimes succumb to the pressure of crocodiles, hyenas and big cats.

The savannah and grasslands are where the white rhinos graze.  They drink water twice a day, but can survive without it for up to five days.  Half of the day is spent eating and a third is rest time.  They cool down in mud holes and are capable of producing several sounds.  Their top speed is thirty-one miles per hour.  Female dominated herds or crashes are formed and how family life congregates.

The Black rhinoceros (Diceros bicornis) is known as the hook-lipped rhinoceros.  They are various shades of brown and grey and eight subspecies exist.  They are classified as critically endangered by the International Union for Conservation of Nature (IUCN).  South Africa, Eswatini, Tanzania, Zimbabwe, Zambia, Malawi, Mozambique, Namibia, Kenya, Botswana and Angola are the countries they are located in.

Mothers form a strong bond with their young.  Otherwise, they are independent and not territorial.  Black rhinos will cross through each other’s domain with limited repercussions.  There is a high mortality rate when fights do break out.  Fifty percent of male-on-male sparring results in death.  Thirty percent of females die in similar interactions.  They have no natural predators.  On rare occasions a crocodile will attack an adult and a lion might confront an adolescent.

The Javan rhinoceros (Rhinoceros sondaicus) is also called the Sunda rhinoceros or lesser one-horned rhinoceros.  They are one of the most endangered species on the planet.  Less than one hundred exist in the world today.  Their home is on the western side of Java in Ujung Kulon National Park.  They live in the dense rain forest and surrounding grasslands.

The rhinos run between seven to thirteen feet long.  They weigh up to five thousand pounds.  Females and males are symmetrical in size.  Javan rhinos have the smallest horn out of all of the rhinos.  They have a heightened sense of smell and exceptional hearing, but their vision is poor.  They live around thirty to forty-five years old.  A mosaic pattern fills their hide and gives them an armored shaped appearance.

Poaching and a loss of habitat over the generations have contributed to the decline of the rhino.  Conservation efforts have helped, but the limited size of their home perpetuates issues.  Depression and inbreeding are two of the main problems.  Their population margins are razor thin for a conservation-reliant species.

The Indian rhinoceros (Rhinoceros unicornis) has a few eponymous names that include the great Indian rhinoceros, the greater one-horned rhinoceros and the Indian rhino.  They are found in India and listed as vulnerable on the International Union for Conservation of Nature Red List.  Southern Nepal and West Bengal are the most populated areas.

They are twelve feet long and stand up to six feet ten inches tall.  The male rhino clocks in under five thousand pounds and the females weigh around three thousand five hundred pounds.  Their skin is a mixture of browns, grays and pink.  An abundant presence of blood vessels in their tissue produces the pink coloring.  Bumps cover their shoulders and upper legs.

Adult males live alone.  Females and their calves form groups with up to six adults.  Indian rhinos are master swimmers and can reach speeds of thirty-four miles per hour on land.  Tigers are their only predators.  Disease ridden parasites and sepsis are other natural enemies to the species.  Hunting for sport and poaching are their unnatural foes.

The Sumatran rhinoceros (Dicerorhinus sumatrensis) or the Asian two-horned rhinoceros and hairy rhinoceros is the smallest rhino.  It is under five feet tall and ten and a half feet long.  They average under two thousand pounds.  The biggest recorded was a meager four thousand four hundred and ten pounds.  A brilliant brown and red hair filled coat covers their body.

The rhinos live in eastern India, Burma and Bangladesh.  They have been spotted in areas within Vietnam, Laos and Cambodia.  Most feed at night and in the early hours of the morning.  They eat over a hundred pounds of food a day.  Their favorite food is tree saplings.  Their diet is rich in fiber and moderate in protein.  Salt is important to their survival.  They receive the sodium nutrients from hot springs, salty water and seepages.

Sumatran rhinos are the most expressive of the species.  Three distinct noises are emitted.  A whistle noise is the loudest and is capable of rattling iron bars.  It signals that danger is near or the rhino is ready to mate.  An eep is close to a yelp and the most common sound.  The whale noise is the second most popular.  It can last from four to seven seconds.