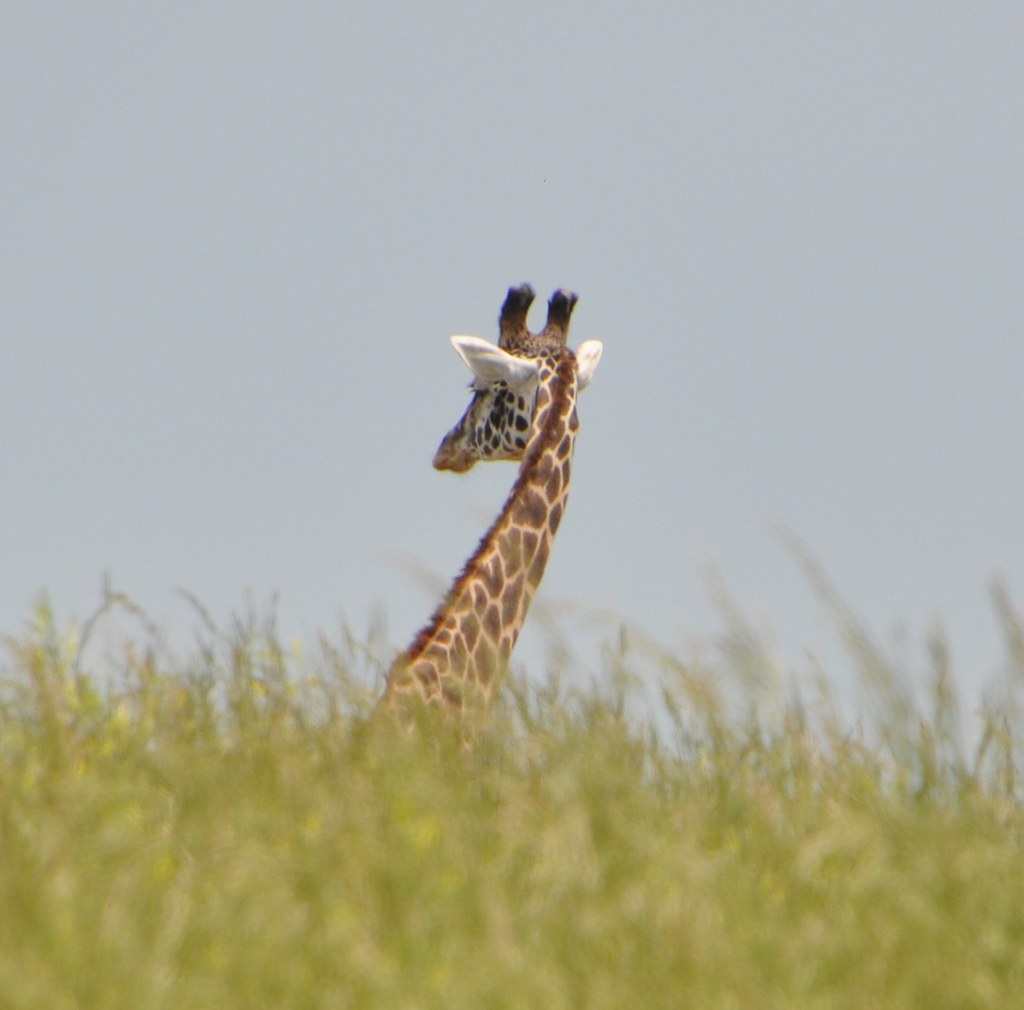 The giraffe is the tallest land animal.  The elephant is the biggest.  If a giraffe and elephant suited up in medieval armor and fought a lion, they would become the lion king.  Disney had planned to include an elephant and giraffe assimilation in their original animation, but the symbiotic relationship was left out.  The lead writer who led the push had the movie poster planned out to include “Come witness the assimbailation!” and “Revel in the simbaiosis.”.  The art review was a failure, but the egregious spelling errors were noted and Simba was born.

The Arabic word zarāfah is the origin of the giraffe.  It can be translated as fast-walker.  The long and powerful legs of the animal can relate.  The early English language had two versions (ziraph and jarraf).  They were both derivatives of the Arabic spelling.  Gerfaunt, gyrfaunt and orafle arose from middle English.  The Italians used giraffa in the late 1500’s.  The French cleaned it up and added an “e” with girafe.

Male and female giraffes both have horns called ossicones.  They are formed from hardened cartilage through ossification and thus the name.  Their purpose is to aid in male-on-male combat and for regulating the animal’s temperature.  The skull of the male strengthens and hardens over time.  A bump forms on their crown.  Both features help in battle.  The front of a giraffe’s jaw lacks teeth and forms a groove.  The back is lined with rough molars.

The front and hind legs of a giraffe are the same length.  Supporting ligaments help balance their heavy upper body.  The backs of their feet are lower and close to the ground, which also regulates their equilibrium.  Their hooves are a foot in diameter.  Male hooves are half of a foot high and the females are four inches tall.  When they gallop, their back legs move before the front ones.  Walking is achieved by moving both legs on the same side in unison and then alternating to the other.  Giraffes can sprint at speeds close to forty miles per hour.

Giraffe tongues are black and purple in color.  The palate helps prevent sunburn.  They are eighteen inches long and used for grooming and grabbing delicious plants.  The upper lip is littered with hair to protect themselves from thorns.  Their fur is white and cream colored.  Orange, black and brown patches lay on top.  The blotches help camouflage them from predators.  The males get darker with age.  Giraffe skin is gray and tan and thick enough to deflect puncture wounds from sharp bushes.

The most recognizable feature of a giraffe is their neck.  It is seven to eight feet in length.  It is a result of elongated cervical vertebrae and not the inclusion of extra vertebrae.  Each one is almost a foot long.  The expansion happens sometime after birth.  This helps manage pain for the mother when delivering their young.  Muscles, ligaments and bones support the neck and are anchored with a thoracic vertebrae that gives giraffes a hump.

Charles Darwin hypothesized that giraffe necks evolved so they can reach food other animals could not.  The height allowed them to consume more in the canopy and avoid the more competitive low ground.  Recent studies concluded that animals with longer necks had shorter lives due to the necessary nutrients it takes to maintain them.  Other theories maintain that the neck helped males when fighting to win over females (necking).  The neck’s true origin is nebulous and likely formed for a mixture of reasons.

Necking is when male giraffes battle for dominance.  There are low and high tensity bouts.  The calmer necking involves leaning and rubbing against each other, while maintaining posture.  The winner is the one who stays in balance.  High intensity fights involve neck swinging and actual blows.  The skull is the catalyst of the damage.  When the fight ends, both parties console each other.  Giraffes may be animals, but they have immaculate decorum.

Giraffes tend to inhabit open woodlands and savannahs.  Some species live near the desert.  They feed on fruit, grass, shrubs, bark and twigs.  They are herbivores, but sometimes take nutrients from carcasses and lick animal bones.  Food is abundant in the wet season and the animals eat independently over a wide area.  The dry season reduces food sources and the giraffe group together when they feed.  Their digestive system is efficient and the plants they eat are filled with nutrients.  This allows them to consume less than the average herbivore.  Peak feeding hours are in the beginning and end of daylight.  Giraffes sleep at night.  Their dreams are a mystery.