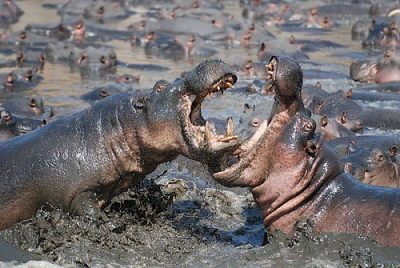 The hippopotamus is a bold and round semiaquatic animal from Africa.  It is known as a river or common hippopotamus.  It has been called the Hiphopopotamus by New Zealand’s fourth most popular guitar-based digi-bongo acapella-rap-funk-comedy folk duo, Flight of the Conchords.  A Hiphopopotamus has been sighted in the wild, but never captured on film.  There are a few low-quality photos from unverified sources.  The most esoteric nickname of them all is the hippo.

Hippos are the third largest (non-extinct) land mammals on Earth, behind the rhinoceros and elephant.  The jaguar is the third largest cat.  The length of the hippopotamus is between nine and 16.5 feet.  The tail is included and averages about one and a half feet in length.  They are too short to play basketball and ride some rollercoasters at four to 5.5 feet in height.  The average weight of an adult male is 3,300 pounds!  Females come in a little under three thousand pounds.  That is more than a Honda Accord (2854 lbs).  The top three hippo weights on record are 5,860, 7,050 and 9,920 pounds accordingly.  The biggest boys in the wild are almost 4,400 lbs and they grow throughout their entire lifespan.  The ladies stop in their mid-twenties.

The skeletal structure of the hippo is graviportal (designed to move slow on land to control large body weight).  Their mass allows them to sink and move along the bed of a river.  Small legs developed due to the duration they spend in the water.  The liquid mitigates the weight burden.  They can reach a fast pace of under twenty miles per hour.  Hippos cannot jump (another reason basketball is off the table), but can climb hills.  Their jaw is proportioned in a manner that allows them to open it close to 180 degrees without any tissue tears.  The teeth sharpen by constant grinding and the lower incisors and canines do not stop growing.  They can reach up to 1.8 feet and are used for combat.  The molars are for chewing delicious grass.

Business is slow for the hippopotamus barber.  Hippos have almost no hair.  They do have a lot of skin that protects them from predators.  It is about two inches thick and a mixture of purple, gray, blue and black in color.  Pink and brown hues around the ears and eyes contrast with the other colors.  A natural skin secretion discharges two pigments that cover the hippo’s body.  The pigments are acidic and protect them from the hot sun’s ultraviolet rays and disease-ridden bacteria.  The natural sunscreen keeps them beautiful by preventing the skin from cracking and regulating their internal temperature.  They live between forty to fifty years old.  Some live into their sixties in captivity.

Genetics show that sometime during the Pleistocene (Ice Age) the hippopotamus population increased due to the expansion of large bodies of water.  The loss of fresh water is the greatest threat to the population today.  Poaching is an issue too.  The International Union for Conservation of Nature (IUCN) has them listed as a vulnerable species on the IUCN Red List.  The hippo population is estimated to be between 125 to 150 thousand and is on the decline.  The Republic of the Congo has seen the largest decrease where hippo meat is a delicacy and the teeth are a substitute for ivory. The word hippopotamus is Latin for horse of the river.  Híppos means “horse” and potamós, “river”.  Slam them together and you get horse-river and the meaning of the name.  They are delegated into five subspecies based on geographical location and skull differences.  This can be observed below.

Hippos belong to the Hippopotamidae family and the order Artiodactyla, with the even-toed ungulates (hoofed animals that support their weight equally on an even number of toes).  Deer, pigs and camels belong to this order.  The full Scientific classification is broken out below.

Savannah and forested areas house the hippopotamus.   Submergible water and an abundance of grass are the main requirements.  Most live near freshwater, but some inhabit estuaries (brackish water that feeds into the ocean).  The big boys (and gals) spend most of their time in the water and pop out at night to graze on grass.  They feed for up to five hours and consume almost 150 pounds a night.  Their ravenous appetite and presence can alter the channels and waterways of their habitat.  They are capable of eating meat, but their stomach is not suited for it.  Their size and aggression tend to keep them off of the menu of their lion and Nile crocodile neighbors.

It is unknown why hippos stay close together in their pods.  They do not form social bonds.  The grouping is separated by gender.  They graze alone and communicate by grunting.  Their territory is marked by poop.  Females mature by the time they turn six and males reach maturity at seven.  Conception takes place at the end of summer in the water.  The pregnant females isolate and give birth within two weeks.  The birth is underwater and the calves weigh between 60 and 115 pounds.  They have one offspring. Sometimes they have twins for a grand total of two.  The hippo mother is loving and protective of her young.  The young hitch a ride on their mother’s back when the water is too deep.

Pablo Escobar purchased four hippos from New Orleans and exported them to Columbia in the 1980’s.  He kept them at his private residence.  They were too difficult to capture after his death and were left unattended.  The population has increased to sixteen and exponentially grows today.  Society’s fascination for the hippopotamus grows at the same rate.