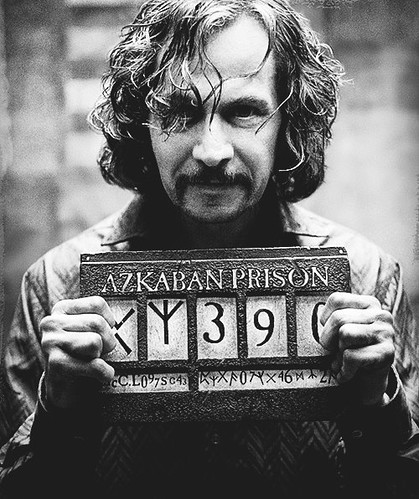 Harry Potter and the Prisoner of Azkaban follows Harry’s successful conquest of the Chamber of Secrets.  J.K Rowling’s third installment in the series was released worldwide in the middle of 1999.  The adventure begins in traditional fashion over summer break.  It is midnight and Harry turned thirteen.  He is doing homework during this placid occasion.  He never receives gifts or acknowledgement when he is in the custody of his relatives.  This time it’s different.  A few owls drop by and he receives presents.  These include a textbook (The Monster Book of Monsters), a Broomstick Servicing Kit, various cards and a letter from Hogwarts requesting parental permission to visit Hogsmeade, the wizard occupied village.  Teenaged Harry falls asleep.

The next morning Uncle V goes to pick up his sister at the train sister.  Harry is horrified of the announcement.  He eats breakfast and learns that a dangerous convict named Sirius Black has broken out of prison.  With the arrival of his aunt and escaped convicts, Harry’s birthday takes a dark turn.  It’s still morning and the atmosphere is serious.  Aunt Marge arrives and praises Dudley (aka Big Duds).  She later insults young Harry and his deceased parents.  His anger explodes and he subconsciously inflates her body.  Tempers fly and Harry threatens U. Vernon at wandpoint and runs away from the Dursleys.

Harry stumbles out into the night and spots a giant form in the shadows.  Maybe a dog.  He panics and is saved by the Knight Bus (a service for hitchhiking wizards and a homophone for the current time of day).  The young conductor Stan Shunpike accosts him and he gives the pseudonym Neville Longbottom.  Harry overhears a conversation about the escapee.  Sirius was a Voldemort disciple and fled from the wizard penitentiary, Azkaban.  He was doing time for murder.  The bus stops in Diagon Alley and Harry is met by the Minister of Magic.  Cornelius Fudge is relieved and gets him a room at the Leaky Cauldron where he will stay until the schoolyear begins.  Fatigue sets in and HP dissolves into his bed.

Harry meets up with Hermione and Ron and they catch up on their summer adventures.  Ron buys rat tonic for Scabbers.  Hermione buys a cat and names it Crookshanks.  Ron is not pleased.  Harry overhears a second conversation about Black and learns he broke out to kill him.  He isn’t unsettled knowing that Hogwarts is safe.

The friends catch the train to Hogwarts and Harry unveils the truth about Sirius.  They discuss Hogsmeade.  A disheveled man sleeps in their compartment.  Crookshanks and Scabbers tussle.  Malfoy stops by to taunt Ron.  The train halts and the lights cut out.  A cloaked creature appears and Harry passes out.  He learns that the creature was a Dementor and that the sleeping man is named Remus Lupin and he is the new Defense against the Dark Arts teacher.  He dispelled the danger by shooting a silvery spell at it.  Everyone eats chocolate.

The students learn that the Dementors are the Azkaban guards and on campus to protect them from Black.  Hagrid is now the teacher of the Care of Magical Creatures class.  He introduces the students to Hippogriffs.  Malfoy continues to taunt and a Hippogriff named Buckbeak attacks him.  Pestilence and Hippogriffs do not mix.

A black dog is spotted by Harry during a Quidditch match.  Dementors appear near the field and he drops from his broomstick.  The broomstick soars into his old acquaintance The Whomping Willow (Salix alba L.).  It is destroyed.  He is distraught that the Dementors affect him more than other students.  Lupin promises to teach him a spell to ward against them.  The Weasley twins give him a map.  It is naked to the human eye, but with a wand tap and the phrase “I solemnly swear that I am up to no good,” a layout of Hogwarts (including the secret passages) and its’ occupants appear.  It is called the Marauder’s Map and signed by Padfoot, Prongs, Moony and Wormtail.  Black appears on campus, but is not caught.

The Marauder’s Map guides Harry to Hogsmeade.  He meets Ron and Hermione and finds out that Sirius Black is his godfather and responsible for his parents’ death.  The trio visit Harry sometime later.  They find out that Buckbeak is going to be executed for lashing at Malfoy.  Christmas falls on the castle and Harry receives a Firebolt (top of the line broomstick).  Harry begins to practice anti-Dementor magic with Lupin.  He learns the incantation is Expecto Patronum and makes progress.  Lupin tells him that a Dementor gives its victim a big kiss that is capable of sucking the soul out of the recipient.  Harry thinks that is no good.  In fact, it sucks.

Crookshanks attacks Scabbers who’s location is unknown.  Ron is upset.  Black breaks into the Gryffindor common room, but vanishes.  Harry and Ron visit the Shrieking Shack (haunted house) at Hogsmeade.  Snape catches them and he confiscates the map.  Lupin takes it.  Time passes.

Ron finds Scabbers at Hagrid’s hut.  He escapes and Crookshanks and a large black dog appear.  The dog attacks Ron and pulls him into the Whomping Willow.  The tree thrashes, but a hidden knot is pressed and the lashing branches freeze.  Crookshanks darts in and Hermoine and Harry follow.  They find a tunnel that leads them to the Shrieking Shack.  Sirius disarms them and Ron and Crookshanks remain nearby.  The pair are left to their fate and Lupin appears.  He embraces Black and turns to the students.

Lupin returns their wands and reveals that Ron’s rat is a person named Peter Pettigrew.  He was tracking them with the Marauder’s Map and Pettigrew’s name materialized.  It turns out that Lupin is a werewolf and Black, Pettigrew and Harry’s father are old friends and the creators of the map.  They are also unregistered animagi (humans who can transform into an animal).  Sirius’s animal is a black dog.  Snape arrives.

The super friends disarm him and discover that Pettigrew was the one who betrayed Harry’s parents and framed Black.  Lupin grabs Scabbers and reverses his form.  Peter appears and Black and Lupin prepare to kill him.  Harry protests that his father wouldn’t want them to kill and they acquiesce.  They tie him up and head back to Hogwarts.

Peter grabs Ron’s wand and turns back into a rat.  He escapes (like a rat) into the woods and they go after him.  Dementors surround and capture Sirius Black.  They turn on Harry and he passes out.  He awakes in the hospital ward.  Dumbledore gathers Hermione and Harry.  He tells them that he believes that Black is good and that they have two lives to save.  Hermione reveals a time-turner device that allows the user to travel back in time.  The dynamic duo warp backwards to save Buckbeak and Black.  They are saved and B.B. fly off into freedom far away from Azkaban.

Lupin resigns and the kids take the train home.  Ron invites Harry to stay for the summer.  Harry receives a letter from Sirius explaining he is safe and gives him permission to visit Hogsmeade next year.  It was a pretty good year. Maybe two thumbs up.  Maybe three for the third arc in the story. Harry Potter and the Prisoner of Azkaban deserves it.

0 comments on “Harry Potter and the Prisoner of Azkaban”