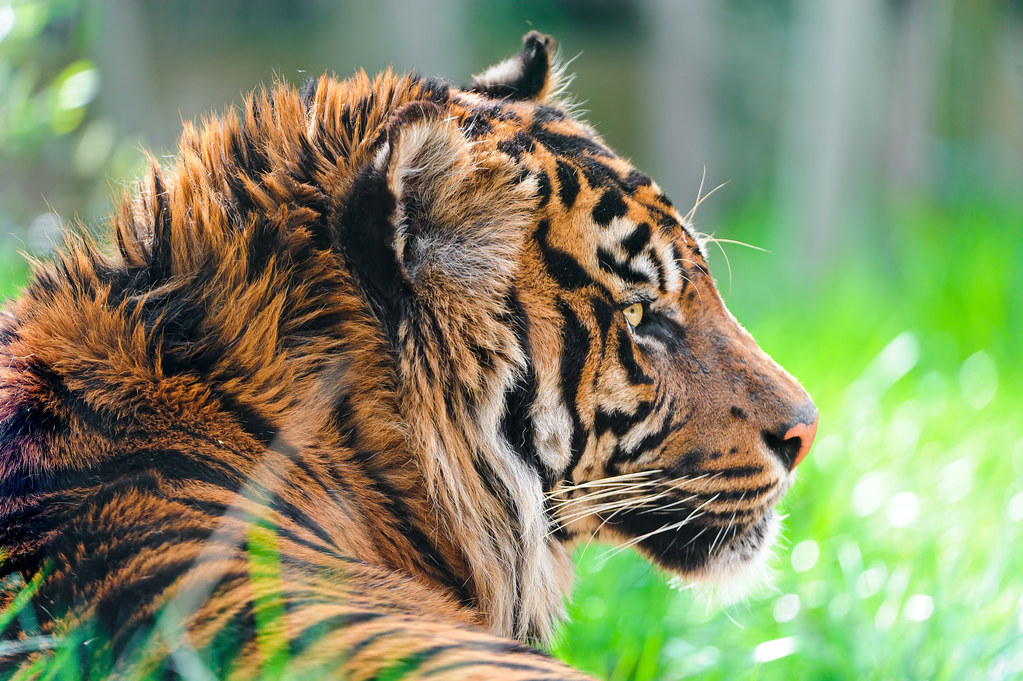 Tigers are a member of the exclusive Panthera genus.  Jaguars, Lions and leopards also have P Cards.  The apex predator is the largest living cat species in the world.  The IUCN (International Union for Conservation of Nature) Red List has marked them as endangered.  Three subspecies have gone extinct (Javan, Bali and Caspian tiger).  Six remain (Bengal, Indochinese, Malayan, Siberian, South China and Sumatran tiger).

The first mention of tigers is found in the Middle English word tigre and the Old English phrase tigras.  The characters were drawn from the Classical Greek word tigris.  The Persian word tigra has melted into the derivation.  It means sharp or pointed.  Panthera is related to the Latin word panthera and the Ancient Greek word for panther, πάνθηρ.  Le Tigre is an American apparel brand that was founded in 1977.  It is analogue to Lacoste.

Female tigers are much smaller than males.  The boys weigh almost twice as much in the larger subspecies.  Their front paws are wider.  Tiger tracks are a concrete indicator of the gender of the beast.  Scientists suggest that Bergmann’s rule applies to tigers.  The concept is simple and states that animals grow larger in colder environments for the purpose of thermoregulation.

Tiger guys have a length that stretches from eight to thirteen feet long.  They weigh between two hundred and six hundred pounds.  Their heads measure up to fifteen inches on the high end and one foot on the low.  Tiger ladies have a mass range of one hundred forty to three hundred seventy pounds.  They are anywhere between six and half to nine feet wide.  Their beautiful petite skulls are under a foot long.  Siberian tigers are the tallest and heaviest.  Sumatran tigers are the smallest and live in the warmest climate.  Science.

Muscles pulse throughout the tiger.  Their tail and head are half the size of their torso.  Powerful front limbs and a heavy body carry them forward.  Prominent stripes coat their fur and provide camouflage in their vegetation heavy habitat.  Stripes are rare in cats.  Spotted rosettes are the most common.  A tiger’s standard orange coloring also aids in their concealment.  Their coat renders them the color green to their prey and allows them to blend into the grass.  It is all possible due to their victims being dichromats (can only distinguish two primary colors).

The stripes remain when the tiger is shaved.  Small hair follicles are attached to the skin.  Whiskers and a slight mane encase their head.  They do not have jaundice, but their irises are yellow.  White spots sit on the back of their small ears and are important for tiger-on-tiger communication.  The skull is similar to the lion’s and includes a wide nasal opening.  Their long teeth are stout and curved.

What color is a tiger?

Tigers come in three colors.  White, yellow and stripe-less snow white are the variants.  Yellow or golden cats have red-brown and blonde stripes.  The snow whites have a reddish ringed tail and translucent stripes.  They do not have a symbiotic relationship with the Seven Dwarfs.  The white tiger has brown stripes.  Most stripes look black.  There are some rare black tigers that have a gene mutation that creates the illusion through conjoined thick stripes.

Large to medium-sized mammals are the tiger’s favorite dish.  Wild boars, wapiti (elk), barasingha (swamp deer) and sambar deer are the main targets.  Monkeys, rabbits, porcupines, birds and fish are consumed on occasion.  Other predators are not safe.  The top dog (tiger) will hunt pythons, bears and crocodiles.  Rhinoceros and elephants are protected, but scuffles have been witnessed.

Tigers are nocturnal hunters by trade.  They hunt alone and ambush their prey with their dominant features.  Their size can knock the hunted off balance and render them immobile.  A neck bite concludes the tussle after submission.  They can run between thirty to forty miles per hour in short spurts.  If the victim senses their presence and flees before they break cover, a tiger will abandon the attempt.  A horizontal leap of thirty feet is possible.  Their success rate is variable and ranges from fifty down to five percent.  Most prey is dragged into the foliage into their own personal delicatessen.  The effort requires immense personal strength.

Copulation occurs year-round.  The majority of cubs are born in mid to late Spring.  Gestation takes around one hundred days.  Mating is rambunctious and frequent.  Momma T’s bear two to three young on average.  The highest cub count (cc) recorded was six.  Papa T’s do not raise their young. The cubs are born with closed eyes.  They eat meat after their eighth week of life.  Every liter has a dominant child.  It is typically a male, but not always.  They are the most active and go out into the wild before the rest.  Cubs start hunting on their own after a year.  They are independent before year two.  The Chicago Cubs are a baseball team.  They normally hunt for last place in the Central division of the American League.