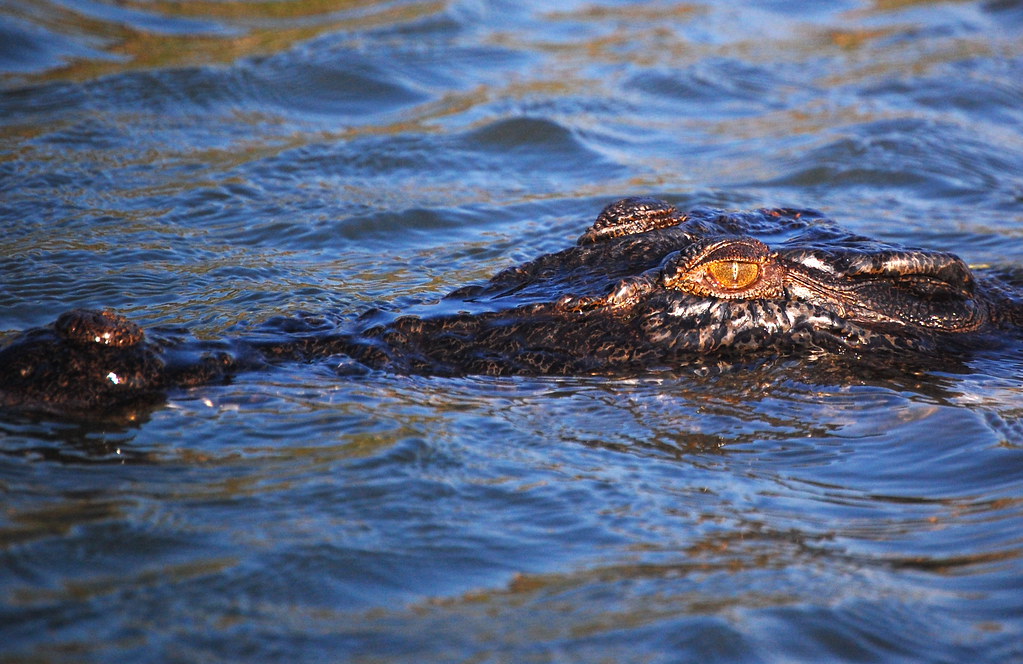 Crocodiles are reptiles and members of the Crocodylidae family.  Caimans and alligators are sometimes called crocodiles, but are associates of the Alligatoridae family.  Crocs, Inc. is a Colorado based company that makes foam clogs.  The business was founded in 2002. It is publicly traded on the Nasdaq under the listing CROX.

The Ancient Greek word κροκόδιλος (krokódilos) is the basis for the term crocodile.  It means lizard and was used to describe the reptile as the lizard of the Nile.  The Ancient Romans used the phrase crocodīlus for the river croc.  Medieval Latin coined the name crocodrillus and Greco Latin developed it into corcodrillion or corcodrillos. Classical Latin used crocodīlus in the sixteenth century.  The modern term crocodile was established afterwards.

Eighteen extant crocodile species roam the globe today.  Size varies amongst them.  Adult dwarf crocodiles grow up to six feet long.  They are the smallest.  Saltwater crocs weigh over two thousand pounds and can exceed twenty-three feet in length.  They are the largest.  Sexual dimorphism is prominent within all species and males are much larger than females.  In captivity, the longest crocodile measured in at twenty feet two inches and two thousand three hundred seventy pounds.  The heaviest lived at the Samutprakarn Crocodile Farm and Zoo in Thailand.  He had a mass of two thousand four hundred fifty-six pounds and was exactly twenty feet.

Lifespan of a crocodile

All crocodiles are polyphyodont and have an average lifespan between thirty to forty years.  They can regenerate all of their eighty teeth up to fifty times throughout their life.  An odontogenic stem cell resides in the dental lamia underneath the tooth.  The large species live about twice as long (sixty to seventy years).  Evidence suggests that some wild saltwater crocs can flourish over one hundred years.

Crocodiles are more related to dinosaurs and birds than most reptiles.  Their ancient appearance is a deception.  Evolution has granted them a four chambered heart and cerebral cortex.  This is a unique feature among reptiles.  Their tongues have salt glands and open pores.  Alligator tongues do not.  Crocodiles release heat through their mouths and sometimes pant like dogs to cool off.  Certain species can climb trees.

The apex predator has sharpened senses.  Their light receptors are filled with rods and cones that can portray color.  Crocodiles have excellent night vision.  A vertical pupil protects their eyes during the daytime.  A third eyelid is activated when they submerge.  Tympanic membranes (eardrums) are manipulated with muscular flaps.  Nostrils are concealed underwater, but are prolific above it.

Size and age affect their diet.  Most eat fish, birds, mammals, amphibians, crustaceans and other reptiles.  Some consume smaller crocodiles.  The practice is taboo.  Nile and saltwater crocodiles have a diverse pallet.  Their diet includes boar, deer and buffalo.  Chewing buffalo is difficult, but not too difficult, but somewhat difficult.  Sometimes they eat fruit.  Crocodile stomach acid is more acidic than any other vertebrae.  Hooves, horns and bones are dissolved in an instant.

Sharp teeth and ferocious jaw muscles subdue a crocodile’s prey.  Their fangs are perfect for containment and not serration.  The initial clasp eliminates the possibility for escape.  The bite force can kill completely.  An adult male has a measured bite of around twenty-two thousand newtons.  In comparison, the American alligator bites with a force right under ten thousand and a great white shark below nineteen thousand newtons.

The Australian freshwater crocodile holds the fastest land speed record at eleven miles per hour.  Some species can gallop and others maneuver through river banks on their stomachs using a tactic called a belly run.  A high walk is used to navigate short paces.  Crocodiles are more social and vocal than any other reptiles.  They do not form groups, but tolerate and enjoy each other’s company.  The sole exception is the saltwater crocodile.  A mature male will never allow another into their domain.

Crocodiles reproduce by laying eggs.  The laying process takes under an hour.  Seven to one hundred are cast (depending on the species).  The temperature of the egg determines the sex.  Anything over ninety-one degrees Fahrenheit will usually be a male.  Females emerge when the eggs are incubated near eighty-eight degrees.  Nick Lachey appears at ninety-eight degrees.  After two to three months the babies hatch and are carried to the water in momma croc’s mouth.  Mortality is high and the mother protects the pod for months.