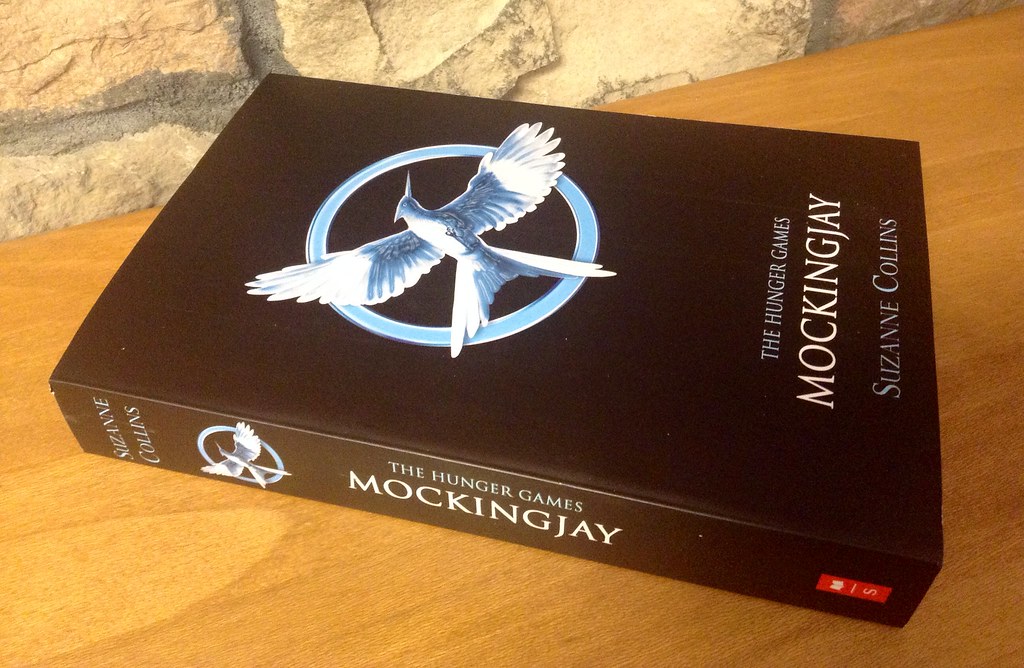 Mockingjay was written by Suzanne Collins.  It was published on August 24, 2010.  Over four hundred thousand five hundred copies were sold during the first week.  The film version was released in two parts in 2014 and 2015.  The plot takes place after the events of The Hunger Games and Catching Fire.  Katniss Everdeen and her allies prepare to move against the Capitol.  Nobody is safe.

Katniss surveys the ruble of District 12 with Gale.  She has a flashback of the Hunger Games and the current state of affairs.  She moves to the Victor’s Village.  It is the only place that is undisturbed.  She grabs some of her possessions and her sister’s cat.  A white rose stands in the foreground.  The flower was a message from President Snow.  Big Snow is always watching.

The pair returns to District 13.  The Capitol published propaganda that it was a wasteland, but it was a lie.  The citizens live underground after a truce was formed.  The region has nuclear weapons and agreed to a standstill.  Katniss witnesses an interview of Peeta on a television.  She tells the President of District 13 (Alma Coin) that she will become the Mockingjay (the image of the rebellion) if her demands are met.  They include Prim keeping her cat,  the ability to hunt above ground, pardons for the captured tributes and the privilege of killing President Snow.  Coin agrees to the terms and they move to a lower floor where the Hunger Games prep team is held captive.

Gale and Katniss go hunting and return to the base.  Coin announces Katniss as the Mockingjay and threatens her if she doesn’t fill her end of the bargain.  Katniss talks to Haymitch and gathers her squad.  A hovercraft drops them off in District 8 with a camera crew.  The area was attacked a day earlier and she interacts with the survivors.  The cameras capture the chaos and film the wounded.  Time passes and bombers arrive.  The squad escapes, but bombs land on the hospital.  Katniss looks at the camera and threatens the Capitol.

The Capitol tortures Peeta in response and sends the interview to Katniss.  Peeta begs her to stop the war.  Everyone lands back in District 13.  Snow broadcasts Peeta in tatters and he calls for a cease-fire.  Beetee hacks the feed and shows footage of Finnick and Katniss to spread hope.  Peeta mentions that District 13 will be attacked.  The residents move further underground in response.  Prim warns Katniss about Snow’s true intentions.  He will not stop until she is broken.

The bombing starts.  The bombing stops.  Haymitch informs Katniss that Coin launched a rescue party to save Peeta and Gale volunteered to help.  The party returns and Gale has minor injuries.  Peeta is alive and attacks Katniss.  She passes out.  She awakens in the hospital later.  Haymitch says the capitol brainwashed Peeta to harm her.  Everyone works to undo the damage.

Katniss and Gale move towards District 2.  The district is loyal to the Capitol and Gale hatches a plan that involves an avalanche.  The Mockingjay is shocked at its destructive power.  Some of the soldiers escape and she asks them to stop.  Someone shoots her.  She recovers and learns she is not assigned to the group that will fight the Capitol.  Coin acquiesces and everyone prepares for battle.

The rebels deploy their force and a teammate is killed.  Peeta is sent as a replacement.  Katniss is furious.  She concludes that the Mockingjay symbol threatens Coin’s existence.  Night falls and the sun rises.  A bomb mangles one of the soldiers.  Katniss tries to save him and Peeta attacks.  She escapes and issues her own orders.  Peeta is handcuffed and they determine that the Capitol and District 13 assume they died.  Peeta asks to be killed.  His request is denied.

President Snow airs their defeat.  Coin interrupts and identifies herself as the rebel leader.  She urges her comrades to fight for the memory of the MockingJay.  The survivors continue on and are ambushed.  Carnage flows and most of the squad dies.  The remaining members disguise themselves as refuges and head towards Snow’s Mansion (Casa de Snow).  The Capitol attacks and bombs the surroundings.  Gale is arrested and Prim dies.  Katniss is depressed and sustains burns from the fallout.

Katniss recovers in the infirmary and learns that the Capitol has fallen.  Snow was captured and Coin is the new president of Panem.  Katniss visits the former president.  He exposes Coin as the true mastermind and the culprit behind the bombings that killed Prim.  Coin has no desire for liberation and intends to be an oppressive ruler.  Katniss has no intention of forgiving her and shoots her during Snow’s execution.  A riot follows and Snow is found dead.  Katniss is found Not guilty of murder due to insanity.  The court sends her back home.

Nightmares plague Katniss and Haymitch watches over her.  Time passes and Peeta returns to normal.  The two rekindle their relationship.  Years pass and they get married.  They have two children and the Hunger Games are abolished.  Katniss continues to have lurid flashbacks of violence, but her family helps her heal.  Mockingjay ends.