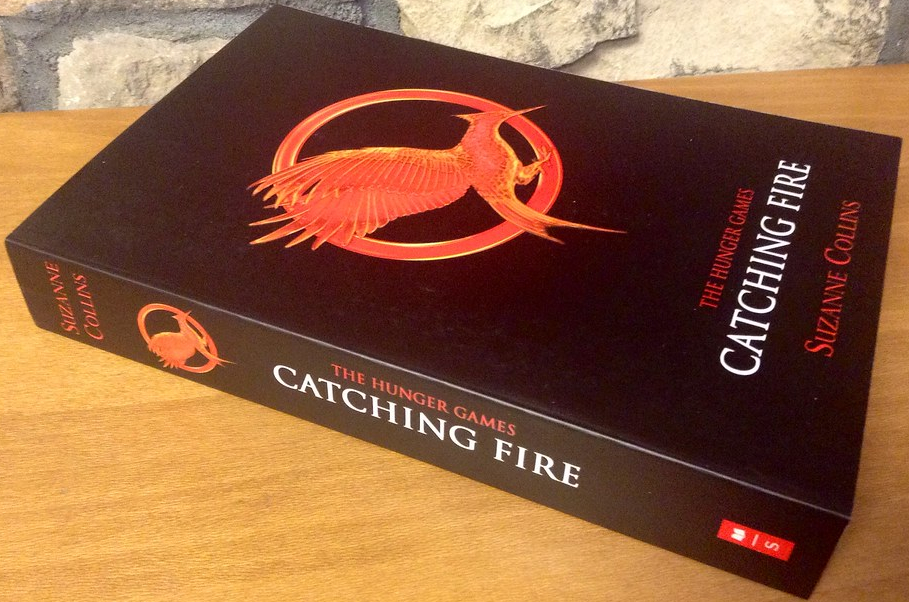 Catching Fire was written by Suzanne Collins.  It was delivered to bookshelves in September, 2009.  Over nineteen million copies have been sold in the United States today.  The plot follows Katniss Everdeen and her adventures after winning The Hunger Games.  There are familiar faces and new villains.  The Catching Fire film was released in 2013.

Katniss hunts some food for her friend Gale and his family.  She stops at the black market in District 12 and heads back to her new home in the Victor’s Village.  Peeta and Haymitch are the only other residents of the village. Victor is nowhere to be found.  Haymitch is drunk.  President Snow is waiting for Katniss.

Big Snow drops a blizzard on her and says that her threat of mutual suicide with Peeta has caused a rift in the nation.  The inhabitants of the Capitol believed her antics, but the proletariat in the numbered Districts viewed it as an act of defiance.  Snow can’t have a revolt and tells Katniss that she needs to convince the people that she loves Peeta during the victory tour.  If she does not, Gale’s life is in jeopardy.  Katniss shivers and acknowledges the threat.  She takes a bath and the makeup crew arrives.  Everyone else cleans up and the trio heads to the train station.  She talks to Haymitch about her conversation with the President.  He tells Kat that she must perpetuate the love story and marry Peeta to keep the peace.

The train unloads at District 11.  It is the home of Rue from the last book.  Speeches are made and the crowd erupts against protocol.  An old guy whistles.  The Capitol disapproves and grandpa is shot.  Peeta and Katniss head to safety and more guns go bang, bang.  The tour continues and Katniss can feel the unrest in the districts.  Peeta proposes to her during a televised interview at the Capitol.  Snow congratulates them.  The avalanche is prevented, but Katniss is still on thin ice.

The mockingjay symbol continues to appear at the Capitol feast.  Some dancing takes place and the good guys take the train back to District 12.  The engine screeches to a halt and they go to the mayor’s home.  Katniss passes a television and learns that a riot has started in District 8.  She goes to the woods and meets Gale.  They talk about President Snow and the current uprising.  Gale wants to fight too.  She says it would put everyone at risk.  They depart and she runs into Peeta.  The pseudo couple agree to run away.  They walk to the district’s main square.  Gale is being punished for hunting.  Haymitch placates the violence.

Gale’s wounds are treated and Katniss kisses him.  Time passes and the plot thickens.  A storm comes and the days tick by.  A food shortage plagues District 12.  The residents are out of work.  Tensions rise and Katniss hikes in the woods.  She runs into a woman with a gun.  The woman drops it and shows the protagonist a cracker with a mockingjay symbol.  Katniss shrugs and learns it is a symbol of the rebellion.  A girl named Bonnie appears and Twill introduces herself.  They ran away from District 8 after the uprising was suppressed and are headed to the abandoned District 13.

Katniss injures herself returning home.  The weeks pass by and she heals up.  A photoshoot happens without any issues.  She takes a walk with Haymitch and they discuss the revolution.  He says half the districts have attempted a revolt and if their own was to do the same, everyone needs to take part.  If not, everyone will die.  The sun sets and Katniss watches a broadcast about her wedding dress.  Snow reveals that the upcoming 75th Hunger Games will feature tributes selected from the winners of each district.  Katniss is the only available female from twelve and will be forced to compete.  Peeta volunteers as the male.  Haymitch drinks.  The plot is officially catching fire.

The three victors prepare and watch videos of the previous games.  They board a train and head to their fate.  Katniss and Peeta continue to develop tactics and review the event that Haymitch won.  A ceremony happens at the Capitol and Katniss is stunning as always.  She drifts off to sleep and has nightmares.  More training begins and alliances are formed.  The standard interview process concludes and the games begin.  Peeta and Katniss team up with Finnick and Mags.

The allies search for water in the dense vegetation of the arena.  Katniss spots a weakness in the border’s force field.  Peeta faceplants into it and his heart stops.  Finnick brings him back to life.  Water is still unavailable and they make a camp.  A rodent is slaughtered for dinner.  Morning appears and they are able to hydrate.  A storm overcomes the arena and a fog obscures everyone’s vision.  The mist slaps their skin and toxins soak in.  Peeta and Katniss bathe in salt water to remove the poison.  Monkeys watch the couple and later attack.  A woman from District 6 steps in to save Peeta.  Mags does not survive.  The primates retreat.  A package from Haymitch arrives with ointment for their wounds.

Betee and Wiress from District 3 and Johana from seven join the good guys.  Wiress explains that the arena is the shape of a clock and traps are triggered in each section for an hour.  Someone from District 1 slays Wiress.  Johana and Katniss retaliate and kill the attackers.  Finnick protects Peeta and everyone flees.  Some jabberjays torment the alliance by mimicking the speech of their loved ones.  Mental and physical fatigue sets in.

A new day breaks and Katniss and Peeta discuss splitting from the group.  Beetee implements his plan to electrocute the tributes from District 2 with a lightening trap.  Pandemonium erupts and Katniss ends up ushering the electricity into the weak spot of the arena’s force field with her bow and arrow.  A vivid light fills everything and the force field breaks.  Katniss is knocked unconscious.

Explosions occur and a hovercraft picks up Katniss.  She wakes up unaware of her surroundings.  Haymitch and Finnick tell her that they had planned to break out of the arena from the beginning.  Peeta and herself were left out to protect the integrity of the scheme.  The craft soars towards District 13.  Johanna and Peeta are captured by the Capitol.  A full-scale rebellion afflicts the world and District 12 is destroyed.  Catching Fire ends on a cliffhanger.