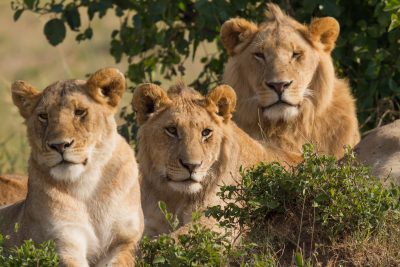 Lions are the Kings of the Jungle.  The word lion is a derivative of the Ancient Greek word leon and the Latin word leo.  The Hebrew word lavi is related too.  Carl Linnaeus coined the lion’s scientific name in 1758 in his book System Naturae.  They inhabit savannas and grasslands around Africa and are a social species.  Several lions group together in harmonic prides.  They are commonplace in literature and cinema.  All of this coverage has infused a strong sense of pride within their rank in the Animal Kingdom.

Rest is number one Maslow’s hierarchy of needs for a lion.  The large cat could not care less about water, warmth and food.  Sleep and leisure are far more important.  They are out of commission for twenty hours a day.  Two hours are dedicated to walking and an hour is allocated for eating.  The remaining sixty minutes is spent combing their fur and gorgeous manes.  They may be hypercarnivores (diet consists of 70% meat), but fashion is valued.

Their prey includes the plains zebra, African buffalo, giraffe, gemsbok (oryx), blue wildebeest and the common warthog.  The wide array of targets has made them the keystone and apex predators of the region.  Sometimes lions kill other predators (cheetah, spotted hyena, leopard).  They rarely eat them.  A lone cat can tackle wildebeests and zebras with ease.  Larger prey (giraffe and buffalo) is more difficult and incorporates risk.  Little lions learn to stalk after three months.  They join the hunt when they turn one.  The adolescents are effective after their second year.

Lionesses exhibit extreme coordination when they hunt.  The alpha will close the gap on a target by working from the permitter.  They can meet any escaped prey by launching from the middle of the group and leading it back to its slaughter.  Males prefer to kill alone and stray away from group hunts.  That’s girl time anyways and they are poor at small talk.

Female lions need to eat eleven pounds of meat per day to stay fit.  Males need to digest fifteen.  They consume over sixty pounds per kill and will rest (of course) if they cannot finish in one sitting.  A couple males stand guard and everyone returns for dessert.  Hyenas and vultures are the usual suspects that need to be thwarted.  However, lions love food and will scavenge on carrion themselves.  Apex predator privilege (APP) reverses the roles and they will profit off of a hyena’s kill.

The lion is part of the Panthera genus.  Fossil records place its origin in Central Asia around five to ten million years ago.  It split into factions and evolution spawned other species, including the jaguar and leopard.  Cave lions went extinct by the end of the Last Glacial Period (LGP, 115,000 – 11,700 years ago) and the modern lion came into prominence during the Chibanian (Middle Pleistocene).  The prehistoric lions and current subspecies are listed below.

Lions have small hearts relative to their body weight.  This compromises their stamina.  They cannot move at top speed for long.  Night cover and stalking tactics compensate for their deficiency.  When they close the distance, they burst forward.  Their lunge is fast and concluded with a powerful leap that subdues their victim.  They bite into the animal’s hind quarters and lacerate the throat with their powerful jaws.  Afterwards, they…rest.

Muscles ripple throughout a lion’s chest.  Their head is rounded and sits on a stout neck.  The fur coloring is varied and is made up of a robust palate of dark brown, silver, yellow and red.  Cubs have dark spots that fade when they mature.  The famous mane is found on males and is a brownish yellow hue.  Lion tails have a dark coloring at the end.  Lion tales are private and recited when they are resting.  Females weigh between 240 and 300 pounds.  The males are larger and can reach close to five hundred pounds, but average in the mid four hundred(s).

Lions are polyestrous and mate at any time during the year.  A lioness can have multiple partners.  She will birth one to four cubs in each liter.  They are born blind and away from the pride.  Their eyes open a week later.  The mom will protect and hunt for her babies.  Relocation is frequent.  The purpose is to prevent the buildup of their scent from attracting predators.  They rejoin the pride after two months.  The cubs will nurse from any able mother when they are reacclimated to the social circle.  Eighty percent will die before the age of two.  The survivors mature in three to four years.

An average pride contains around fifteen lions.  The largest pride recorded had thirty members.  The maximum number of males is four.  They patrol the fringes of the pride area (territory).  Everyone maintains the same role in the community.  Intruders are not welcomed and their privacy is defended if anyone dares to enter.  Male lion outsiders may attempt to claim one of the four coveted spots.  Challenges are part of the responsibility of having a luscious mane.