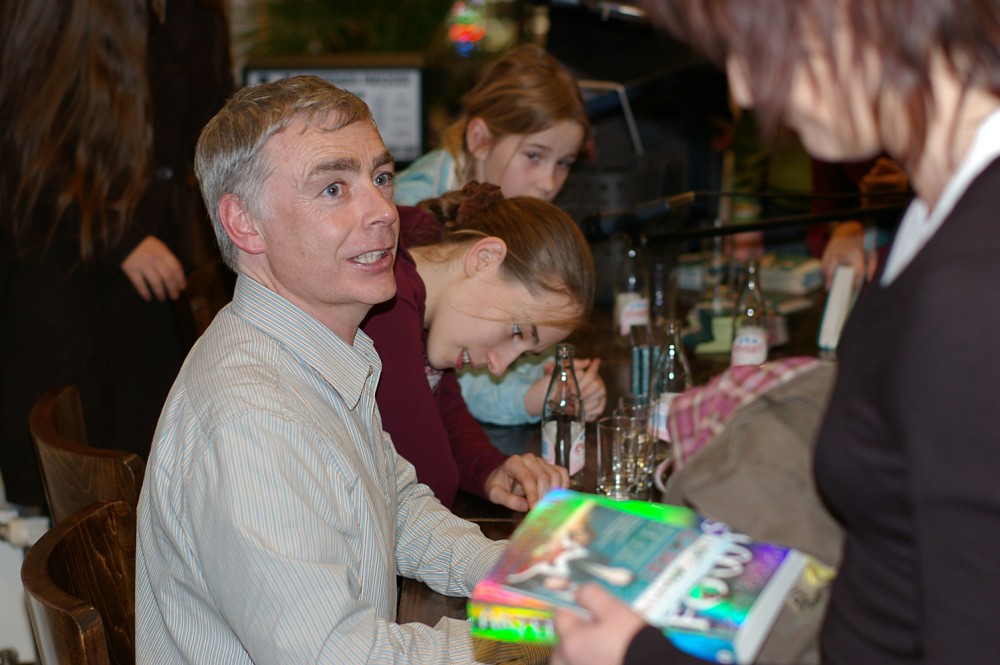 Eoin Colfer was born on May 14, 1965 in Wexford, Ireland.  Mama Colfer was a drama teacher and Papa C was a teacher and historian.  He has four brothers and writes books for children.  Four Brothers (2005) is an action film directed by John Singleton.  Mark Wahlberg, André Benjamin, Garret Hedlund and Tyrese Gibson are the brothers and the stars.  Eoin Colfer was not involved with the screenplay.  Paul Lovett and David Elliot own the credit.

Literature captivated young Eoin in his childhood.  He explored his passion and started writing in elementary school.  His first major work was a class play about Viking Gods.  Time passed and he attended Dublin University.  Colfer worked as a primary school teacher in Wexford after graduation.  He married in 1991.  The newlyweds spent four years working in Italy, Saudi Arabia and Tunisia between 1992 and 1996.  His first novel, Benny and Omar, was inspired from his time in Tunisia and published by Puffin Books in 1998.  It has since been translated into several languages.

Benny and Babe was the sequel and published a year later.  Eoin Colfer’s first writing efforts were a success.  He contributed a few stories to a compilation series that targeted young readers over the next couple of years.  In 2001, he arrived in the mainstream with his young adult fantasy blockbuster Artemis Fowl.  Critical reception was positive and it won the Young Reader’s Choice Award in 2004.  Seven additional books followed and a three book spin-off series came after.

Artemis Fowl tells the story of a twelve-year-old savant named Artemis Fowl II.  He kidnaps Captain Holly Short with his bodyguard Butler and holds her for ransom.  Holly is an elf and works for the Lower Elements Police Reconnaissance force.  The stakes are high and Artemis demands one ton of gold for her release.  His motive is to restore his family’s fortune.

Artemis is casted as a villain and an enemy of the people.  As the series unveils, he becomes an anti-hero.  His character and motives lighten.  His moral compass unclouds with time.  The second novel covers the rescue of Artemis’s father, Artemis Fowl I, from the mafia.  It is called Artemis Fowl and the Arctic Incident (2002).  Artemis Fowl and the Eternity Code (2003) details the theft and return of the C Cube.  Book four is Artemis Fowl and the Opal Deception (2005).  The story ties back into the second one.

The hit-maker Eoin Colfer released the next piece of the adventure in 2006.  Artemis Fowl and the Lost Colony explores the demon island and is filled with elements of high fantasy.  Time passed and Artemis Fowl and the Time Paradox appeared in 2008.  Temporal paradox concepts and time travel are spun throughout.  Two more years close and E.C. dropped Artemis Fowl and the Atlantis Complex (2010) on the masses.  A new alter ego and complex story development are embedded in the pages.

End of an Era and other Works

The final chapter of the main arc, Artemis Fowl and the Last Guardian, brought the opus to a close in 2012.  A spin-off sequel called The Fowl Twins landed in 2019.  The story surrounds Artemis’s younger twin brothers Beckett and Myles Fowl.  Part two (The Fowl Twins Deny All Charges) arrived the following year.  A third novel is due in bookstores and wherever consumers purchase electronic literature at the end of October, 2021.  The name is The Fowl Twins Get What They Deserve.  Myles and Beckett will probably get what they deserve.  Myles asks Beckett what is coming to him and he says, “The world Myles…and everything in it.”

The movie adaptation of Artemis Fowl was announced in 2001.  Miramax Films purchased the rights and the screenplay was finished in 2003.  The picture stayed in development and production limbo until 2011.  Walt Disney Studios Motion Pictures revitalized the project in 2013.  Kenneth Branagh was chosen to direct.  The release was set for the summer of 2019 and delayed until the following spring.  The film was shown to audiences on Disney+ on June 12, 2020.

Eoin Colfer wrote some more books called the Wish List and The Supernaturalist (2004). He penned the final episode of the Hitchhiker’s Guide to the Galaxy (And Another Thing…(2009)) series and collaborated on a picture book titled Imaginary Fred (2015).  Big Fred won many awards.  He authored two adult crime novels Plugged and Screwed.  They follow the ex-Irish Army sergeant Daniel McEvoy.  The series stalled out and was disbanded in 2013.

Over half of Eion Colfer’s novels have landed on the New York Times Bestsellers list.  Artemis Fowl has been translated into forty languages and has sold over twenty-five million copies.  Colfer lives in Ireland with his bride and two children.

“Well, I don’t like the first bit and I don’t know the last bit. So I’m really hoping the middle bit is exceptional.”