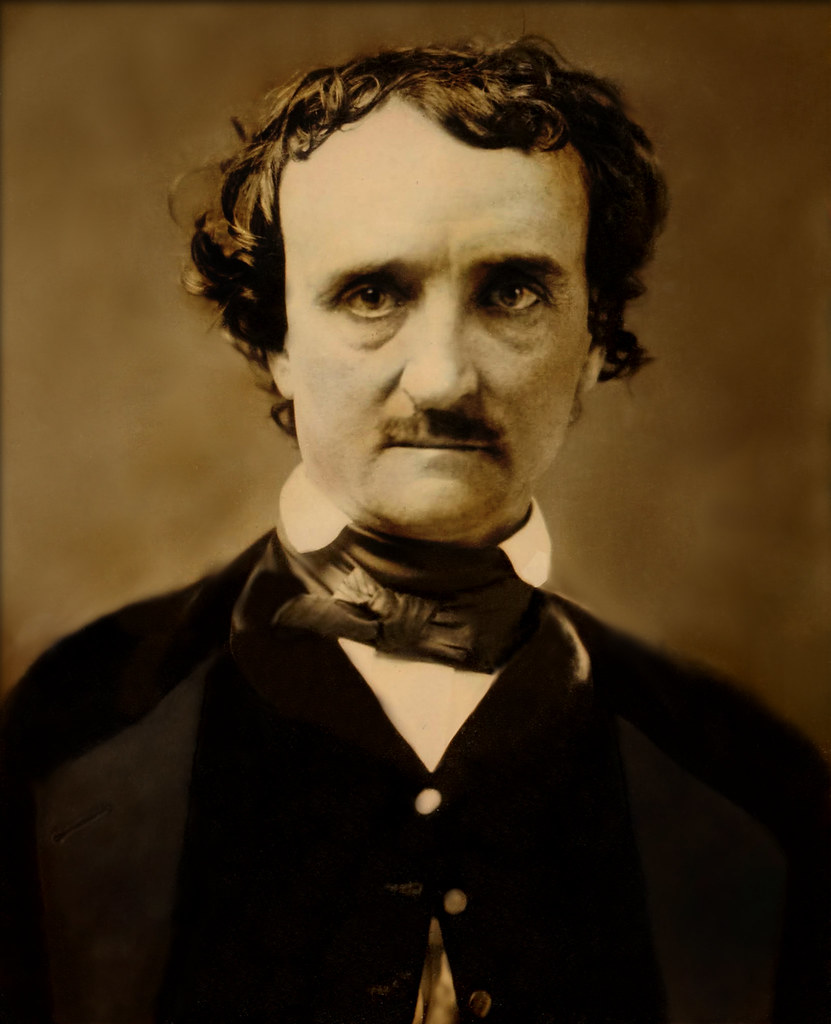 Edgar Allan Poe was an American poet, writer and literary critic.  He was born on January 19, 1809 in Boston, Massachusetts.  His parents were both actors.  Mama Poe was Elizabeth Arnold and from England.  Papa P was David Poe Jr.  Big Dave was born in Maryland.  Edgar Allan Poe had two siblings.  His older brother was William Henry Leonard Poe and his younger sister was Rosalie Poe.

Edgar was named after a character found in William Shakespeare’s King.  His parents were performing the play when little E was born in 1809.  His immediate childhood was traumatic after his father left the family in 1810.  His mother died from tuberculosis a year later.  A wealthy merchant from Virginia took him into his home after the death.  His name was John Allan.  The foster family acted as his guardians, but never adopted him.

The Allan household sailed to the UK in 1815.  Poe went to grammar school in Scotland.  He returned to the family in London in 1816.  Edgar transitioned to a boarding school in Chelsea until mid 1817.  He transferred to the Reverend John Bransby’s Manor House School in North London.  The gang moved back to Virginia in 1820.

John Allan received a large inheritance and bought an estate in 1825.  Poe enrolled into the University of Virginia in 1826.  His focus was modern and ancient languages.  The university was new and had a strict set of rules against various levels of debauchery.  The college kids ignored them.  The dropout rate was high.  Edgar Allan Poe fell in love with gambling and accumulated a massive debt.  He left Virginia after a year and moved to Boston in 1827.  He adopted the pseudonym Henri Le Rennet.

Edgar worked various jobs, but was unable to support himself.  He enlisted in the United States Army under the name Edgar A. Perry.  He claimed he was twenty-two.  He was eighteen.  He did his duty and published a forty-page compilation of poems titled Tamerlane and Other Poems (1827).  Fifty copies were printed and it went unnoticed.  His regiment moved to South Carolina and he was promoted.

Two years passed and he was promoted to Sergeant Major for Artillery.  It was the highest rank a non-commissioned office could obtain.  He revealed his true identity to his commanding officer and sought an early discharge.  The Lieutenant agreed under the condition that Poe reconciled with his foster father.  Time passed and the terms were met.  Edgar was released on April 15, 1829 after securing his replacement.

He kept writing poetry and received some positive critical feedback.  Big E entered West Point as a cadet in the Summer of 1830.  He grew tired of the routine and was purposely court-martialed in 1831.  He moved to New York soon after.  His third book of poems, called Poems was published.  His brother died from alcoholism later that year.  The trauma propelled him to focus on writing full time.  He became one of the first Americans to support themselves on words alone.

Edgar Allan Poe submitted his work to various magazines and publications.  His short story MS. Found in a Bottle (1833) won a prize in 1833.  He landed an assistant editor position at the Southern Literary Messenger in Richmond.  Two weeks passed and he was fired for drunkenness on the job.  He reunited with the owner and was rehired.  It was his home until 1837.  Poe was prolific and his output exploded.  His novel The Narrative of Arthur Gordon Pym of Nantucket was published in 1838.

More time dripped by and more poems materialized.  His substance abuse increased.  His sanity decreased.  He was close to his younger cousin and in a relationship.  She contracted tuberculosis and the illness exacerbated his drinking.  His breakthrough was in 1845 with his poem The Raven.  He became a household home by nightfall.  He moved to New York in 1846.  His cousin passed in 1847.  Edgar was unstable.

Poe was delirious and wandering the streets of Baltimore on October 3, 1849.  He was picked up and taken to the Washington Medical College.  He was incoherent and wearing someone else’s clothes.  He died on the morning of October 7, 1849 at the age of forty years old.  The cause of death was labeled as cerebral inflammation from alcoholism.  Edgar Allan Poe’s last words were Lord help my poor soul.  His work endures.

“I became insane, with long intervals of horrible sanity.”