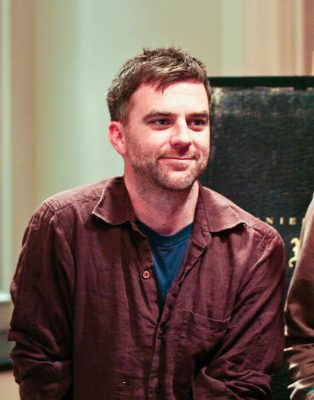 Paul Thomas Anderson is a director and was born in Los Angeles, California on June 26th, 1970.  His parents are named Ernie and Edwina Anderson.  He has eight siblings.  Ernie was a television and radio personality.  He hosted late night horror films as Ghoulardi.  The ghoul portion of the moniker could have lurid connotations.  The jury is hung and the verdict suspended.  Time will tell.  Paul grew up in the San Fernando Valley.  Several of his movies are set there.  He was close with his father, but not his mother.  His father fostered his artistic talents and encouraged his career in film.

Anderson was enrolled in several schools during his youth.  He attended Santa Monica College and finished two semesters at Emerson College where he majored in English.  David Foster Wallace was one of his professors.  DFW, not to be confused with the international airport, wrote Infinite Jest.  Paul Thomas Anderson made the short film Cigarettes & Coffee in 1993.  It was screened during the Sundance Festival in the same year.  The picture expanded into a feature-length movie that showed at the same festival in 1994.  The director Michael Caton-Jones recognized Anderson’s talent and was as an early mentor.  He directed Memphis Belle.

Paul landed a studio deal to direct his first full-length film after Sundance.  The picture was titled Sydney and retitled to Hard Eight.  The studio made edits, but Anderson sent the original version to the 1996 Cannes Film Festival.  It premiered in the Un Certain Regard section and stared John C. Reilly, Philip Baker Hall and Gwyneth Paltrow.  They provided $200,000 to polish Paul’s version.  The final cut was well-received and propelled Anderson’s career.

Phillip Seymour Hoffman had a part in Hard Eight.  He had one in Paul Thomas Anderson’s sophomore film,  Boogie Nights too.  Anderson completed the script in 1995.  It was released in the fall of 1997 and starred Mark Wahlberg, Julianne Moore and Burt Reynolds.  It landed three nominations at the 70th Academy Awards (Best Original Screenplay, Best Supporting Actor and Best Supporting Actress).  The picture rejuvenated Reynolds career, but he declined to star in Anderson’s next film (Magnolia).

The success hangover arrived and Paul Thomas Anderson decided to do what all great directors do.  He called up Adam Sandler and wrote a script for him.  The result was the ninety-minute dramatic comedy Punch-Drunk Love.  The film thrusted Sandler into a serious role and showcased his acting prowess.  It released in 2002 and Paul won the Best Director Award at the Cannes Film Festival that year.  Punch-Drunk Love was nominated for the Palme d’Or.

Anderson was pensive.  What does a director do after directing Sandler?  Do they relax?  Do they retire?  No, they push further and link up with Daniel Day-Lewis and twenty-five million dollars conflated with the content of the novel Oil! by Upton Sinclair.  In 2007, this amalgam materialized into There Will Be Blood.  Lewis played a silver miner exploiting the oil boom.  The picture struck oil and was nominated for eight Academy Awards (Best Film Editing, Best Sound Editing, Best Cinematography, Best Art Direction, Best Actor, Best Director, Best Picture and Best Adapted Screenplay).  Daniel Day-Lewis won Best Actor and the film claimed Best Cinematography (Robert Elswit).  Paul Thomas Anderson lost all three of his nominations to the Cohen Brother’s No Country for Old Men, which was adapted from Cormac McCarthy’s novel.

Paul was now a master director.  His next project was unveiled in the fall of 2012.  It was titled…The Master and gained international acclaim.  Joaquin Phoenix teamed up with Phillip Seymour Hoffman and Amy Adams inside a World War II-Era backdrop.  Phoenix portrayed a drunken veteran that gets engulfed in Hoffman’s (the master) religious movement “The Cause”.  The movie was nominated for three Oscars at the 85th Academy Awards (Best Supporting Actor and Actress and Best Leading Actor).  It did not win any.

Paul Thomas Anderson was in a five-year relationship with Fiona Apple before settling down with actress Maya Rudolph in late 2001.  They have four children and live in the San Fernando Valley. Paul attend film school for two days before dropping out.  He preferred an autodidactic approach and watched the work of directors he liked.  His influences include Robert Altman, Stanley Kubrick, Martin Scorsese and Orson Welles.  His body of work is venerated by his peers and a benchmark for future directors.

“Screenwriting is like ironing. You move forward a little bit and go back and smooth things out.”