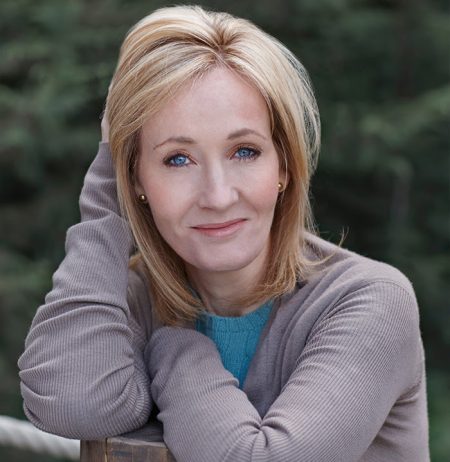 Joanne Rowling was born on July 31, 1965 near London in Yate, Gloucestershire.  She is famous for being the 2007 Time Person of the Year runner-up to Vladimir Putin.  Most know her by her pen name J.K. Rowling.  Why does she need a pen name?  Well, it turns out she is notorious for writing too and is responsible for the Harry Potter series.  Despite popular belief, the stories follow the life of a child wizard and not the trials of a struggling pottery artist with excessive facial hair.

The K in J.K. Rowling was selected by Joanne because she didn’t have a middle name.  A “K” in baseball is a strikeout when the batter selects not to swing.  A backwards “K” (ꓘ) denotes the batter swung.  Moving forward, the reason for the pen name was to mask the gender of the author.  The original target audience for Harry Potter was adolescent boys who were thought to be less inclined to select a book written by a woman.  That turned out to be irrelevant and Harry Potter sold quite well.

The full name of the book with Harry in it is Harry Potter and the Philosopher’s Stone.  It was renamed to Harry Potter and the Sorcerer’s Stone in the United States.  I guess several potters majored in philosophy, so the sorcerer change reinforced the magic undertones of the plot.  J.K. Rowling majored in Classics and French at the University of Exeter.  Harry attended the Hogwarts School of Witchcraft and Wizardry and studied magic.

J.K. Rowling published more books about Harry for a grand total of seven, which is the title of a David Fincher film, but stylized as “Se7en”.  Eight accomplished films were made too.  If you turn “8” sideways it forms the symbol for infinity (∞).  I know what you are thinking, numbers are exciting, but there are seven books and eight films.  Numbers are much less exciting when they don’t make sense.  Do not worry, there is a solution. The seventh book was split into two films.  This could have been done for profit (not prophet), the story was too long or the most plausible reason, magic.  Regardless, J.K. Rowling’s work is entertaining and enjoyed across the globe in both print and cinema.

The acclaim of her work earned J.K. Rowling a lot of money and honorary degrees.  The degrees are from Harvard University, Edinburgh Napier University,  University of Edinburgh,  University of Aberdeen, University of Exeter and St Andrews University.  She is estimated to have a billion (thousand million) dollars and has donated a significant portion to various charities.  J.K. Rowling founded the Volant Charitable Trust.  The goal of the trust is to fix social deprivation and support children and other causes.

Her success spawned several companion stories that take place in Harry’s fictional universe and a few adult novels.  Here is a list of them.

Harry Potter produced criticism too.  The famous literary critic Harold Bloom detailed his opinion in an article titled Dumbing down American readers.  His main issue was the repetitive metaphors sprinkled throughout the adventure.  The stale diction weighed down the experience for him.  Harold was irate when a character went for a walk and J.K. Rowling used the term, “stretched his legs”.  He marked down the usage and gave up after his tally exceeded a few dozen.

He makes a few more points and mentions that he read a positive review from Stephen King that claimed that if kids are reading Harry Potter today, they will go on to read his novels when they mature.  Harold agrees, but was disappointed.  If Harry Potter encouraged them to pick up a book, it was the wrong book and the stylistic choices in Harry Potter and the Sorcerer’s Stone would discourage children from exploring literary classics, such as Alice and the Jungle book.

The critique is scathing and highlights an example of the inverse and more common praise that J.K. Rowling received.  The quality of the diction in the adventures of Harry Potter can be debated, but enticing the masses to explore an antiquated form of entertainment cannot.  Picking up a book is a good thing.  Picking a fight is not, especially if you pick one with a pugilist.

J.K. Rowling was married to Jorge Arantes, a Portuguese journalist.  She is now married to Dr. Neil Murray.  She has three children.  Their names are Jessica, David and Mackenzie.  Harry potter is married to Ginny Weasley (a wizard) and has three fictional children named James, Albus and Lily.  Perhaps some of the author’s personal life made it into the books.

Her influences include C.S. Lewis and Jane Austen, not Austin.  Austin is a city in Texas and home of the University of Texas at Austin, which was established on September 15, 1883.  Their mascot is the Longhorns.  Mr. Lewis has written several books and is one of the few children’s authors with a similar sphere of influence as J.K. Rowling.  He is the founder of the beloved The Chronicles of Narnia series (The Lion, the Witch and the Wardrobe, Prince Caspian, The Voyage of the Dawn Treader, The Silver Chair, The Horse and His Boy, The Magician’s Nephew, The Last Battle).

J.K. Rowling’s writing journey started with modest beginnings and reached unprecedented heights.  She has left a generational high-water mark on society that will not be receding anytime soon.