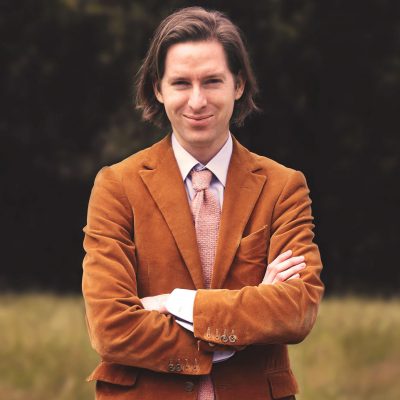 Wesley (Wes) Anderson was born in Houston, Texas on May 1st 1969 during the summer of love.  His middle name is Wales and he is known for directing and writing eccentric films.  They have a unique narrative and visual style and have been well received by critics and audiences around the globe.  He shares a last name with fellow award-winning director Paul Thomas Anderson.  The two Anderson’s have extracted some of the most memorable performances from several top actors.

Melver and Texas Ann Anderson are Wes’s parents.  They divorced when he was eight years old and had three boys.  Wes is the middle child and his older brother is named Mel.  His little brother Eric is an artist and writer.  Some of his paintings have appeared in his brother’s films.  Wes went to high school at St. John’s School (Houston, TX) and graduated in 1987.  He attended college at the University of Texas (Austin, TX).  His degree was in philosophy and was completed in 1990.

Anderson made numerous silent films on a Super 8 camera when he was a child.  They starred his friends and brothers.  His first film Bottle Rocket was released in 1996.  It featured his friend he met at University and his friend’s brother.  His name was Owen Wilson and the brother was Luke.  There were a lot of brothers and friends in the beginning.  The movie was based on Wes’s short film of the same name about small time criminals in Texas.  It was a commercial failure, but a critical success.

Rushmore (1998) was Wes Anderson’s sophomore film.  It starred Bill Murray, Jason Schwartzman, Brian Cox and Olivia Williams.  It helped rejuvenate Bill Murray’s career and ignited a professional relationship that continues to this day.  The budget was close to ten million dollars and it made almost twenty million at the box office.  The reviews were positive and the film won accolades at the 1999 Independent Spirit Awards (Best Supporting Male and Best Director).  The Library of Congress added Rushmore to the National Film Registry in 2016.

Wes Anderson cemented himself as a premier director after the turn of the century.  The Royal Tenenbaums debuted in 2001 and was filled with a talented cast (Anjelica Huston, Bill Murray, Gwyneth Paltrow, Ben Stiller, Owen Wilson, Luke Wilson, Danny Glover and Gene Hackman).  The budget was $21 million and it grossed over seventy ($50 million domestic).  The critics loved it and The Royal Tenenbaums received an Academy Award nomination for Best Original Screenplay.

The Life Aquatic with Steve Zissou (2004) was met with mixed levels of success.  The critical reception was weak and it struggled to meet the public’s expectation of Anderson after The Royal Tenenbaums.  The Steve Zissou cast (Owen Wilson, Bill Murray, Cate Blanchett, Willem Dafoe, Jeff Goldblum and Anjelica Huston) was strong and followed a peculiar oceanographer’s quest for revenge on the fictional jaguar shark.  The movie failed to turn a profit against its fifty-million-dollar budget and lost $15 million.  Despite its early detractors, the film is now considered a cult classic and seen in a more favorable light by critics today.

Three neurotic and distant brothers bonded during a train ride throughout India in The Darjeeling Limited (2007).  Roman Coppola and Jason Schwartzman wrote the script with Wes Anderson.  The brothers were played by Adrien Brody, Owen Wilson and Schwartzman.  The pundits had mixed feelings, but the majority of reviews were positive.  The film grossed $35 million and had a $17.5 million budget.  The movie is dedicated to the filmmaker Satyajit Ray.

Moonrise Kingdom premiered at the 2012 Cannes Film Festival.  The plot revolves around two children who run away from home in a small New England town.  Jared Gilman and Kara Hayward were cast as the kids and the adults included several familiar names (Frances McDormand, Bill Murray, Edward Norton, Tilda Swinton and Bruce Willis).  Roman Coppola and Wes collaborated on the script.  They failed to win their Academy Award Nomination for Best Original Screenplay, but the film was a box office hit (close to seventy million dollars compared to the $16 million budget).

Some of Anderson’s influences include Woody Allen, Roman Polanski, Stanley Kubrick, John Huston, Pedro Almodóvar and Louis Malle.  His peers and critics consider him an auteur (filmmaker with full creative control and a unique and identifiable style).  He has one daughter (Freya) with the Lebanese voice actress and writer Juman Malouf.  They have been in a relationship since 2010 and are unmarried.  They live in Paris.

I don’t think any of us are normal people.