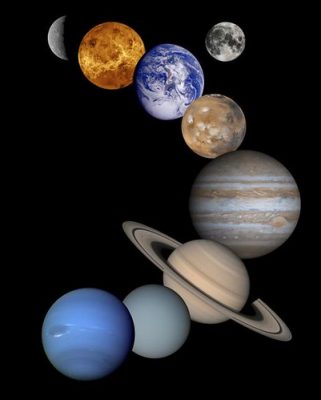 The Solar System refers to the Sun and all of the objects that orbit around it.  Humanity believed that the Earth was the center of the universe during the Renaissance.  Nicolaus Copernicus (1473 – 1543) was the first to theorize a heliocentric system where the Sun was in the middle.  Galileo Galilei (1564 – 1642) discovered that Jupiter had four orbiting satellites.  Christiaan Huygens (1629 – 1695) exposed Saturn’s moon Titan and the rings of Saturn.  Edmond Halley (1656 -1742) recorded a reoccurring comet that appeared every seventy-five years or so.  It is known as Halley’s Comet or 1P/Halley, after the legend himself.  The comet was the first piece of evidence that planets were not the only objects spinning around the Sun.  Following the discovery, the term Solar System appeared in the English Language (1704).

Four and a half billion years ago the Solar System formed when a molecular cloud (stellar nursery) collapsed.  The event occurred light-years away and birthed numerous stars.  The mass collected at the center and flattened into a protoplanetary disc (gas and dust surrounding a baby star) with a dense and brilliant protostar in the heart.  Lots of science occurred and the planets formed through accretion (accumulation of particles through gravity).  There were hundreds of planets in the beginning, but most merged or were destroyed.

Silicates and metals were all that remained close to the Sun.  It turns out that star is quite hot.  The metals and silicates solidified and formed the rocky planets Mars, Earth, Venus and Mercury.  Their elements were limited and stunted the planet’s growth.  The big boys formed past the frost line (between the orbits of Jupiter and Mars) where arctic compounds can remain solid.  There was a plethora of ice compared to the metals.  This allowed Neptune, Uranus, Saturn and Jupiter to develop into giant planets by capturing helium and hydrogen into their atmospheres.  The residual debris assembled and formed Oort cloud, Kuiper belt and the asteroid belt.

Thermonuclear fusion transpired within the protostar after fifty million years.  The density and pressure of the hydrogen filled center reacted until it reached hydrostatic equilibrium (the force of gravity is balanced with the thermal pressure).  The ordeal transitioned the Sun from a protostar into a main-sequence star.  The phase lasted a brief ten billion years.  Solar wind swirled into space and created the heliosphere (boundary and outer reaches of the Solar System).  This removed the lingering dust and gas from the system and completed the planet forming phase.

The Sun is slowly converting the hydrogen in its core into helium.  The process will end in about five billion years.  This will end the main-sequence stage and emit a massive output of energy.  It will grow over 250 times in size and morph into a red giant (giant low-mass star).  The surface of the Sun will cool, vaporize Mercury and Earth will no longer be inhabitable.  In time it will turn into a white dwarf (a dying star with enormous density) and the outer layers will dissipate into space.  The Sun will say “goodbye” and leave a planetary nebula (glowing shell of ionized gas, PN or PNe).

The Solar System is made up of a vacuum called the interplanetary medium.  The Sun radiates light and solar wind (charged particles of plasma).  The wind’s stream of particles emits outwards at 1.5 million kmph that course through the interplanetary medium.  The magnetic field of Earth protects its atmosphere from the solar winds.  Mars and Venus do not have a field and are slowing shedding their atmospheres as a result.  Large amounts of material from the Sun are blown into Earth’s magnetic field and funnel near its poles.  The interaction creates aurorae.

There are four inner planets and an asteroid belt in the Solar System.  Mercury is the smallest and closet to the Sun.  It sits at a distance of 0.4 AU (astronomical unit, 93 million miles) and has no natural satellites.  The surface has ridges and impact craters.  The core is made up of iron and the atmosphere is negligible.  Venus is about the size of Earth and is located 0.7 AU from the Sun.  There is internal, but not external geological activity and a dense atmosphere.  It has no natural satellites.  It has the hottest surface temperatures in the Solar System that reach over 750 degrees Fahrenheit.

Earth is exactly 1 AU from the Sun and the biggest of the inner planets.  It is the only place where life and surface geological activity is occurring.  A unique liquid hydrosphere (combined mass of water) encompasses it.  The presence of lifeforms has induced a 21% free oxygen-filled atmosphere.  It has one natural satellite known as the Moon.  It is not made of cheese.  Mars is the fourth and final inner planet and is 1.5 AU away.  The atmosphere is made of carbon dioxide.  Volcanoes and rift valleys infest the surface.  Geological activity on Mars occurred two million years ago.  Iron oxide in the soil gives the planet its red color.  Two small natural satellites orbit it (Phobos and Deimos).  Scientists believe they are large debris or captured asteroids.

There are four giant outer planets.  Jupiter is the biggest and the next furthest at 5.2 AU from the Sun.  It is two and half times the mass of all of the other planets combined.  Big “Jupe” is made up of helium and hydrogen.  Internal heat creates the Great Red Spot.  There are 79 known satellites and the largest (Ganymede) is bigger than Mercury.  Saturn is 9.5 AU away and is surrounded with a ring system.  The rings are built with rock and ice particles.  The planet is less dense than water and has 82 identified satellites.  They are made up of ice.  Two of them display signs of geological activity (Enceladus and Titan).  Titan has its own atmosphere.

Uranus is 19.2 AU away and the lightest outer planet.  It has the coldest core and radiates little to no heat.  There are 27 known satellites in orbit.  It orbits the Sun on its side.  Neptune is the furthest at 30.1 AU away and has 14 satellites.  The biggest is called Triton and it is geologically active (liquid nitrogen filled geysers).  There are various minor planets that orbit Neptune.  They are called Neptune trojans.

The Solar System is located in the Milky Way (not the candy bar)  in the Orion Arm.  There are eight unique planets.  There were nine, but Pluto no longer meets the modern definition of the term planet.  There are three criteria.  The first is it must orbit around the Sun.  Pluto does that.  The second is to have enough mass to create a hydrostatic equilibrium and round shape.  Pluto clears that too.  The final requirement is to have “cleared the neighborhood” around its orbit.  Baby “P” has failed to clear that.  This means that it is necessary to be the gravitational dominant mass and consume or eject all other large objects in the vicinity.  Pluto shares an orbital neighborhood with other large objects in the Kuiper belt, so the planet title was stripped.  Anything goes in Outer space.