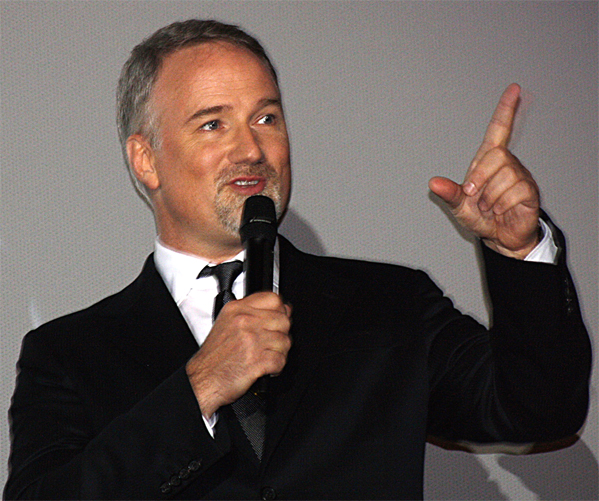 David Fincher was born on August 28, 1962 in Denver, Colorado.  Directing psychological thrillers is Fincher’s business.  Business is good.  His parents are Howard and Claire.  Claire was a nurse.  Papa Fincher was a writer and a reporter for Life Magazine.  The family moved to California when David was two years old.  George Lucas was his neighbor.

Fincher made his first movie on an 8mm camera when he was eight.  He moved to Oregon during his teens and enrolled at Ashland High School.  He directed student plays and helped design the sets for the adolescent thespians.  Time passed and David was hired by the director John Korty’s studio as a production head.  In 1983, he worked with Lucas on the animated film Twice Upon a Time.  His relationship landed him an assistant cameraman position on Return of the Jedi (1983) and Indiana Jones and the Temple of Doom (1984).

David filmed a few television commercials and was hired to direct the Rick Springfield documentary, The Beat of the Live Drum (1985).  The exposure catapulted him into the mainstream and he was hired by several major companies.  Converse, Nike, Pepsi, Levi’s, Revlon, Chanel, Coca-Cola and Sony enlisted Fincher to promote their products.  The money was good, but he hated the medium.  He pivoted to music videos and directed over fifty of them by the early 90’s.  Madonna (“Express Yourself”, “Vogue”, “Bad Girl”, and “Oh Father”), Michael Jackson (“Who Is It”) Aerosmith (“Janie’s Got A Gun”), George Michael (“Freedom! ‘90”) and Billy Idol (“Cradle of Love”) were all shot by Fincher.

His break happened when 20th Century Fox hired him to replace Vincent Ward as the director of Alien 3 (1992).  There were several other changes to the writing team and studio edits that limited David Fincher’s creative vision.  It received an Academy Award nomination (Best Visual Effects), but was considered the weakest installment of the Alien franchise.  The disappoint from the critics led Fincher away from film.  He directed a Rolling Stones music video in 1994 and stumbled upon the screenplay for Seven (1995).

The dark thriller starred Brad Pitt, Kevin Spacey, Morgan Freeman and Gwyneth Paltrow.  The iconic original ending was reinstated by the director and became the trademark of the movie.  The box paid off and Seven grossed over three hundred twenty million worldwide at the box office.  The pundits loved it and the film was one of the most successful pictures in 1995.  Michael Douglas and Sean Penn were cast in The Game (1997) two years later.  His follow-up received mixed reviews.  The Criterion Collection added it to their catalog.

20th Century Fox and David reunited for his next feature.  It was based on the Chuck Palahniuk novel Fight Club and was released in 1999.  Edward Norton and Brad Pitt shared the lead role.  Helena Bonham Carter played support.  The violent exposé garnered polarizing reviews, but Fight Club evolved into a cult classic.  It grossed over one hundred million dollars.  Fincher pitched a mature vision for Spider-Man (2002).  Columbia Pictures turned it down and Sam Raimi was hired.  He did not panic.

In 2002 he directed Panic Room.  The critics loved it, the audience adored it, the studio was enamored and his mother was proud.  The picture grossed close to two hundred million worldwide.  Dwight Yoakam, Jared Leto, Forest Whitaker, Kristen Stewart and Jodie Foster were the stars.  Five years passed and 2007 brought in Zodiac.  It was adapted from Robert Graysmith’s books about the Zodiac investigation.  Robert Downey Jr, Mark Ruffalo, Brian Cox and Jake Gyllenhaal were among the cast.  It was well reviewed and had average commercial success.

A year later, David Fincher released The Curious Case of Benjamin Button (2008).  It was inspired by F. Scott Fitzgerald’s short story of the same name.  It was heralded by the public and did well at the box office.  The film received thirteen Academy Award nominations.  It won three (Best Visual Effects, Best Makeup and Best Art Direction).  Cate Blanchett and Brad Pitt shared the majority of the screen time.

Aaron Sorkin’s screenplay about Facebook was up next.  The Social Network arrived in theaters in 2010.  Andrew Garfield, Jesse Eisenberg, Armie Hammer and Justin Timberlake were the actors.  It earned over two hundred fifty million and received eight Academy Award nominations.  It won three again (Best Adapted Screenplay, Best Original Score and Best Film Editing).  Fincher pivoted to his version of Stieg Larsson’s bestselling novel The Girl with the Dragon Tattoo in 2011.  Daniel Craig and Rooney Mara were the leads.

The television show House of Cards was produced by David two years later.  Gone Girl followed in 2014.  The movie was another adaptation that included Rosamund Pike and Ben Affleck.  Pike received a nod for Best Actress at the Academy Awards.  She lost.  In 2016, he returned to television with the crime series Mindhunter (Holt McCallany and Jonathan Groff).  His latest movie tells the story about the screenwriter of Citizen Kane.  Gary Oldman took center stage in Mank (2020).  It won Best Production Design and Best Cinematography at the Academy Awards.

David Fincher is a perfectionist that demands an average of fifty takes per scene.  His dedication has resulted in a catalog of iconic films.  He is married to the producer Ceán Chaffin and has one daughter from a previous marriage.

“You have a responsibility for the way you make the audience feel, and I want them to feel uncomfortable.”