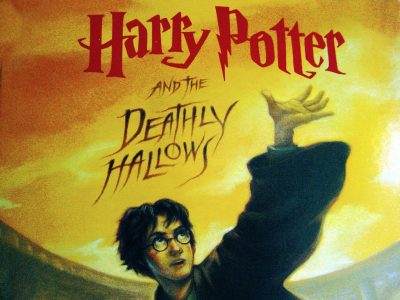 Harry Potter and the Deathly Hallows is the final novel in J.K. Rowling’s fantasy epic.  It resolves the cliffhangers from the Half-Blood Prince and covers the final showdown between Lord Voldemort and Harry Potter.  The story was delivered to readers worldwide in July, 2007.  The story begins inside the Malfoy mansion.  Voldemort and his closest followers are gathered around a table and a prisoner is bound upside-down in the middle.  Snape and the Death Eater Yaxley have conflicting information about Harry’s intended departure date from his Aunt’s home.  Voldemort sides with Snape and kills the prisoner (former Hogwarts Professor of Muggle Studies, Charity Burbage).

Harry packs his things and palms the remaining shard from the mirror that Sirius gave him in the Order of the Phoenix.  He reads a few articles about the life of Dumbledore and sees a glimpse of blue light in the mirror.  It reminds him of his fallen mentor.  The Dursleys are packed downstairs and he says his goodbyes.  Dudley thanks Harry for saving him and the Order arrives to move them into hiding.

More members of the Order arrive and Mad-Eye Moddy unveils the game plan.  Fred, George, Hermione, Ron, Mundungus and Fleur use Polyjuice Potion to create six Harry decoys.  The fakes are intended to fly to separate locations and Harry will go to Tonks’s parent’s home.  Everyone departs.  Hagrid hides the true Harry in the sidecar of his flying motorcycle.  Several Death Eaters appear and surround them.  One of them discovers the real Harry and they leave and return with Voldemort.  Harry’s wand acts on its own and fires off a protective spell.  Hagrid jumps from the bike onto a Death Eater’s broom.  They tumble to the ground.  Harry and the bike plummet into a pond.

Hagrid and Harry awake in Ted Tonks house.  He heals them and they take a Portkey to the Weasley home.  Lupin greets them and the others arrive.  Mad-Eye Moody does not.  He perished from Voldemort’s killing curse.  George Weasley is missing an ear, but he was never a great listener to begin with.  Harry is anxious and distraught that his presence might further endanger his friends.  He turns seventeen and the Trace (a spell that that tracks underage wizards) is lifted.

The Minister of Magic Rufus Scrimgeour meets with Hermione, Ron and Harry in private.  He gives them each a gift left by Dumbledore’s will.  Hermione receives a book titled The Tales of Beedle the Bard and Ron gets a Deluminator.  Harry is handed a Snitch and is bequeathed the sword of Godric Gryffindor.  Scrimgeour says the sword was not Dumbledore’s and will remain at Hogwarts.  Harry is bummed, but still has his Quidditch memento.  Rufus leaves and Harry puts the Snitch in his mouth.  The words “I open at the close” appear, but it remains shut.

Bill and Fleur get married the next day.  Death Eaters attack the wedding.  Scrimgeour is slain and the Ministry of Magic falls to Voldemort.  The gang flees to a café with their provisions.  A few Death Eaters appear and they run.  They decide to take cover at Number Twelve Grimmauld Place.  Harry’s scar burns.  The group realize that Sirius’s brother, Regulus Arcturus Black (R.A.B.) was the one who stole the locket.  It is no longer in the house and they summon the house elf Kreacher for more information.  He tells them that Mundungus stole the locket and Dolores Umbridge is now the owner.

Time passes and Snape is the new headmaster at Hogwarts.  The trio breaks into the Ministry of Magic using Polyjuice Potion and steal the locket from Umbridge.  They are unable to destroy it and retreat to the wilderness.  The locket’s dark magic begins to corrupt the friends.  They take turns wearing it to mitigate the effect.  Ron abandons the group when it’s his turn to bear the burden.

Harry and Hermione travel to Godric’s Hollow.  Voldemort’s snake Nagini attacks them and they escape.  Harry damages his wand during the endeavor.  A silver doe Patronus appears in the middle of the night.  Harry follows it to a frozen pond.  The Sword of Gryffindor lays at the bottom.  He strips and plunges into the cold depths to retrieve it.  He fades to black and Ron saves him by cutting the locket off his neck.  Ron takes the sword and destroys the locket.  The gang is unified.

Hermione studies the novel Dumbledore left her and notices a symbol that Luna Lovegood’s father wears.  They locate and visit Xenophilius Lovegood.  He is hesitant when they arrive and tells them the symbol is the sign of the Deathly Hallows.  It has nothing to do with the dark arts.  The legend states that three brothers tricked Death and in return received three magical gifts (an Invisibility Cloak, the Elder Wand and the Resurrection Stone).  Together they form the Deathly Hallows.

Everyone discusses the myth and Death Eaters appear.  They kidnapped Luna and Xenophilius betrayed the friends in order to save her.  The trio escapes and deduce that the Snitch contains the Resurrection Stone and that the Elder Wand is in Dumbledore’s tomb.  Time progresses and a ring of Snatchers capture the group.  Hermione disfigures Harry’s face with a spell before they are seized.  They are taken to Malfoy Manor.

Bellatrix interrogates Hermione and does not recognize Harry.  They are cast into a basement dungeon.  Dean Thomas, Ollivander, Luna and Griphook are already resident prisoners.  Everyone shares pleasantries.  Dobby arrives to save the captured.  They teleport to Fleur and Bill’s home, but Dobby dies in the process.  The group grieves and buries the heroic house elf.  Ollivander tells Harry his wand cannot be repaired.  At Hogwarts, Voldemort takes the Elder want from Dumbledore’s grave.

Weeks pass and Griphook agrees to help the gang break into the Lestrange’s Gringotts vault.  The objective is to search for a Horcrux.  The goblin demands the Sword of Gryffindor as compensation for his assistance.  Harry acquiesces and promises to give the sword up after they are successful.  Bill warns Harry about the implications of making deals with goblins.  The day of the heist arrives and they use Polyjuice Potion to secure the Hufflepuff cup Horcrux.  Griphook steals the sword in the process.  Harry has a vision through Voldemort’s point of view.  The Dark Lord decides to keep Nagini, a Horcrux, by his side for safe keeping and return to Hogwarts to check on another.

The new info from the foresight leads Harry and company to Hogsmeade.  They run into Death Eaters and escape under the Invisibility Cloak.  Dumbledore’s brother Aberforth assists them and they meet Neville Longbottom behind a painting concealing a hidden passage into the school.  He gives them a status update on the condition of Hogwarts and they walk through the passage.  Everyone enters the Room of Requirement and reunites with Dumbledore’s Army.  A discussion happens and they conclude that the missing Horcrux is the lost diadem of Ravenclaw.

Luna and Harry go to the Ravenclaw common room and Potter is apprehended by a Death Eater.  Luna disarms the threat.  Voldemort is summoned through the Dark Mark.  Professor McGonagall arrives.  Snape appears and duels McGonagall.  Other professors come to help her and Snape flees.  Voldemort enters Hogwarts with Nagini and the school transitions into full pandemonium.  Harry links up with Hermione and Ron who retrieved the basilisk fang from the Chamber of Secrets.  Its retrieval allowed them to destroy the cup.

They head back to the Room of Requirement and locate the diadem.  Draco, Goyle and Crabbe confront them.  They try to kill Harry by using a fire curse, but it is too powerful and Crabbe dies.  The diadem is destroyed.  A battle emerges near the entrance and Fred Weasley perishes.  Voldemort kills Snape because he believes he is the Elder Wand’s true master.  Harry witnesses his dying breath and Snape gives him his memories.  Snape was a double agent.

Harry understands he has to die in order to destroy the Horcrux that lives in him.  He opens the Snitch and discards the Resurrection Stone and his cloak.  Voldemort slaughters him and he fades to white.  Dumbledore greets him in a dream and updates him on the metaphysics of the situation and the Deathly Hallows.  He can return to the living or move on.  The hero lives on and returns.  Neville slays Nagini.  The final skirmish ignites and Molly Weasley kills Bellatrix.  Voldemort attempts to end Harry with the Elder Wand, but the killing curse backfires and he is destroyed.  Harry was the true master of the wand after disarming Draco earlier.  The wand is returned to Dumbledore’s grave and the Deathly Hallows are no more. Peace sweeps the world.

The book ends nineteen years later revealing that Harry and Ginny are married with three children.  Ron and Hermione tied the knot and have two kids.  J.K. Rowling neatly tied her epic and Harry Potter and the Deathly Hallows is considered the apex of the series.

0 comments on “Harry Potter and the Deathly Hallows”