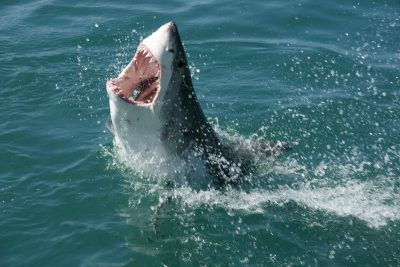 Great white sharks have a cone shaped nose and the top and bottom tail fins are proportionate.  Their irises are blue.   They have a gradient coloring.  The underbelly is white and the dorsal area is gray.  The color separation masks its appearance.  The top pigment blends into the sea and the white underside reduces their outline against the sunlight.  Serrated and replaceable teeth sit behind the main row.  They are razor sharp and dissect prey into large, but manageable chunks.  Decorum is a top priority.  Their bite force is over ten kilonewtons.  That is twice the power of a Jaguar.  The jungle cat does have the advantage on land.

Everything is on the menu.  They eat fish, stingrays and other sharks.  Dolphins and whales are targets.  The big sea…three cannot escape: seabirds, sea turtles and sea otters.  Inanimate objects are sometimes consumed.  Tasting unfamiliar dishes is important to the shark.  That characteristic is the determining factor of importance and would remove the “great” from their moniker.  The tepid white shark is not breaking news.  Whale corpses are a vital component of their diet.  Close to seventy pounds of blubber can feed a fifteen-foot great white for over a month.  The odor draws the shark in and they select the most nutritious piece.  The ordeal can take several hours.  Good things come to sharks that wait.

Male great whites are smaller than the females.  They are eleven to thirteen feet long and their brides are between fifteen and sixteen feet.  Adults have an average weight of 1,500 pounds.  Females can reach around 2,400 lbs.  The biggest on record are about twenty feet and four to five thousand pounds. The giant manta ray, basking shark and whale shark are bigger on average, but docile.  This makes the great white shark the largest living predator among the cartilaginous fish.

Studies have determined that the sharks reach sexual maturity by the age of twenty-six (33 yrs. for females).  This is much later than the original accepted age of fifteen, when their max lifespan was assumed to be thirty years.  The Woods Hole Oceanographic Institution (WHOI) conducted a study and concluded that males can live over seventy years and females up to forty.  Their mating habits are generally unknown and birth has never been observed.  Examination of pregnant females have confirmed that the species is ovoviviparous (eggs that hatch and continue to develop until birth).  The mom shark has an eleven-month birth cycle and they deliver their young during the spring and summer months.  Over ten baby sharks are born at once.

The singular member of the genus Carcharodon is the great white shark. Carcharodon translates to “jagged tooth”.  Carchar is Ancient Greek for jagged and odon means tooth.  J.T. is one of the affiliates of the Lamnidae family (including the salmon, porbeagle, shortfin mako and longfin mako sharks).  The other JT, Justin Timberlake, is brining sexy back.  Jagged Tooth never allowed sexy to leave.

Scientists once believed the great white shark was related to the prehistoric mega-toothed sharks, such as the fifty-foot Megalodon.  The triangular notched teeth were the primary factor.  Paleontologists reviewed the fossil record and charted the lineage back to the extinct Cretalamna shark (lived 100 to 45 million years ago).  Gaps in the record and modern analysis have now placed the great white in the same vein as the mako’s pedigree, away from the mega sharks.  The detection of the transitional species Carcharodon hubbelli (lived five to eight million years ago) filled the gap.  Gordon Hubbell was responsible for the discovery and its namesake (Hubbell’s white shark).

Most of the ocean is the great white’s home.  They thrive amid costal temperatures of 55 to 75 degrees Fahrenheit and are concentrated in the United States, Japan, South Africa, Chile, Oceania and the Mediterranean.  The densest cluster is located by Dyer Island, South Africa.  Some sharks dive as deep as three thousand feet and make long migrations away from the coast.  This has been observed in a portion of the ocean between California and Hawaii.  The location is called White Shark Café.  The purpose of the visit is unknown, but there are no baristas or coffee for miles.

A dietary overlap has created an interspecies competition with orcas in certain regions.  Great whites choose to flee an area if one is attacked.  The scent of a deceased shark acts as a deterrent.  Killer whales are larger and have the connotation of murder in their name.  Fearless sharks have been spotted swimming next to orcas.  The event is uncommon.

The exact number of the great white shark population is unknown.  Fishing for sport and mementos (teeth, fins and jaws) has caused a visible decline.  Their flesh is valuable, but commercial fishing is not an issue.  The IUCN has the shark listed as vulnerable.  The Memorandum of Understanding on the Conservation of Migratory Sharks added them to Annex I in 2010.  The Australian Government protects them under the Environmental Protection and Biodiversity Conservation (EPBC) Act.  Australian Parliament enacted it on July 16, 2000.  New Zealand shields the sharks with a maximum fine of $250,000 and up to six months in prison.  California added them to their Endangered Species Act in 2013 and Massachusetts has banned interaction altogether.

Shark attacks are rare and only four species have attacked a human unprovoked.  Great whites are the most violent, but there are only several hundred verified episodes.  They do not strike due to mistaking a person for a seal.  The gaffe occurs in clouded and low visibility water where their senses are impaired.  Humans are undesirable due to their bone to flesh ratio.  The bones can run havoc on the great white’s digestive tract.  People can run away which prevents fatalities too.  Peter Benchley’s novel Jaws (adapted into a film in 1975 by Steven Spielberg) portrayed great white sharks as the villain, but the data suggests otherwise.