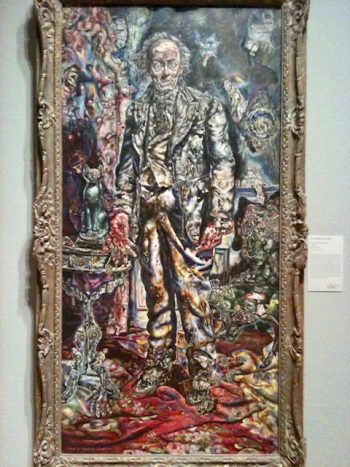 Picture of Dorian Gray represents the corrupted state of Dorian Gray and was painted by Ivan Albright.  He painted it in 1943 and it was used in the film adaptation of Oscar Wilde’s The Picture of Dorian Gray.  The film was directed by Albert Lewin and released in 1945.  Hurd Hatfield (double “H”) played Dorian Gray.  The picture hangs in The Art Institute of Chicago and is visible to the public.  The museum is located at 111 South Michigan Ave in Chicago, IL.  There are close to 300,000 pieces of art here and around 1.5 million people visit yearly.  Presumably to view this lurid, dark masterpiece.

Conversation with a curator.  The Art Institute of Chicago.  Modern Day.

“A Sunday Afternoon on the Island of La Grande Jatte (Georges Seurant) is over here. Not interested? This is unusual.  Well, how about we take a look at some Picasso.  Here is The Old Guitarist.  You love Picasso, right?  No!?  He is one of the best to ever do it you know. Hmm…okay…Twombly?  Yes!  His name is in fact Cy.  Very good, it is right this way sir.  Sigh…perhaps Jackson Pollock, …Jasper Johns.  Oh, don’t be so dramatic!  We have plenty of work from artists with a first name that does not start with “J”, don’t be silly.  Maybe Warhol?  Some beautiful photography from Georgia O’Keeffe?  Excuse me sir, why do you keep shouting Dory. Hush, hush, hush.  I am not sure what you mean. Please keep your voice down.  This is a museum…a…ah…an institute!

Ahh Dorian yes. Picture of Dorian Gray by Ivan Albright is down the stairs over here.

The Picture of Dorian Gray was controversial when it was published and it is Oscar Wilde’s only novel.  It was censored upon its July 1890 release.  Five hundred words were cut out and Wilde spent significant time defending his art.  Dorian G. is the subject and muse of the painter Basil Hallward.  Basil is an herb used for cooking and adds the right amount of flare to a boring dish.  Imagine you cooked the perfect meal.  Now imagine you cooked the perfect meal with basil.  Do you see it?  Yes, yes you do.  Delicious.  Basil is native to tropical climates in Southeast Asia, Africa and India.  The ancient Greeks placed the herb in the hands of their dead.  The idea was it would unlock the gates to heaven.  This tradition has faded, but basil still unlocks the taste buds of millions today (heaven on Earth).

Hallward creates a giant painting of our protagonist and is mesmerized by Dorian’s beauty.  Dorian’s aura inspires him and they become friends.  Lord Henry Wotton witnesses the painting’s inception.  He expresses his decadent and indulgent views on life to D.G.  Dorian analyzes them and decides that pleasures of the flesh and beauty are the sole purposes of life (Dorian decides and Simon says).  This epiphany incites Dorian to do what anyone would do when they are watching themselves materialize on canvas.  “I would like to sell my soul, please.”  The idea is that for the price of one soul, the picture would age instead of him.  He would stay young and vibrant and the painting would absorb the inevitability of time.

Hanging out with a Lord has benefits.  Dorian meets an actress named Sibyl Vane.  He proposes to her and invites Hallward and Wotton to one of her performances.  She gets nervous and botches her lines.  Dorian is livid and rejects his fiancé.  He returns home and notices that the picture has transformed.  Dorian feels guilty and reaches out to Sibyl.  He finds out she committed suicide and decides to never look back.  He locks the painting up and indulges in any vice he encounters.

Time passes and Dorian Gray continues to abuse his body.  He shows Hallward the painting that is now unrecognizable.  Basil is mortified and pleads to Dorian to pray for forgiveness.  Dorian does not like this and decides to kill Basil.  He does this with a knife.  Now there is lifeless person on the floor.  He blackmails his scientist friend Alan Campbell to get rid of the body.  Alan cannot live with his actions and ends his life.

Dorian hides out in an opium den to cope with his remorse.  Lots of opium is consumed.  James Vane is there.  He is Sibyl’s brother (same last name) and he wants revenge for her suicide.  James confronts Dorian and realizes that the man in his grasp is too young.  James releases him.  Dorian leaves.  A woman tells James that D.G. hasn’t aged in years and that the man he let go was indeed Dorian.  James is bummed and stalks Dorian.  He follows Dorian on a hunting trip and accidently gets shot.

The hedonistic lifestyle reaches its apex and Dorian tells Wotton that he is going to reverse his ways.  The painting continues to devolve and he understands that his motives were selfish.  He decides to destroy the picture, but it destroys him and he dies.  The portrait is returned to its initial perfect state. D.G. ages.  After years of abuse, the only identifying feature on the gray corpse are his rings.

Ivan Albright was born on 2/20/1897 and lived to be 86 years old. His birthplace was close to Chicago in North Harvey, IL.  He dropped out of Northwestern University and decided to attend the University of Illinois at Urbana-Champaign.  Philadelphia was his home for some time.  By 1930 he was back in Illinois and had his first show.  He lived in Woodstock, Vermont in the 60’s and lectured at Dartmouth in the 70’s.  Dartmouth College (Big Green) is located in Hanover, New Hampshire.

Albright’s technique was meticulous and involved using hundreds of small brushes and his own color combinations.  His paintings took years to complete.  This allowed him to manipulate the canvas and bring out the corrosion of his subject.  His art allows a lot of interpretation with its surrealist tones.  Critics have grouped his body of work with American Magic realism.

Into the World There Came a Soul Called Ida is a fantastic painting by Ivan.  Picture of Dorian Gray is his Magnum opus.

0 comments on “Picture of Dorian Gray”