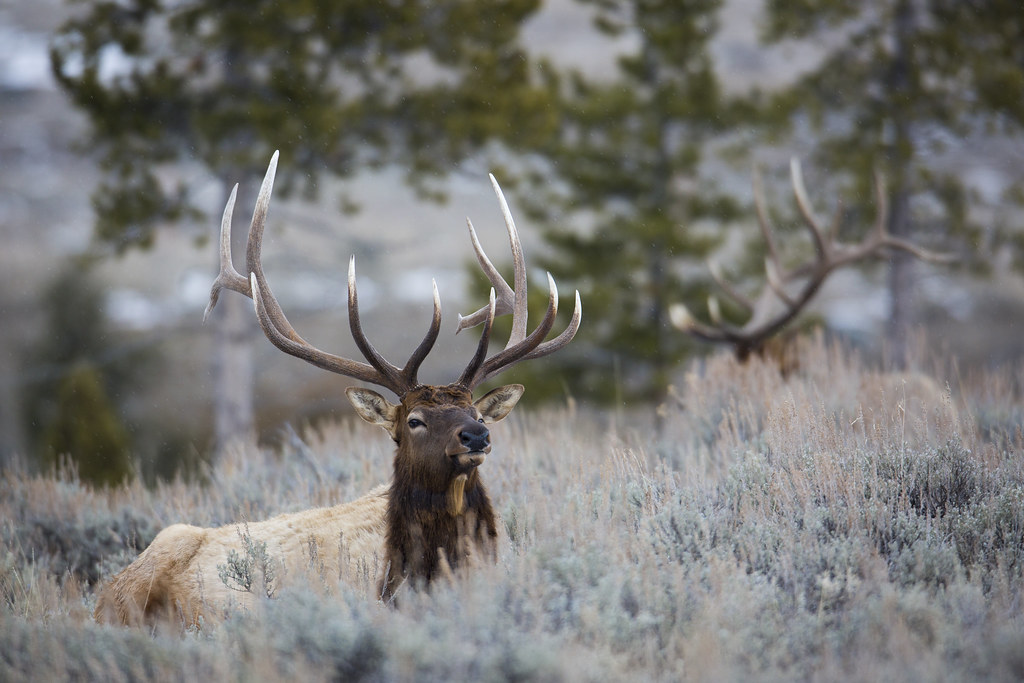 The elk or wapiti is one of the biggest land mammals in North America and Asia.  The moose is larger.  They are both members of the Cervidae or deer family.  Four subspecies of elk are from Asia and six reside in North America.  Two of the American variants are extinct.  Six minus two is four.  Scientist did some research with DNA.  They had a blast.  The results shocked the elk world deep inside their antlers.  The Deoxyribonucleic acid revealed that most of the American elk are related and can be placed into one or two subspecies.  A nascent hush.  The elk continue to graze.

Seventeenth century Europeans equated the word elk to a large deer.  The American settlers were introduced to the species (Cervus canadensis) and recycled the phrase from their European homeland.  The Cree and Shawnee word for wapiti is waapiti.  It means white rump and is a characteristic of the subspecies.

Elks have four-chambered stomachs like giraffe and other ruminants.  They love to graze like cattle and feed low to the ground. They browse too.  Not the internet, but leaves, shoots and fruits from high growing plants and shrubs.  They tend to eat those sweet…sweet greens in the morning and nighttime.  Around twenty pounds of vegetation is consumed.  The day is used for processing food (carpe digestion).

Males are longer than females.  The elk ranges between five and nine feet.  Their shoulders stand two and half feet to five feet from the ground.  The fellas weigh between four hundred and one thousand pounds on average.  The ladies are under six hundred and fifty.  The Roosevelt elk is the heaviest.  Some have been documented north of thirteen hundred pounds.

The North American and Siberian elk have the largest antlers.  The Altai wapiti features the smallest.  A soft layer of skin (velvet) covers the antlers when they are growing.  They develop up to an inch a day and are made of bone.  Six prongs per antler is the average.  The biggest weigh up to forty pounds.  Testosterone spurs their growth.  The frigid blanket of winter lowers testosterone and the causes them to shed.

Summer ends and the fall arrives.  A thick coat of hair comes after.  It insulates the elk during the winter.  Spring concludes and shedding occurs.  They rub against trees to help remove the leftover hair.  The bark tickles.  The elk laugh.  A short tail sits behind.  The coloration of the fur changes with the seasons.  Forest elk have the darkest bodies.

What do you call a female elk?

Female elks are called cows.  The boys are bulls.  The babies are calves.  Gestation lasts between two hundred forty and two hundred sixty days long.  The newborns weigh around thirty-five pounds and are spotted.  The mothers isolate from the herd after giving birth.  One calf is born.  Two are possible, but it is uncommon.  They rejoin when their child can evade predators.  The spots dissipate after the summer.  They will live fifteen years in the wild and twenty in captivity.

Cougars, black and brown bears, coyotes, wolves and Siberian tigers are the animal’s main predators. Packs of coyote will target calves.  Bear attacks are more common.  There are no recorded incidents of a bear killing a healthy, full-grown bull.  The bear may perish trying to grab the elk by the horns.  Elks roam within large groups to increase their chances of survival.  They are most vulnerable in the winter.

Elks are more amiable than any other deer species.  The dears form herds that grow to four hundred members in the summer.  The males and females split apart during the other seasons.  The cow’s factions are larger.  Some bulls travel alone.  Adolescent boys associate with both groups.  Everyone travels by hoof.

Twenty to twenty-five pounds of antler velvet can be harvested from a male each year.  It is collected and sold to East Asian markets for medicinal use and as an aphrodisiac.  Consuming velvet from North American elk poses the risk of disease and is not recommended.  The David Lynch film Blue Velvet (1986) is recommended.  Antlers are used in furniture and artwork.  Tepees, shoes and clothes are made with their hides.  The meat is not common and sold as a specialty.  It is high in protein and has less fat and cholesterol than chicken, pork and beef.  Food for thought.