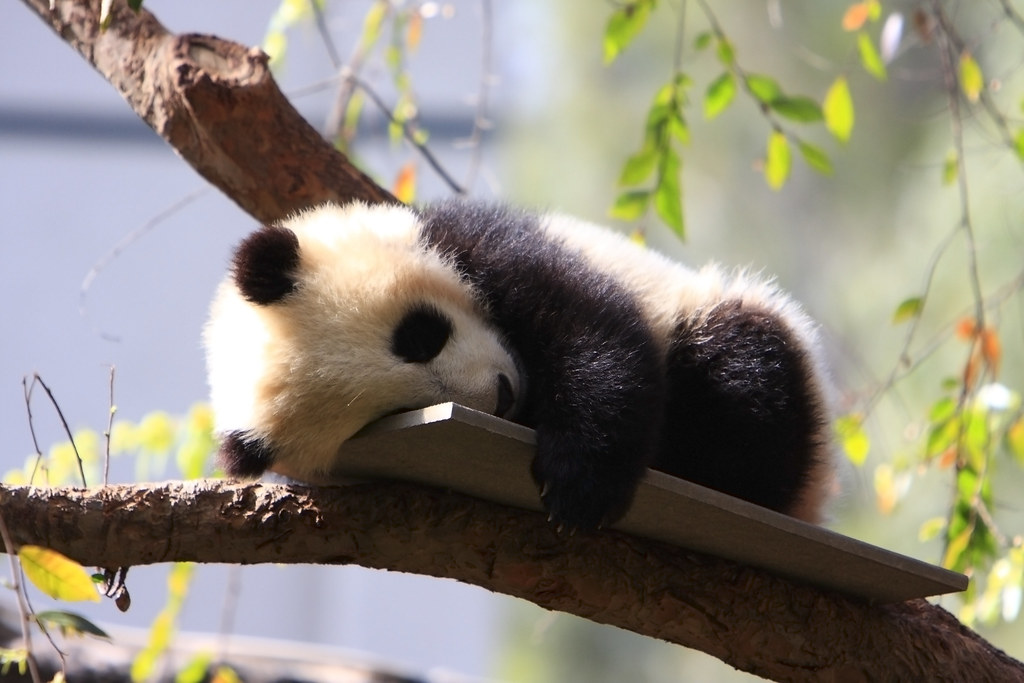 The giant panda is the formal name for the panda bear.  The giant moniker is to differentiate the bears from their smaller neighbors, the red panda.  The English and French language are the derivative for the word panda.  There is no universal origin and the Nepali word ponya (a red panda’s wrist bone) may be applied.  Dictionaries today refer to red pandas as pandas and panda bears as giant pandas.  There is a yearly conference to decide which one is the cutest.  It usually ends in a draw.

Bamboo is what a healthy panda bear lives off of.  They are classified as carnivores, but over ninety-nine percent of their diet is made up of that sweet, sweet boo.  Two different species are required to avoid starvation. Fish and meat are sometimes consumed as an alternative.  Eggs are eaten when they are available. Unique microbes in their stomach allow them to digest cellulose.  Their intestinal system is evolved and they have survived on the forest bamboo for millions of years.  Twenty to thirty pounds are consumed a day.  Most of it is indigestible and they pass it through their small and straight digestive tract.  Pandas can poop up to forty times a day as a result. Humans should visit a proctologist if they do the same.

Adult giant pandas range from four to six feet long.  Their tails are between four to six inches.  The length is the second longest in the bear family.  The sloth bear has the longest.  Pandas are elevated two to three feet from the ground.  The average panda weight is around two hundred fifty pounds.  Males can weigh up to three hundred fifty pounds and females can grow up to two hundred seventy-five pounds.  Black fur coats their nose, legs, shoulders, arms, ears and eyes.  The rest is white.  The colors create a vibrant contrast.

Panda fur coloring is an enigma in the scientific community.  Most theories suggest that the black and white provides camouflage in their snow filled and rocky habitat.  The eye patches allow them to identify each other.  The fur’s density keeps them warm.  Their paws have five fingers and a thumb that helps them grip bamboo.  A round adorable face is a product of their low metabolic rate.  Powerful jaw muscles and large molars help them eviscerate plant fibers.

Giant pandas are terrestrial and stay out of water.  They can be found prowling the hills of Sichuan and the Qinling mountains.  Their peak activity occurs in June and decreases after the Summer.  They are more energetic when the following March rolls in.  They prefer solitude.  Adults have a specific territory.  Females do not allow other panda gals inside their domain.  Social life is lacking and the pandas only congregate to breed.  Once the deed is completed, the male will leave the female on her own.

Sexual maturity is reached between four to eight years old.  Panda bears reproduce up until their twenty-first birthday.  Mating season is during the Spring.  The cubs are born sometime between one hundred and one hundred sixty days.  Twins are born fifty percent of the time.  They are pink in color and blind.  The panda mom will select and care for her strongest offspring.  The other dies in the wild.  The father is nowhere in the picture.

Historically, pandas were viewed as noble and exceptional creatures.  Their skin was used as an offering of goodwill in past eras.  The Ancient Chinese Empress Dowager Bo was buried with a panda skull.  The western world was unaware of the panda presence (PP) until early 1869.  The discovery occurred when a French missionary was given a panda bear skin from a hunter.  A German zoologist was the first to view a living bear in the wild.  The sighting was in the early 1900’s.  Theodore Roosevelt, Jr. was the first to hunt one and the Chicago Brookfield Zoo was the panda’s first Western habitat.

The Western Han Dynasty in China was the first era to display pandas in zoos.  A writer noted that it was the reigning emperor’s favorite animal.  The modern cost of maintaining one is five times that of an elephant.  American zoos pay the Chinese government one million dollars a year to host one.  They are the most expensive observable animal.

Habitat loss and low birthrates have landed the panda bear on the vulnerable species list.  Poaching throughout history has also contributed.  About three thousand live in the wild.  Today there are forty forest reserves in China to help maintain their numbers. The number has tripled since the nineties.  The species is well protected and the price is high.  The opportunity cost has drawn criticism within the scientific community.

Pandas are calm beings.  Sometimes they attack humans.  The motive is irritation and not aggression.  There are a few predators apart from humans.  The cubs are susceptible to attacks from yellow-throated martens, snow leopards, wild dogs, Asian black bears and eagles.  Malnourished adults may fall prey to leopards.