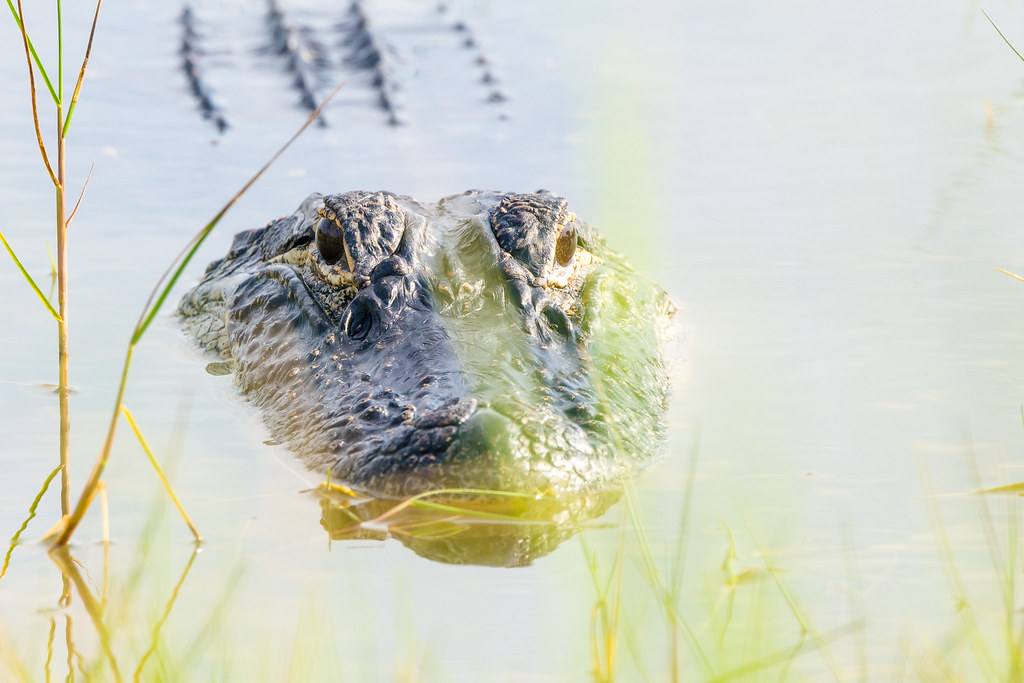 The alligator is a crocodilian and a member of the Alligator genus.  The genus first appeared over ninety-five million years ago.  Gators emerged in the Oligocene epoch about thirty-seven million years ago.  Alligators are not crocodiles.  Crocodiles are not alligators.  They do have a lot to talk about and their interspecies reptile conversations do scale.

The word alligator is derived from the Spanish term el lagarto.  It means the lizard.  The first Spanish Floridian explorers introduced the term.  It evolved into alagarto and allagarta before it was finalized as alligator.  There are two species.  The American and the Chinese alligator.  The later split apart from the former around thirty-three million years ago.  They both diverted from the caimans in the late Cretaceous period over fifty million years ago.

Alligators are found in China, Mexico and the United States.  American gators prowl around in Florida, Georgia, Alabama, Louisiana, Mississippi, South Carolina, North Carolina, Oklahoma, Arkansas and Texas.  Most live in Florida and Louisiana.  Over a million reptiles are found in each state.  Crocodiles and alligators live in harmony in Southern Florida and in a micro community found in Tamaulipas, Mexico.  They are the only places on the planet where they do so.

Where do alligators live?

Ponds, lakes, rivers, wetlands and marshes are the American alligator’s stomping grounds.  They love brackish water, but hate brackish talk.  When a gator states an opinion, it is absolute.  They despise negative numbers and feedback.  The English gators are vital for their ecosystem and procreating diversity.  Their construction of wetland holes helps proliferate plant species and provide solace for other animals during droughts.  The Louisiana Bayou Boys (B.B.) feed on invasive muskrats and coypus that harm the coastline.

Chinese alligators are extremely rare and endangered.  There are less than fifty in the wild.  They are only found in the Yangtze River valley and the neighboring providences.  There are more located in zoos throughout the world.  The Rockefeller Wildlife Refuge in Louisiana has a small population in captivity for conservation efforts.  The Miami-Dade Zoological Park and Gardens houses a single breeding pair with the hopes to do the same.

American alligators weigh almost eight hundred pounds and average thirteen feet in length.  Some grow up to fourteen feet and weigh close to one thousand pounds.  The longest recorded was measured at nineteen feet and two inches.  It was found in Louisiana.  The Chinese gators are significantly more petite at seven feet long and under one hundred pounds.

Adults are dark brown with tones of olive or black in color.  Their bellies are white.  Baby alligators (gator bites) are dark with yellow or white stripes.  The pattern on their hide provides additional camouflage against the grasses and reeds of the wetlands.  The total lifespan of the protagonist is unknown.  The longest life that was cataloged was eighty-four years in the Moscow Zoo.  The reptile’s name was Saturn.  The oldest captive gator is in its eighties and lives in the Belgrade Zoo in Serbia.

Adolescents feed on insects, worms, fish, snails and crustaceans.  Adults consume large fish, turtles, muskrats and coypus.  They will chomp on birds, other reptiles and deer.  Carrion is on the menu when food is scarce.  Their stomachs hold gizzard stones to aid in digestion.  Large alligators will attack panthers, bears and dogs.  The apex predators set the environmental tone.  They do not view humans as prey.  Oversized crocodiles do.

Large males live in solitude and are territorial.  Smaller boys group together in large numbers.  The smaller the gator, the higher the tolerance for their own kind.  They navigate through two methods of locomotion.  Their high walk is achieved on all four limbs and is used to push over water and wet substrate.  The spawl is a frontward movement where the belly is connected to the ground.  It is used for short engagements and to transition into the high walk.

Their metabolism is slow and they have a heavy body, but small bursts of speed are possible.  A quick lunge can swallow prey with a single bite.  Bigger meals are dragged under water and drowned.  They use a tactic called a death roll by spinning the prey and tearing off chunks of meat.  Their tail is used to balance and contort.  Gators with nonfunctional tails cannot perform the roll.  An alligator’s jaw has evolved to grip and bite.  The muscles that snap down are powerful.  The reopening muscles are weak.  Humans can hold the jaw shut with their bare hands.  Duct tape around the mouth is sufficient for transportation and handling.

Mating takes place in late spring.  Alligators group together for a few hours before sunrise to copulate.  Males will bellow and slap their head on the water to attract mates.  The courtship is called an alligator dance.  Time passes and summer settles.  Females build a nest of vegetation.  It decomposes and provides the heat for the eggs.  Males are normally created in hotter nests.  Females are born in a five to one ration to males.  Mamma gator is protective and will protect her young to the death.