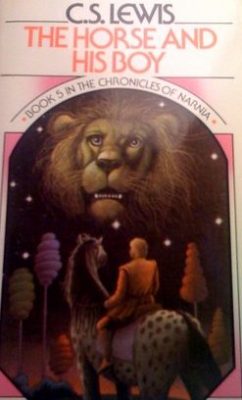 The Horse and His Boy is the fifth book in The Chronicles of Narnia after The Silver Chair.  It was released in 1954 and appears third in the chronology of the storyline.  C.S. Lewis is the author and the man behind the pen.  The woman behind the brushes is Pauline Baynes.  She was the illustrator and her artwork is still circulated in the modern editions today.  The plot includes some of the Pevensie kids and takes place during their rule of Narnia in the last chapter of The Lion, the Witch, and the Wardrobe.  The main character is a horse and his boy.  The title was crafted around this dynamic.  Its selection process was extensive, but once C.S. puts his mind to something the results are unadulterated.

The boy is named Shasta.  His name has no relation to the value-priced soft drink Shasta.  The soda is titled after Mount Shasta in northern California.  The boy is unaware of the mountain and California’s existence.  He lives in the land of Calormene.  His father Arsheesh is a fisherman and abusive.  Life is rough for young Shasta.

A wealthy lord passes through one day and demands housing for the evening.  Arsheesh offers up Shasta’s room and sends his son to sleep in the stable.  The boy is upset and eavesdrops on the adult’s conversations.  Anradin (the lord) offers to buy him as a slave.  His father agrees and admits that the boy is not his real son.  Shasta is sad, but relieved.  Their relationship was tumultuous and no real love blossomed between the two.  The boy returns to the stable and begins to talk to himself.  He asks the barn what type of man his new master is.  He is surprised to receive an answer.

The lord’s horse can talk.  His name is Bree and his life is not a breeze.  One would think having vocal cords as a horse would be a competitive advantage, but Anradin is cruel and that was the response the boy was given.  Shasta learns that Bree is from the land of Narnia in the north and that he has suppressed his gift of gab in order to survive in Calormene.  Bree was captured and his situation in the big “C” was just as dire as his new friend’s.  They debate their current state of affairs and Bree hatches a plan.  The horse and his boy decide to run or rather gallop away.

Weeks pass by.  Shasta and Bree continue north.  A group of lions attack and they evade the beasts.  Another Calormene lord on horseback joins them during their escape.  The lord turns out to be a young girl named Aravis who has stolen her brother’s armor.  The horse is named Hwin.  She can talk too and instantly bonds with Bree over their shared vocal cords.  Shasta and Aravis do not get along.  Aravis doesn’t have daddy issues, but is fleeing an arranged marriage.  The boy can’t relate.  The city of Tashbaan comes into sight and the fugitives plot how they will navigate the unavoidable cityscape.

They decide to disguise themselves as peasants and push on.  Their backup plan is to meet at The Tombs of the Ancient Kings if they get separated.  Things are going well until King Edmund mistakes Shasta as a runaway prince.  He brings him to Queen Susan and she greets the boy as Corin.  Shasta stays silent and the Narnian royalty discuss their plight.  The Calormene Prince Rabadash is acting capricious about a marriage proposal and is a violent dude.  They scheme an escape through a secret desert route.  The plan is further debated and changed to a ship-bound one.  Everyone prepares to leave.  Shasta is left deserted.

Prince Corin returns through a window.  His appearance is identical to Shasta’s.  The twins talk and Shasta pops out of the window to find his friends.  He meets a stray cat that looks like a lion and sleeps.  Aravis runs into an old acquaintance who helps her flee.  She overhears Rabadash’s evil intentions during her journey to the city’s outskirts.  He wants to invade Narnia and kidnap Queen Susan.  Aravis ends up making it to The Tombs of the Ancient Kings by boat.  The loquacious horses and Shasta are waiting.

The horse and his boy and the other horse listen to Aravis’s update on Rabadash.  They head out into the scorching desert.  Their goal is to beat Rabadash to the finish line.  Time passes and Shasta thwarts another lion attack.  They find shelter in the home of the Hermit of the Southern March.  The Hermit heals their wounds and fills their stomachs.  Shasta is the only traveler with enough strength to continue.  Time is running out and he is forced to continue alone.

The isolated boy overcomes the plains and heads into the forest.  He finds a hunting party and King Lune.  The king mistakes him for his son Corin.  Shasta warns him about Rabadash.  Lune gives him a horse.  This one can’t talk.  They all dash to the castle.  Fog rolls in and makes it hard to see.  That’s the fog classic.  Shasta is separated and wanders down the wrong road.  He hears Rabadash’s army.  They take the other path.  He is safe, but lost.  He continues and feels a presence.  He asks who’s there and Aslan replies.  Shasta shares his life story with the lion and big “A” reveals that he was the lion who kept appearing.  The boy is glad and Aslan leaves.

He makes it to Narnia and meets several creatures that are not bothered by his warnings.  Duffle the dwarf is concerned and sends a stag to warn the residents of Cair Paravel.  The dwarf replenishes Shasta’s supplies and they meet up with the Narnian army.  Prince Corin is there and greets the boy.  Everyone arrives at the castle and a battle ensues.  King Lune and his forces defeat Rabadash.  Aslan enters and straightens the narrative out.

Shasta is recognized as King Lune’s eldest son and is named the crown prince.  Corin is thrilled and never wanted the responsibility.  The boy is reunited with the horses and Aravis.  He asks her to stay and she accepts.  They get married and have a son.  Hwin and Bree prance away and eventually elope with different horses.  The two remain friends and The Horse and His Boy ends.

2 comments on “The Horse and His Boy”