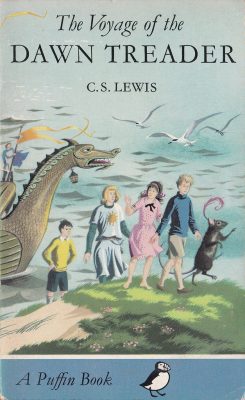 The Voyage of the Dawn Treader is the fifth volume in the modern serialization of C.S. Lewis’s The Chronicles of Narnia adventure.  Mr. Lewis completed the novel in 1952. It was the third Narnia tale printed after The Lion, the Witch and the Wardrobe (1950) and Prince Caspian (1951).  Pauline Baynes provided the wonderful illustrations and Geoffrey Bles was the publisher.  The Voyage of the Dawn Treader sent the readers out to sea with the youngest Pevensie children and their petulant cousin Eustace.

Edmund and Lucy spend the summer in Cambridge at their relative’s house.  The time off is enjoyable.  Their interactions with their cousin Eustace Scrubb are not.  He has an unpleasant disposition and constantly teases them.  One day, Lucy and her brother are deep in conversation about the magic of Narnia.  They are relaxing in her room near a painting of a Narnian ship.  Eustace shows up and mocks the existence of Narnia.  The picture comes to life and the trio are transported to the vessel from the painting.  The ship is named the Dawn Treader and King Caspian is present.  The Pevensie kids are delighted.  Cousin “E” is not.

Eustace gets seasick and fails to integrate with the crew.  The captain of the Dawn Treader is Lord Drinian and his first mate loves cheese.  That’s because he is a belligerent talking mouse named Reepicheep.  Lucy and Edmund catch up with Caspian and learn that three Narnia years have passed compared to the one in England.  His mission aboard the ship is to locate the seven missing Lords (Lord Rhoop, Restimar, Octesian, Mavramorn, Argoz, Bern and Revillian) that were devoted to his father King Caspian the Ninth.  The world had entered a time of peace and the luxury could be afforded.  The assignment is to explore the ocean to search for the nobles.  Eustace logs all of his problems in a diary.

The Lone Islands are in sight and they decide to visit its outer island (Felimath) before they land.  A posse of slave traders capture them and sell Caspian to a lord.  The others are taken to the mainland.  The nobleman turns out to be the lost Lord Bern and he apologizes.  Bern swears his loyalty to the true King and they devise a plan.  The next day they storm Governor Gumpas’s castle.  Caspian demands to know why the Lone Islands have allowed slavery to flourish and why they are behind in their tribute (payments to Narnia).  Gumpas shrugs and Caspian dethrones him and places Lord Bern in control of the islands.  There is a feast and a nighttime celebration.  The Dawn Treader is stocked and repaired for the journey ahead.

The ship moves east and is blasted by a storm.  The tempest lasts for two weeks.  The mast is severed and they are stranded underneath the ceaseless sunlight.  Their rations and water supply dwindles.  Reepicheep catches Eustace sneaking into them during the night.  The mouse admonishes the boy and Eustace’s contempt grows.  Land materializes and everyone surveys the new island.  Eustace gets lost and witnesses a dragon crawl out of a cave.  The dragon dies and he enters the cavern.  He discovers treasure, tries on a golden bracelet and falls asleep on the loot.

Morning comes and Eustace has morphed into a dragon.  He panics and flies back to his friends.  He cannot speak, but manages to use dragon sign language to convince his compatriots that he is in fact their crabby cousin.  Dragon life is abysmal and the bracelet is still fastened around his arm.  Caspian recognizes Lord Octesian’s crest on the bracelet and deduces that he must have died on the island.  Time passes and Eustace the dragon is humbled.  He helps out the gang and Aslan restores his original form.

Eustace has turned into a nicer person.  The whole dragon thing put life into perspective for the young lad.  The voyage sails on.  Water, wind and momentum push the crew forward.  A massive sea serpent almost destroys the boat.  They escape and find a rocky island with a giant golden statue of a man.  It is hidden beneath a stream that turns whatever it touches into gold.  They figure it is one of the Lords and name the island Deathwater.

The island hopping continues.  The next one is silent and mysterious.  A group of invisible people hold them hostage.  They explain their plight and tell them that only a girl can reverse their curse.  Lucy accepts the challenge.  Her objective is to read a incantation from the resident magician’s spell book.  She finds the spellcaster’s house and Aslan introduces Lucy to Coriakin.  The old magician reverses the curse and tells her all about the Dufflepuds (Duffers) that hired her.  The crew eats with Coriakin and learns that the golden statue was Lord Restimar.

The Dawn Treader floats further east and darkness looms over the aquascape.  Reepicheep rallies the troops and they push on and enter the Island Where Dreams Come True.  A frightened man with white hair is rescued.  He is elated and clarifies that he his Lord Rhoop.  Rhoop, Rhoop, Horray!  More sailing and more talking happens before they reach the Island of the Star.

Lord Mavramorn, Argoz and Revilian are asleep in stone chairs around a great feast.  Their hair is overgrown and the adventurers are cautious to approach.  The majority returns to the ship, but Reepicheep, Caspian and the children remain.  A woman appears and explains that the food replenishes each day.  It was a gift from Aslan for all travelers that have made it this far.  The Lords were enchanted during an inter-lord argument.  She says the food is safe and everyone eats.

The woman’s father Ramandu appears and supplies their final task.  In order to save the Lords, they need to sail to the World’s End and leave a crewmember to never return.  Reepicheep is excited and the Dawn Treader pushes towards the end.  They encounter merfolk and reach shallow water.  The ship can no longer continue.  Caspian lowers a smaller boat and decides he will be the one to stay behind.  Aslan rejects the notion and lets him know he has King stuff to do.  Caspian pouts and Edmund, Eustace, Lucy and Reepicheep progress.

The end is reached and they meet a wall of water that touches the sky.  Reepicheep enters the waterfall and disappears.  With the condition met, the Lord’s enchantment is lifted.  The kids find a lamb and it transforms into Aslan.  He sends them home through a door in the sky.  The adventure is completed and the bond between the three family members is solidified.