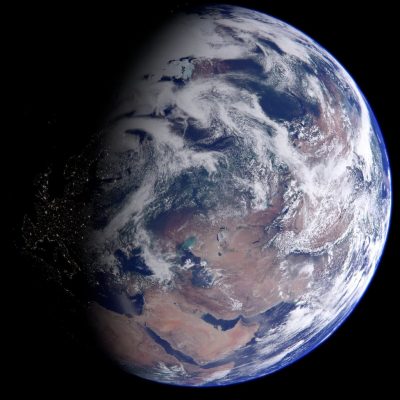 Earth is known as the Blue Planet.  The planet is not depressed.  The nickname is due to the amount of water that blankets the surface. Seventy percent of it is covered with the blue stuff. The rest is land.  It’s the third rock from the Sun.  Mercury and Venus are closer.  Earth’s atmosphere is filled with oxygen and supports human life.  There are close to eight billion humans.  Animals and fish thrive too.

The written stylization of “Earth” oscillates between a capital “E” and a lowercase one.  The latter (earth) is the oldest and most common, but both are accepted in modern English.  The name originated from the Old English noun eorðe.  It was used to translate the Greek word for soil and the Latin word for land (terra).  Tera is often used in science fiction writing.  The term terraform (alter an environment so it can support life) and terrestrial (inhabitants of Earth) are examples.

The Earth is the shape of a sphere.  The equator is a little bigger and the poles are smaller than the rest of the planet.  This is due to its rotation.  The diameter of the equator is twenty-seven miles greater than the vertical diameter that runs between the poles.  The lowest point is the Mariana Trench (almost 36,000 feet below sea level) and the highest is Mount Everest  (29,000+ feet above).

The structure of the planet is separated by the inner core, outer core, lower mantle, upper mantle and the crust.  The inner core is a solid globe.  It spans seven hundred and sixty miles wide and fills twenty percent of Earth’s radius.  There are no samples, but it is thought to be made of a nickel and iron-based alloy.  The internal temperature is an estimated 9,800 degrees Fahrenheit.  The surface of the Sun has a similar temperature.  The outer core is twice as thick as the inner.  It is liquid based and made of nickel and iron.  The mantle is directly above.

Two parts (upper and lower) build the mantle.  Silicate rocks flow within it.  They are rich in magnesium and iron.  The mantle is solid, but the material shifts over time.  The lower mantle is more free-forming than the upper.  Increased pressure causes this phenomenon.  The combined parts are close to seventy percent of the Earth’s mass and eighty-five percent of its volume.  Temperatures vary within and peak at 7,230 degrees Fahrenheit in the lowest realm.  The heat under the crust is near 400 degrees.

If the Earth’s crust was a pizza, it would be thin crust.  It is under one percent of the planet’s volume.  There are two types of crust found on Pizzeria Earth’s menu.  They are called Continental and Oceanic crust or CC and OC if you are ordering online.  Dense mafic (basalt, scoria, diabase and gabbro) rocks make up the six-mile-thick Oceanic crust.  Lighter felsic (granite, pumice and obsidian) rocks build the thirty-mile-thick Continental one.  The temperature increases around fifty-five degrees every kilometer you travel south.  Be careful to not burn your tongue.  It is best to let each slice cool off on a plate.

There are seven major tectonic plates (South American, Antarctic, Indo-Australian, North American, Eurasian, African and Pacific Plate) that cover the globe.  They are slow moving and interact at their boundaries.  When two plates come together it is a convergent boundary.  Divergent boundaries are when the plates pull apart.  If they pass each other laterally, it is considered a transform boundary.  These interactions are what cause volcanoes to erupt and earthquakes.  They also form the trenches in the oceans and the mountains on the land.

Humans landed on the Moon in 1969.  Neil Armstrong was the first to step on it.  The spaceflight was titled Apollo 11.  The Moon is Earth’s natural satellite.  It is the largest in the Solar System.  The diameter is a fourth of the Earth’s.   The formation (giant-impact hypothesis) is thought to be from an impact collision 4.5 billion years ago.  The Moon’s gravitational attraction with Earth causes tides.  Their romance moves water.

The profusion of water found on Earth is its defining characteristic.  The hydrosphere refers to the oceans, but scientifically contains all other bodies of water (lakes, rivers, underground sources etc.).  The oceans stretch close to one hundred and forty million square miles.  Two and a half percent of the water is fresh.  The remaining ninety-seven and a half is saline or salt water.  The glaciers and ice caps hold over two thirds of the world’s fresh water.  The salt water is due to volcanic activity.

Ecosystems are active with life.  Earth has several of these communities that together form the biosphere.  Biomes segregate similar animals and plants within the sphere.  They are larger than habitats and can stretch over multiple continents.  Every organism has a specific role and partakes in nutrient cycling.  There are natural resources that support the lifecycle too.  Humankind’s challenge is to not exhaust the natural resources before Mother Nature can replenish them.  It is important to stay on Mother’s good side.  Nobody in the biosphere likes an early bedtime.