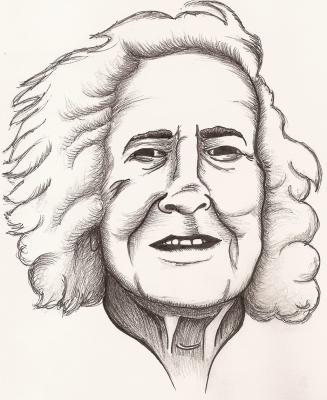 Pauline Baynes was an artist and illustrator.  Her middle name is Diana and her work was featured in hundreds of novels.  She was born in Hove, East Sussex, England on September 9, 1922.  Her parents were Frederick and Jessie Baynes.  Angela was her older sister.  The family moved to India when she was an infant and returned to England when she was five.  Papa Baynes remained in India where he worked as a district official for the British government.

Pauline was first educated at a convent school.  The teachers (nuns) mocked her artistic inclinations.  She transferred to a private all girls boarding school (Beaufort School) when she was nine.  Baynes joined her sister at Farnham School of Art at age fifteen.  The school is now known as the University for the Creative Arts.  She turned nineteen and was accepted into the famous Slade School of Fine Art.  No degree was earned and she was swept into the pressures of social life.  However, her talent was recognized and her work was exhibited at the Royal Academy of Arts (1939).

Angela and Pauline enlisted in the Women’s Voluntary Service (WVS) during World War II (1940).  They created models that the Camouflage Development Training Center used for education.  They both created maps for the Royal Navy in 1942.  Bayne’s experience was later utilized when she was hired to be the cartographer for J.R.R. Tolkien’s Middle-earth and C.S. Lewis’s Narnia.

Baynes taught at her former boarding school (Beaufort) in 1948.  She pivoted and went to work on a fantasy novel titled Victoria and the Golden Bird.  It was about a young girl and her supernatural trips in distant lands.  Pauline searched for a publisher.  She made contact with Allen & Unwin to make her pitch.  J.R.R. Tolkien offered his own novella (Farmer Giles of Ham) to the publishing house around the same time.  He was not satisfied with the artwork they commissioned.  Allen & Unwin’s art director reached out to Pauline Baynes to replace the illustrations.  Tolkien was impressed and the drawings were a perfect fit.

The art for Farmer Giles of Ham solidified Pauline’s career as an illustrator.  Tolkien wanted her to do the initial artwork for The Lord of the Rings and The Silmarillion, but her style conflicted with the overall tone of the books.  They linked back up in 1961.  Tolkien completed an anthology of shorter work called The Adventures of Tom Bombadil.  Baynes supplied the art.  Soon after, Puffin Books used one of her paintings for the cover of the paperback of The Hobbit.  It was well received.  Three years passed and Allen & Unwin commissioned Pauline to design the slipcase of a new edition of The Lord of the Rings.  She had never read the famous tales, but Angela was a fan and provided preliminary art.  She evolved her sister’s work and what was released became one of her biggest successes.

The final fiction Tolkien wrote was the Smith of Wootton Major.  Pauline Baynes produced the alternative cover in 1967.  She composed a map of Middle-earth in 1970.  She leaned on a group of military cartographers for assistance and Allen & Unwin released it.  In 1971, a second map for The Hobbit. There and Back Again: a Map of Bilbo’s Journey Through Eriador and Rhovanion was unveiled.  Her last Tolkien poster was for Bilbo’s Last Song and it was distributed a year after his death in 1974.

The road with Tolkien diverged as soon as it started.  Pauline Baynes travelled down a path that was equally venerated.  Her partner on the trail was C.S. Lewis.  The Farmer Giles of Ham drawings were famous and a close friend of Lewis introduced her to him.  She was chosen to illustrate Narnia.  Her pieces for The Lion, The Witch and the Wardrobe were published in 1950.  C.S. was content with her vision and Baynes illustrated all of the other books.  She opted out of royalties and took a flat fee.  Several other editions featured updated art over the years and provide the basis of her legacy.

Pauline married Friedrich Otto Gasch on March 18, 1961.  He was German and they settled in England.  Their residence was in Rock Barn Cottage, Heath Hill, Dockenfield.  They had one son who passed away at birth.  Her husband passed on October 28, 1988.  He was sixty-nine.  Two years after her husband’s death, his daughter from another marriage reached out to Baynes and they formed a wonderful bond.  The new relationship allowed her to enjoy the luxuries of old age.

She worked until her death from heart disease on August 1, 2008.  Pauline Baynes was eight-five years old.  Her art has been archived twice.  Williams College and the University of Oregon carried out the task.  Modern editions of Lewis’s and Tolkien’s books still feature her original pieces.

“Believe what you like, but don’t believe everything you read without questioning it.”