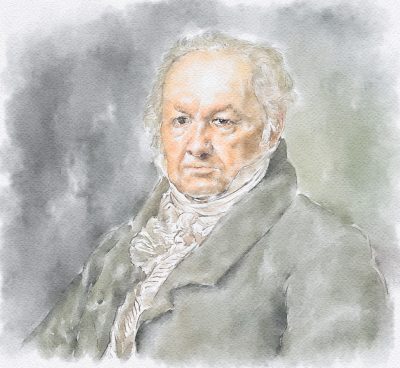 Francisco Goya was a Spanish painter.  His full name is Francisco José de Goya y Lucientes.  He was born on March 30, 1746 in Fuendetodos, Aragon, Spain.  His parents were Gracia de Lucientes y Salvador and José Benito de Goya y Franque.  Goya was the fourth child and he had five other siblings.  There are no historical records of Francisco Goya’s early school records, but it is speculated that he attended Escuelas Pías de San Antón.

Goya worked with the artist José Luzán when he was fourteen.  He moved to Madrid four years later and studied with the painter Anton Raphael Mengs.  Their relationship was tumultuous.  In the mid 1760’s, Francisco submitted his art to the Real Academia de Bellas Artes de San Fernando, but was not accepted.  He moved to Rome, Italy sometime after.  It is inconclusive what his motive and occupation were.

Two paintings (Sacrifice to Pan (1771) and Sacrifice to Vesta (1771)) were crafted during his time in Rome.  He won a competition hosted by the City of Parma in 1771.  His skills increased and he was commissioned to paint various frescoes in several churches.  Francisco Goya interned under the Spanish artist Francisco Bayeu y Subías.  Bayeu nurtured Goya’s talent and they became friends.  Goya married his master’s sister Josefa Bayeu y Subías on July 25, 1773.

The Royal Tapestry Factory hired Goya in the late 1770’s.  He designed tapestry cartoons for the factory over a five-year period.  More than forty patterns were distributed and purchased by Spanish monarchs for their personal residences.  The success landed him a royal commission for a set of engravings.  The pay was below average, but the exposure helped cultivate his fame.  The work was taxing and Francisco contracted an illness.  He did not despair and used his misfortune to alternate his outlook on painting and make it more intimate.

The 1st Count of Floridablanca, José Moñino y Redondo, hired Francisco Goya to paint his portrait in 1783.  He befriended King Charles III’s half-brother Luis soon after.  Their friendship allowed Goya access to the royal family’s inner circle.  Goya spent a few years painting their portraits and was put on salary as a painter for King Charles III.  He was added as a member of the Royal Academy of Fine Art during this time.

In 1789, he was promoted to court painter by Charles IV.  Several nobles were captured by Goya’s skilled brush.  The dukes and duchesses were on theoretical speed dial.  The Spanish Prime Minister Manuel Godoy called Goya in 1801.  Francisco produced the suggestive and infamous paining Portrait of Manuel Godoy during the same year.  Godoy’s career ended in shambles and he was exiled to Paris.  He still praised Goya until his dying days.

Goya lost his hearing in 1793.  The cause was an undiagnosed illness.  His deafness shifted his career again and he slipped into reclusiveness and paranoia.  Time drifted on and he created Los caprichos, a set of eighty aquatinted etchings.  The work in the new medium was an experiment and a critique on Spanish society.  Each image had a description to highlight the picture.  The series is well regarded today, but was quickly withdrawn from circulation due to the Spanish Inquisition.

The French showed up and started the Peninsular War of 1808-1814.  Goya stayed neutral and painted for French sympathizers.  His wife Josefa died in 1812.  He was in the process of working on The Third of May 1808 (1814) and The Disasters of War (1820).  When Ferdinand VII was reinstated in 1814, he hid his involvement with the French.  Ferdinand and Francisco did not see eye to eye, but the artist completed several beautiful portraits of the king.  None were commissioned by his majesty.

Fourteen paintings were made between 1819 and 1823 at Francisco Goya’s villa named Quinta del Sordo (Deaf Man’s Villa).  They are his magnum opus and known as the Black Paintings.  The house was named after the previous owner who was also deaf.  Goya was overtaken by hysteria and his own mortality.  He composed each masterpiece directly on the wall and left them unnamed.  His friend and artist Antonio Brugada cataloged them in 1828 (Procession of the Holy Office, The Dog, Saturn Devouring His Son, La Leocadia, Fantastic Vision, Atropos (The Fates), Two Old Men, Two Old Men Eating Soup, Fight with Cudgels, Witches’ Sabbath, Men Reading, Judith and Holofernes, A Pilgrimage to San Isidro and Women Laughing).  The collection was made with a limited palate of brown, grey, gold and of course…black.

The Black Paintings were transferred to canvas in 1874.  The paint was originally cast into wallpaper and it was carefully removed.  The painter Salvador Martínez Cubells supervised the ordeal.  The original goal was to sell them at the Paris World Fair (1878), but they were donated and displayed at the Museo del Prado in Madrid instead.

Leocadia Zorrilla was Goya’s maid and cared for him after his wife’s death.  She was a distant relative and he was thirty-five years her senior.  They lived together in Quinta del Sordo.  They left in 1824 for Bordeaux where Goya retired.  The artist suffered from a stroke that paralyzed his right side.  His eyesight suffered and he died on April 16, 1828 at the age of eighty-two.  His final resting place is the Royal Chapel of St. Anthony of La Florida in Spain.  His skull is missing from his tomb.  His master craft is missed by the public.