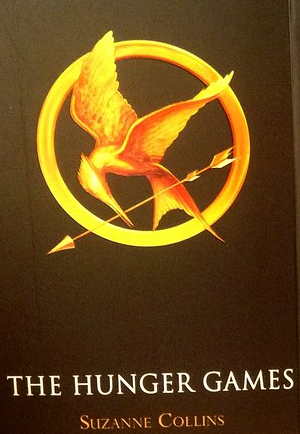 The Hunger Games was written by Suzanne Collins.  Scholastic Press published the novel in the fall of 2008.  It received critical acclaim and was honored by the critics.  The Hunger Games sold close to a million copies by 2010.  The book has been translated in over twenty-five languages.  The story follows Katniss Everdeen and her plight during a brutal event that takes place in the post-apocalyptic country Panem.

The tale beings on the day of the reaping.  Katniss wakes up and gets dressed.  She heads out into the Seam in District 12 to go hunting.  She pops under the fence on the border of the district with her bow.  She runs into her buddy Gale in the woods and they talk about running away and the reaping.  A child’s name is entered one time when they turn twelve years old and scales up each year until they turn eighteen.  There is the option to add your name more times in exchange for food.

Katniss’s name has twenty entries and Gale’s has forty-two.  Time passes and the history of the Hunger Games is recited.  The reaping drawing begins and the District 12 tributes are selected.  Primrose Everdeen is chosen as the female participant.  Katniss is shocked when she hears her sister’s name and offers to take her place.  The swap is allowed and the crowd stays silent.  The male tribute is drawn.  His name is Peeta Mellark.  Peeta frowns whenever he sees a fur coat.

The tributes are taken to the Justice Building and say their goodbyes.  Katniss is handed a golden pin with a bird in the middle of it.  She is instructed to wear it at all times.  The kids head to a train station and begin their ride to the Capitol.  Katniss tells an exhilarating story of the history of District 12 and realizes that the bird on her pin is a mocking jay.  Peeta narrates some hilarious jokes and they meet their intoxicated mentor Haymitch Abernathy.  Peeta says hey, mitch.

Haymitch pukes and slips in the vomit.  Peeta cleans him up and everyone goes to bed.  Morning arrives and Haymitch is back on the booze.  There is a scuffle and he promises to help them if they do not interfere with his vices.  The train pulls into the Capitol and ostentatious rich people are everywhere.  The stylists appear and prepare the tributes for the Hunger Games.  The kids are revealed and Katniss and Peeta win over the crowd.

Katniss relaxes at the Training Center and is provided a gigantic room and foreign luxuries.  She speaks to Peeta on the roof and they go to sleep.  Training begins the next day.  The tributes practice for three days together and end with a private session in front of the Gamemakers.  Peeta is good with camouflage and Katniss fires an arrow into an apple inside a roasted pig’s mouth.  The Gamemakers present their scores and Katniss scores an eleven.  Peeta gets an eight.  The max score is a twelve. The grades are important in order to secure survival gifts from sponsors.

The tributes have interviews and Katniss does well.  Peeta reveals that he has a crush on her during his.  This upsets the protagonist, but she apologizes.  They go to bed.  The sun rises and they part ways with Haymitch.  The tributes put on their pins and board a hovercraft.  A tracker is injected and they enter the arena.  Sixty seconds passes and everyone is released.

Katniss grabs a tarp and fights over an orange backpack.  Her opponent dies from a knife and she runs.  Another blade lodges into her backpack.  She crests into the woods safely.  Time passes and eleven cannon shots ring out.  Thirteen tributes remain.  Darkness falls and she makes camp up in a tree.  Morning breaks and a girl is slaughtered nearby.  A group of tributes are hunting in a pack.  One of them is Peeta.

The heroine cooks a rabbit and looks for water.  She collapses and crawls to a pond.  Katniss rehydrates and falls asleep in another tree.  A fire rolls in and she wakes up.  The blaze injures her and she tends to her burns.  The tribute pack walks by and she calls down to them from the tree.  They cannot reach her.  The bad guys lurk below.

After a nap, the sun goes down and she notices another girl in a neighboring tree.  She is passive and points to a tracker jacker nest above Katniss.  Katniss drops the nest on her foes the following day.  One of the opponents dies and she grabs a bow.  Peeta appears and tells her to run away.  A tracker jacker stings her and she starts to hallucinate when she runs away.  Katniss puts distance between her enemies, but falls into a hole.  Everything goes black.

Katniss wakes up and some days have passed.  Time flies during the Hunger Games.  She wonders why Peeta saved her life.  The girl from the tree links up with Katniss and they review their equipment.  Her name is Rue.  They go to sleep and a cannon echo acts as their alarm clock.  The duo share pleasantries and spy on the tribute pack’s camp.  Peeta was stabbed and is longer partnered with them.

The pair move towards the camp and Katniss triggers a trap that detonates the pack’s supplies.  Katniss is blown away and someone dies.  She loses Rue and finds her later.  Rue is stabbed and Katniss ends her killer’s life.  The ordeal depresses Katniss and she covers her friend’s body in flowers.  A trumpet blares and the Gamemakers announce that a rule change has been made.  Tributes from the same district can win the Hunger Games if they are the last two remaining.

Katniss searches for Peeta and finds him injured.  She moves him into a cave for safety.  She kisses him to play to the crowd.  Another announcement says that there will be a feast with backpacks containing vital supplies.  Katniss wants to retrieve it, but Peeta rejects.  Haymitch sends her sleep syrup to knock out Peeta.  She uses it and heads to the feast.  A knife injures her and she is pinned down.  A boy from Rue’s district saves her and she goes back to save Peeta.

The lovebirds sleep and recover and gather their bearings.  Food is hard to come by, so they play up their romance and receive nourishment from Haymitch.  Time passes and they gather food.  A tribute steals some poisonous nightlock berries that Peeta collected. Three remain.

The climax arrives and some mutated contestants attack the last tributes.  Peeta and Katniss survive and are the winners of the Hunger Games.  The pair let out a sigh of relief and an announcement says the new rule was revoked and they have to fight to the death.  The friends decide to commit suicide with the berries and place the fruit in their mouth.  A follow-up announcement declares them the winners.  They spit the berries out.  A hovercraft comes and the Capitol cleans up the champions.

Haymitch congratulates Katniss at the victory ceremony.  He says their lives are in danger due to their defiant act and her best defense is to play up her love for Peeta.  The conclusion ends and everyone goes to bed.  An interview happens the following day.  Katniss reveals that her actions were a desperation to save Peeta.  Haymitch approves, but she is unsure about her feelings and the future seems nebulous.  The Hunger Games ends.

2 comments on “The Hunger Games”