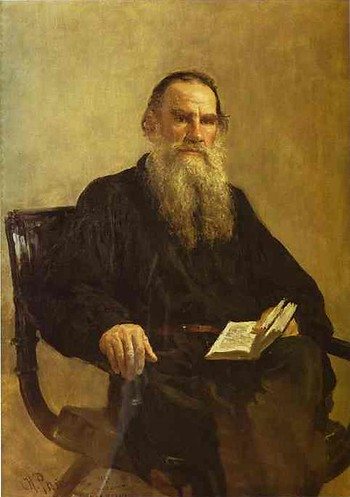 Leo Tolstoy’s full name is Lev Nikolayevich Tolstoy (Лев Николаевич Толстой).  He was born on September 9, 1828 in Yasnaya Polyana, Tula Governorate, Russian Empire at his family’s estate.  His zodiac sign was Virgo and not Leo.  Tolstoy is considered one of the most established authors in history and was nominated for the Nobel Prize in Literature and the Nobel Peace Prize on multiple occasions.  He never won either one and the void in his accolades has generated much controversy.

The Tolstoy estate Yasnaya Polyana is located about one hundred twenty miles south of Moscow.  Leo was the fourth born out of his five siblings.  Papa T was Count Nikolai Ilyich Tolstoy and his mother was Princess Mariya Tolstaya.  Both parents passed away by the time Leo was nine.  The kids were raised by relatives.  Leo studied law at Kazan Federal University and dropped out before finishing his degree.

The author returned home and split his time between Tula, Saint Petersburg and Moscow.  He lived in luxury and began to write.  His first book Childhood was published in 1852.  The story was a fictional account of his own youth.  Leo incurred some gambling debts soon after and joined the army with his older brother.  He served in the Crimean War and was at the eleven-month siege of Sevastopol between 1854 and 1855.  Tolstoy was promoted to lieutenant and was scarred by the carnage.  He departed from the army after the war.

Leo Tolstoy traveled around Europe in 1857 and again in 1860.  His experiences with society and the war converted him from a boy of privileged society into a passive and spiritual anarchist man.  Sometime in Europe he witnessed a public execution in Paris that was the tipping point.  He read a German translated copy of the Tirukkuṟaḷ (the Kural) that bolstered his views.  This led to adopting the teachings of Mahatma Gandi.  The pair shared a correspondence.

Victor Hugo and Tolstoy linked in 1861.  The two helped develop each other’s craft.  Leo read an early copy of Hugo’s Les Misérables.  The lurid depictions of battle permeated Tolstoy’s War and Peace years later.  The French anarchist Pierre-Joseph Proudhon was exiled and living in Brussels when he met Leo.  The two thrived together and Proudhon’s French publication La Guerre et la Paix or War and Peace was used as the eventual title of Tolstoy’s Magnum opus.

The writer returned to Yasnaya Polyana.  He founded thirteen schools for Russian peasants that were released from serfdom by the Emancipation Reform of 1861.  He wrote an essay of the school’s purpose titled The School at Yasnaya Polyana a year later.  The experiment was ephemeral and the schools were dissolved by the Tsarist secret police.  The project was far from a failure and the model example of democratic education.  Tolstoy’s project laid the groundwork for Alexander Sutherland Neill’s Summerhill School that was founded in 1921.  Summerhill was constructed with the belief that the school should be created to fit the students.  The goal was to foster learning and not mold the children to fit the structure.

Leo followed Childhood with Boyhood in 1854 and Youth in 1857.  He expressed his displeasure with the writing later in life, long after his spiritual awakening.  The Cossacks was started in 1853 and rewritten in 1857 after Tolstoy reread Homer’s Iliad (1581).   It was finished in 1862 and published a year later to help repay a gambling debt.  The story details Cossack life through the eyes of a Russian aristocrat in love with a Cossack woman.

War and Peace landed in 1869.  Over five hundred eighty characters clash amongst the pages.  The book chronicles the French invasion of the Russian empire and the reactions and interactions of five Russian aristocratic families.  Today it is lauded as a classic and placed Tolstoy in the literature pantheon.  Anna Karenina followed and was printed in 1878. The complicated eight-part novel was called his “first true novel” by the author himself.  It was critically received with the same praise as War and Peace.

The novella The Death of Ivan Ilyich was published in 1886 and an instant masterpiece.  Stories of My Dogs (1888) contained eight chapters and follows the adventures of Leo’s pets Milton and Bulka.  The Devil was penned in 1889 and published posthumously in 1911.  The chapters cover the costs of sexual emotion.  Resurrection was Tolstoy’s last novel.  It was released in 1899 and in English in 1900.

Leo married the daughter of a court physician named Sophia Andreevna Behrs on September 23, 1862.  She was younger than the author.  They had thirteen children.  Eight of them survived childhood.  The marriage was marked with passion and intense emotion.  Later on, it deteriorated as Tolstoy’s views became more radical.  Leo passed away on November 20, 1910 at the age of eighty-two.  He died of pneumonia at Astapovo railway station during a journey south.  The last hours of his life were spent preaching love and passivism to train’s passengers.  His works are cherished by millions of readers today.

“Seize the moments of happiness, love and be loved! That is the only reality in the world, all else is folly.”