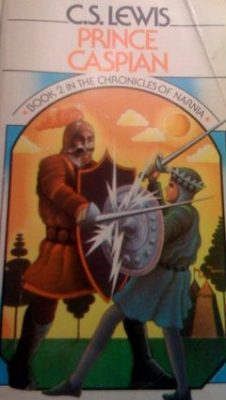 Prince Caspian was initially published as Prince Caspian: The Return to Narnia and is the second book in C.S. Lewis’s The Chronicles of Narnia series.  It was released on October 15, 1951, a year after The Lion, the Witch and the Wardrobe.  The titled was shortened to mask the inventible return of the Pevensie children (Edmund, Lucy, Peter and Susan) to the fantasy land.  Too much was revealed after the colon.  Punctuation and jokes aside, Prince Caspian is now listed as the fourth volume in the contemporary chronology of the narrative.

A year passed after Lucy entered the wardrobe.  She ruled over Narnia with her siblings.  In the present, everyone is waiting at a British train station.  They are preparing to voyage to school.  A pain courses through Lucy’s chest.  Edmund feels it too.  He screams.  They all scream.  No one screams for ice cream.  A mysterious energy punctures them and the train station is gone.  A forest appears and the children grasp for air.  They are back in Narnia.

The Pevensie crew move on and follow a stream to search for water.  They drink and eat sandwiches that were packed for their academic journey.  It’s not as delicious as ice cream, but food is food and some of the gang are watching their figure.  Days pass and they continue to scavenge for nourishment.  Their mission takes them to an archway and the remains of an apple orchard.  They realize it is the ruins of their old castle (Cair Paravel) and spend the night in comfort.  During their year long absence, 1300 Narnian years have passed by.

The kids explore their former home and unearth the abandoned treasure room.  All of Father Christmas’s gifts are located, except Susan’s horn.  They gather Lucy’s dagger and magic potion, Peter’s shield and sword and Susan’s arrows and bow before heading out.  Soldiers are spotted on a boat when they are moving down the coastline.  The soldiers are about to throw a struggling prisoner overboard.  Susan fires arrows at them and they flee by jumping into the water.  The kids commandeer the boat and save the captive.  He is a dwarf named Trumpkin and has pledged his allegiance to King Caspian.  Trumpkin says that Narnia is now controlled by an outside people called the Telmarines.  Prince Caspian is a Telmarine and the rightful heir.  The enchanted creatures and talking animals from the children’s reign had disappeared and were thought to be a myth in the present day.

[…] Prince Caspian was a boy when his father died.  His uncle Miraz claimed the throne instead.  Caspian’s nurse told him wonderful tales of Old Narnia.  King Miraz was displeased and banished her.  He forbade the discussion of the topic.  Little “C” was sad.  His tutor, Doctor Cornelius consoled him.  Cornelius M.D. explained that he was a half-dwarf and continued to teach Prince Caspian the history of Old Narnia in secret.  Their clandestine sessions continued and the boy promised to find the Old Narnians when he is king.  His Aunt gave birth.

King Miraz now had an heir.  Cornelius warned Caspian that his life was in grave danger.  Miraz had murdered his father and will want to sever his bloodline so his own kin can rule.  The doctor promised his devotion and gave him Queen Susan’s mythical horn.  He helped him escape the palace and pointed him to the south.  Caspian progressed through the woods on horseback.  A storm frightened the horse and he is knocked unconscious.

Voices echoed inside a cave.  Two dwarfs (Trumpkin and Nikabrik) and a badger named Trufflehunter were deep in discussion.  They uncovered Prince Caspian’s true identity and were unsure if they should let him live.  The Old Narnians spared his life.  He was introduced to various creatures from the past.  Trufflehunter mentioned his belief in Aslan.  Glenstorm the Centaur formed a council of war.

The council opened session and Doctor Cornelius arrived.  He warned them that King Miraz had gathered an army.  Their objective was to hunt the prince.  Everyone departed towards Aslan’s How.  The King’s forces confronted them and the council is outmatched.  Caspian blew the horn and scouts were sent to ancient locations where help could appear.  Trumpkin was assigned Cair Paravel. […]

The Pevensies realize that the horn broke the physics of England and teleported them to Narnia.  Trumpkin is thankful, but not impressed.  They were just children.  The former royalty disagreed and proved their merit through a sequence of challenges.  Trumpkin is humbled and they suit up in fabulous armor.  The voyage back to Aslan’s How begins.

The expedition is cumbersome and Trumpkin kills a bear.  Aslan uses Lucy as a conduit and they arrive.  He sends the boys forward and Susan and Lucy hang back with the Lion.  He roars and does Aslan things.  The forest awakens and two gods (Silenus and Bacchus) are summoned.  Followers are recruited and their numbers strengthen.

The boys enter a skirmish and the High King Peter assumes command of the Caspian infantry.  Big brain Pete realizes the odds of head on combat and challenges King Miraz to a duel.  He coaxes him into accepting by taunting him with his youth.  The clash is even.  The swordsmen are exhausted and Miraz trips.  Peter waits for him to rise, but the King’s own Lord (Glozelle) betrays him and stabs him from behind.  Full scale battle erupts.

Aslan arrives in the heat of the onslaught with backup.  The good guys win.  He crowns Prince Caspian as king.  Everyone recuperates and celebrates.  A great feast and dancing are the natural follow-up.  The next morning it is revealed that the Telmarines were pirates.  They entered Narnia through a portal in a cave when they were lost at sea.  Aslan offers them the option to return home.  The Lion constructs a new portal out of sticks in the form of a doorframe.  He leaves.  The kids are nostalgic, but understand that their work is done.  They say goodbye to their new friends and pass through the door.  The train station greets them on the other side.