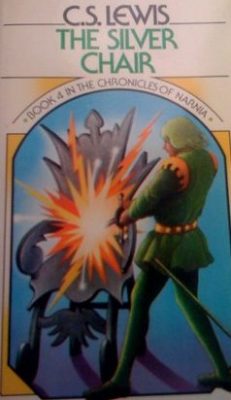 The Silver Chair is set decades after the events of The Voyage of the Dawn Treader.  It is the first journey into Narnia that does not include the Pevensie kids.  Eustace is the protagonist instead.  The book is the fourth Narnian story penned by C.S. Lewis.  The Silver Chair is the sixth volume in the present run of the novels.  1953 was the year it was first published.  Pauline Baynes was the illustrator.  The preferred reading environment for the classic is in a chair with decent posture and the beverage of your choice.  The chair can be made from any alloy or even something traditional like wood.

Eustace Scrubb is best friends with Jill Pole.  They are students at an alternative school named Experiment House.  The experiment is not going so well.  Bullying is a daily problem for them.  The back of the gym is their place of refuge.  One day, they are fleeing their adversaries and Eustace comforts Jill with tales from his adventure in Narnia.  The bullies close the gap and they call for Aslan to come to their aid.  The lion answers and transports them to his country.  The friends appear on the precipice of a seaside cliff.

Jill shows off and moves close to the edge.  She must not have heard the nursery rhyme about Jack and Jill and how their inertia increased as they went tumbling down that hill.  Sure, their current terrain was different, but the higher elevation was all the more reason to be cautious.  These thoughts must have been rushing into Eustace’s head when he hurries to stop her.  He fails and clumsy “E” topples over the cliff.  Aslan clocks in for overtime and blows a wind current to propel him to safety over the sea and into Narnia.

The lion admonishes Jill and lets her know her actions have increased the difficulty of the incoming task.  Her mission, if she chooses to accept it, is to rescue the kidnapped Prince Rilian.  The mission was actually not optional like Tom Cruise’s in Mission Impossible, but Aslan provides four signs to help her and Eustace as compensation for the obligation.  The first is that Eustace will meet an old friend when they enter Narnia.  If he greets the friend, the friend will help.  The next is that they must head north to the city of the ancient giants.  If the city is ruined, they need to follow the writing.  The final nugget is that the prince will ask them to do something in his (Aslan’s) name.  The call for help will be proof of his identity.

Jill digests the information and Aslan blows her to Eustace.  He is still peeved from earlier and they watch the elderly king’s ship depart out east.  An owl named Glimfeather appears after observing the strange air current that transported them.  He tells them that the old king was Caspian.  Jill tells Eustace about the task and the clues Aslan provided.  Eustace realizes they failed to utilize the first one when he did not recognize Caspian in his old age.  They are bummed that they will not receive his help.  The former prince was a pretty cool dude.

The Lord Regent Trumpkin provides them rooms at the castle and agrees to listen to their story the following day.  They go to bed.  Glimfeather wakes the kids up in the middle of the night.  He feared that Trumpkin would not help and takes them to a meeting of the owls.  The owls tell them about Prince Rilian’s history and how he journeyed to find the green serpent who murdered his mother.  He met a beautiful lady along the way and abandoned his quest.  He disappeared soon after.  The birds listen to the children and understand that they need to go north to Ettinsmoor where the giants are.  A frog creature named Puddleglum is enlisted to be their guide.  Puddleglum is glum, but he didn’t choose his name.  Mommaglum did and he is a realist, so he accepts his appointment.

The trio move north.  The weather is bad and the natural obstacles are worse.  They pass over a bridge and meet a knight in black armor and a beautiful woman in green.  She turns out to be the Lady of the Green Kirtle and suggests that they take a break and go to Harfang instead of Ettinsmoor.  Harfang is the city of gentle giants and there will be an Autumn Feast there.  The kids think it is a good idea.  The frog does not, but the children had the majority and they trot towards the feast.

Everyone arrives at the entrance of Harfang.  Jill tells the gatekeeper that the Lady of the Green Kirtle sent them.  They are led to a warm fire and Puddleglum gets drunk.  Everyone bathes and adorns luxurious garments.  They go to bed after a wonderful feast.  Jill has a dream about the ancient giant city and the phrase UNDER ME carved into stone.  She wakes up and they realize they failed to follow the second sign from Aslan.  They are batting at zero percent, but now they know that they need to look under the city.  Thirty-three percent is bad, but better than zero.

The friends and the frog leave with fresh motivation.  The decision is easy because the Harfang giants plan to eat them.  They confirmed their suspicions when they peeked at the giant’s cookbook and they were on the menu.  They escape through a crack in some ruined steps.  They get lost and descend into darkness.  A voice greets them and tells them they are going to meet the Queen of the Deep Realm.  Everyone boards a boat and crosses a lake.  They enter a quiet and bleak city filled with Earthmen.

The black night greets them.  They are glad to see a friendly face until he tells them that the Queen of the Deep Realm is the Lady of the Green Kirtle.  Eustace is still upset from the fresh betrayal.  Jill tells the knight about their mission to find Prince Rilian.  He has never heard of the Prince or Narnia.  He says that the Queen promised to make him king when they invade the Overland with the Earthman.  All he remembers is his life once he entered the Underland.  He drones on and on and reveals a final caveat about an evil spell.  The curse turns him into a serpent and he needs to be bound to The Silver Chair so he doesn’t harm anyone.

Time passes and the knight is confined to The Silver Chair.  He explains that during his torment he will try to persuade the children to let him go.  The kids are scared, but understand.  The torment begins.  The requests for release start.  Eustace and Jill are uncomfortable and honor his original wish to leave him alone.  The struggle goes on and the knight calls for Aslan himself.  The trio recognize the fourth sign and release him.  The knight grabs his sword and destroys The Silver Chair.  He reveals that he is Prince Rilian and thanks them.

The queen returns and is upset they freed her future husband.  She tries to hypnotize everyone, but Puddleglum breaks the spell.  She turns into a giant green serpent.  Prince Rilian realizes that she was the one who killed his mother.  He returns the favor with their help and leads them to the surface.  Mission possible.  Mission accomplished.

The victory party carries back up into Narnia and over to Cair Paravel.  King Caspian returns home and blesses his son.  He dies afterwards and Rilian is crowned the next King of Narnia.  Aslan arrives and praises Jill and Eustace.  He takes them back to his country and revives Caspian.  He sends them back to their school and they fight off the bullies. Capsian returns to Aslan. Rilian mourns his father and looks towards the future.  The Silver Chair ends.

0 comments on “The Silver Chair”