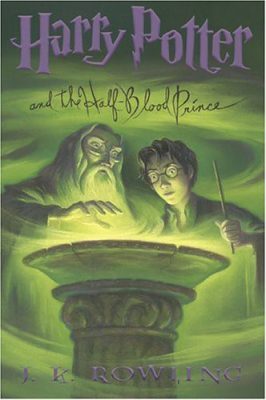 Harry Potter and the Half-Blood Prince resumes after the Order of the Phoenix.  J.K. Rowling details Harry’s sixth year at Hogwarts in her over six-hundred-page epic.  Rufus Scrimgeour is named the new Minister of Magic after Cornelius Fudge’s dismissal.  Narcissa (Draco’s mother) and Bellatrix appear cloaked near a river.  They exchange threats and move to Severus Snape’s home.  Bellatrix does not trust Snape.  He continues to stay near Dumbledore and has not killed Harry.  Snape appeases her angst and mentions he is working undercover.  He then snaps back and mocks her failure to end Potter during their last showdown at the ministry.  Bella shifts the blame to Narcissa’s husband Lucius.  Narcissa cries and tells Snape that Voldemort has assigned Draco a difficult task due to Lucius’s failure.  Snape decides to help and makes an Unbreakable Vow with her.  The conditions are to protect Draco and complete the task in the event of his failure.  If Snape ignores the vow, the result is instant death.

Dumbledore arrives at Harry’s relative’s house.  One of his hands is shriveled, but he does not reveal why.  Harry gathers his things and they Apparate (teleport) to Horace Slughorn’s house.  Dumbledore convinces him to teach at Hogwarts.  They Apparate again and arrive at the Burrow (Ron’s house).  The headmaster notifies Harry that he will be giving him private lessons and that he should keep the Invisibility Cloak with him at all times.  Dumbledore leaves and the students receive their O.W.L. scores.  Harry does well in everything but potions.

The gang goes to Diagon Alley to purchase school supplies and they spot Draco.  They hide under the cloak and follow him to Borgin and Burkes.  Draco shares words with the owner and everyone boards the Hogwarts Express.  Harry is convinced that Draco has become a Death Eater.  Potter snoops on Draco during the train ride.  Draco boasts about the mission Voldemort assigned him.  Harry is discovered, but hidden under the cloak.  Draco sends a blind curse towards his location and breaks his nose.  Harry is invisible and paralyzed.  The Auror Nymphadora Tonks arrives and escorts him to school.

Professor Slughorn is introduced as the new Professor of Potions during the Great Hall feast.  Snape is the Defense Against the Dark Arts teacher.  Harry recounts his experience with Draco to Ron.  He is concerned, but skeptical.  Hermione has a similar opinion.  Ron and Harry borrow Potions textbooks from Slughorn.  Harry’s copy is littered with notes and difficult to read.  Slughorn challenges the student to a contest. Whoever creates the best potion will win a vial of Felix Felicis (luck potion).  Harry follows the notes in the margins and wins the challenge.  The back cover of the textbook is inscribed with “This book is the Property of the Half-Blood Prince”.

Harry and Dumbledore begin their private sessions.  The goal is to teach Harry about Voldemort to better his chances for survival.  They dive into a memory with the Pensieve and discover the history of a black and gold ring that belonged to Voldemort.  Dumbledore tells Harry he located it and injured his hand.  Time passes.  Their next session explores the memory of Caractacus Burke (co-owner of Borgin and Burkes).  They jump into one of Dumbledore’s after.  They witness Dumbledore offering Voldemort a chance to study at Hogwarts and Harry sees into his troubled youth.

Ron learns that Hermione kissed Krum last year and they fight.  They both have feelings for each other.  Ron kisses Lavender Brown to make her jealous.  Harry develops his own feelings for Ginny.  He is conflicted, but receives his friend’s blessing.  Christmas brings in the New Year and Dumbledore hosts another meeting with Harry.  He tells H.P. that Voldemort was instantly sorted into Slytherin and was a model student that was praised by the Hogwarts staff.  He was a half-blood and a direct descendent of Salazar Slytherin.  They dip into the Pensieve and view the setup to a Voldemort murder and a discussion with Slughorn.  Voldemort asks him about Horcruxes (splitting your soul and hiding it in an object).  There is dissonance and Slughorn says he doesn’t know anything about them.  Dumbledore says the memory has been tampered with and implores Harry to extract the real version.

Slughorn refuses to answer Harry’s question about Horcruxes.  Dumbledore is frustrated and Harry promises to keep trying.  They shoot into the memory of a House Elf of Hepzibah Smith.  Smith shows Voldemort a golden cup and locket.  The locket is stained with Slytherin’s mark and the cup belonged to Helga Hufflepuff.  Hepzibah died a few days later and the locket and cup disappear.  Dumbledore talks more about Voldemort’s background.  Harry finds a spell in the margins of the Half-Blood Prince’s textbook (Sectumsempra).

Hagrid invites the crew to Aragog’s (giant spider from The Chamber of Secrets) funeral.  Harry invites Slughorn and slips him the Felix Felicis during the afterparty.  They discuss his parents and he obtains the suppressed memory.  Dumbledore is elated and they go to the Pensieve.  Slughorn explains the concept of a Horcrux to Voldemort.  He learns that the process hides a piece of your soul in an object and if you die, the soul lives on without a body.  Slughorn clarifies that the process is a violation of nature and can only happen through the act of murder or supreme evil.  Dumbledore tells Harry that no wizard has attempted multiple Horcruxes and that he believes Voldemort has made seven.  The way to destroy the Dark Lord is to destroy his Horcruxes.  The ring and diary were eliminated and five remain.  Dumbledore is close to finding another and invites Harry to help him destroy it when it is located.

The object is found hidden deep in a cave.  Before they leave, Dumbledore states that Harry needs to follow his orders.  The entrance is blocked and requires a blood offering to open.  Dumbledore slices his hand to open the passageway.  They proceed to a pool of water with a green glow in the middle.  They use magic to conjure a boat and sail to the center.  Bodies writhe underneath the water.  A green liquid inside a stone basin is the source of the glow.  Dumbledore summons a goblet.  He reminds Harry of the conditions of the trip and that he needs to force him to continue drinking the liquid. Dumbledore collapses during his fourth cup and Harry helps him until eight are swallowed.  They grab a locket out of the empty basin and the creatures in the water attack.  They escape by casting a fire spell and return to Hogwarts.

The Dark Mark is visible over the school.  The pair head to the Astronomy Tower and hear footsteps.  Harry hides under the Invisibility Cloak.  Dumbledore uses a freezing charm to lock Harry in place.  Draco appears and disarms Dumbledore.  He explains that Death Eaters have stormed the grounds of the castle.  He doesn’t have the gumption to kill him.  Four Death Eaters appear and command him to finish the task.  Snape appears and kills Dumbledore, honoring the Unbreakable Vow.

A battle ensues with the Death Eaters.  Harry confronts Snape and he unveils that he is the Half-Blood Prince.  He escapes with Draco and the other assailants.  They find Dumbledore’s body and Harry takes the locket.  It is a fake and has a note addressed to Voldemort and signed with the initials R. A. B.  Bill Weasley is injured in the battle and Dumbledore is buried.  Harry, Ron and Hermione decide to search for the remaining Horcruxes and to drop out of Hogwarts.  The friends contemplate the difficult road ahead and the Half-Blood Prince is concluded.

4 comments on “Harry Potter and the Half-Blood Prince”