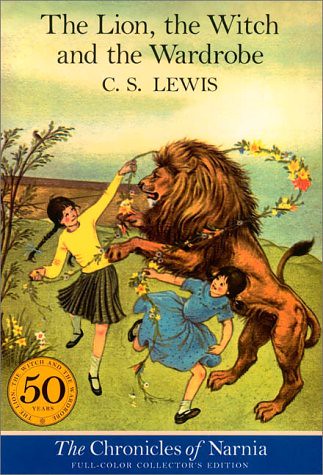 The Lion, the Witch and the Wardrobe begins with the children moving to the countryside in order to escape the bombings of World War II.  They take residence in Professor Diggory Kirke’s large estate.  The house is spellbinding and the kids decide to explore its numerous corridors.  They discover a baren room that contains a giant wardrobe.  Susan, Edmund and Peter leave and Lucy remains behind.  She is entranced with the closet and looks inside.  The internal physics are unnatural and oversized.  Lucy spots a snowy wood in the background and decides to explore further.

She runs into a faun (half man and half goat) carrying an umbrella and some packages.  He is startled and introduces himself as Tumnus and explains that they are in Narnia.  The faun asks if she is a Daughter of Eve and invites her over for tea.  Tumnus lays out a fantastic spread and entertains Lucy with music from his flute.  He has a mental breakdown and reveals that he is a spy for the White Witch and that she cannot return home.  He clarifies that the Witch is the overlord of Narnia and has cursed the land into perpetual state of winter.  Lucy comforts Big “T” and he decides to let her go.  Tumnus takes Lucy to a lamppost on the border between their two worlds and she proceeds to the mansion.

Lucy finds her siblings and assures them she is fine.  They are confused and claim she was away for a few seconds.  She tells them about Narnia and takes them to the wardrobe.  It is a normal closet now and no one believes her.  Her brothers and sisters tease her and time passes.  One day, the children are playing a game of hide and seek and Lucy takes cover in the wardrobe.  She slips back into Narnia.  Edmund spots her going inside and decides to follow.  He finds himself in the strange world.  Narnia renders him catatonic and puzzled.  There are no signs of Lucy.

Edmund runs into a pale woman in fur.  She has a wand and is wearing a crown.  She informs him that she is the Queen of Narnia and he should show respect.  Her tone changes when she learns that he is human.  She invites him on her sleigh pulled by white reindeer.  She conjures a warm drink and a box of Turkish Delight.  Edmund is happy and answers her questions.  The Queen doesn’t seem so bad.  The Turkish Delight is enchanted and he continues to eat and reveals intimate details about Lucy and his family.  She wants to meet them and sends him back to the lamppost.  Lucy is there and he learns that the Queen was the White Witch.  Edmund refuses to accept it and they return home.

Susan and Peter do not believe the newfound tales of Narnia.  They ask Professor Kirke for advice.  He believes Lucy’s story and rationalizes the Narnia timeline.  Peter and Susan leave confused and the days move on.  The Pevensie youngsters find themselves avoiding a party and hide in the room with the wardrobe.  They open the wardrobe and step inside.  Narnia materializes and they move into the forest.

Lucy leads her siblings to Tumnus’s home, but it is destroyed.  A note on the floor reveals that he has been imprisoned for treason.  Lucy understands that she was the reason he was charged and she proposes to save him.  Everyone except Edmund agrees.  They do not know where to being, but a robin leads them into the middle of the woods.  Peter and Edmund debate on whether the bird should be trusted.  It flies away before they can come to a conclusion.

They run into a beaver.  His name is Mr. Beaver.  C.S. Lewis is reported to have spent close to two years formulating the name for this character.  Mr. Beaver tells them he is a friend of Tumnus and was hired to take them to Aslan.  He produces a handkerchief that Lucy gave the faun as proof.  He claims there are spies infested throughout the land and takes them to his dam.  Mr. B feeds the kids and brings them up to speed.  The White Witch arrested Tumnus and turned him to stone.  Aslan is the true King of Narnia and the only one who can save him.  The kids discover that Aslan is a Lion (all parts of The Lion, the Witch and the Wardrobe title are revealed) .  This scares them, but they agree to meet him at the Stone Table.  Edmund goes missing.

Edmund arrives at the White Witch’s castle.  A wolf named Maugrim greets him.  He is the chief of the Secret Police.  Ed reveals his siblings plan to find Aslan and the White Witch is summoned.  She is not pleased and they prepare to leave.  Lucy, Peter, Susan and Mr. Beaver meet Father Christmas on their way to the Stone Table.  He says that the White Witch’s power is weakening and gives them all gifts.  The snow melts during Edmund and the Witch’s own trek to the table.  Aslan has shifted Narnia from Winter to Spring.

Mr. Beaver and the kids reach the Stone Table first.  They met Aslan and he tells them they will rule Narnia from a castle named Cair Paravel.  Peter will be the High King.  A large wolf chases Susan up a tree.  Peter kills it with his sword.  Aslan spots another wolf and sends animals after it.  The Lion knights Peter.

The wolf finds the White Witch and tells her that Maugrim is dead and Aslan is back.  She decides that if she kills Edmund than the prophecy (four humans must sit on the thrones at Cair Paravel) cannot come true.  The gang catch up and the Witch uses magic to hide.  They are able to save Edmund.  The following day the Witch sends a messenger to Aslan.  He agrees to meet her and she tells him that Edmund is a traitor and owes her his life.  They discuss something in private.  Aslan roars and she disappears.

Everyone goes to the Stone Table.  Aslan forfeits his life to save Edmund’s.  The White Witch’s minions shave his mane and humiliate him.  She proclaims that she will still kill Edmund before she murders Aslan with a stone knife.  Susan and Lucy cover their eyes.  They mourn their loss and wander around in grief.  They return and Aslan’s body is gone.  They hear a voice and Aslan is resurrected.  His sacrifice for a traitor tapped into ancient magic and brought him back to life.

The Lion leads the kids to the Witch’s castle. He forms an army by reviving all of the creatures in the courtyard that were turned to stone.  They overpower the enemy forces and Aslan kills the Witch.  The campaign was a success, but Edmund is fatally injured.  Lucy heals him with a potion that Father Christmas gave her.  Everyone celebrates.  Aslan makes their royalty official and disappears.

The Pevensie children grow old and rule over Narnia.  They form fair laws and an era of peace reigns.  Tumnus alludes that the White Stag is now in the kingdom.  If the stag is caught, a wish is granted.  The adults set out to find him and run into the lamppost.  They appear back in the wardrobe and the empty room.  Everyone returns to their real age and time has not progressed.  The children visit Kirke and tell him about their adventure.  The Professor tells them not to worry.  The Lion, the Witch and the Wardrobe was only the beginning and their adventures in Narnia will continue someday.

0 comments on “The Lion, the Witch and the Wardrobe”