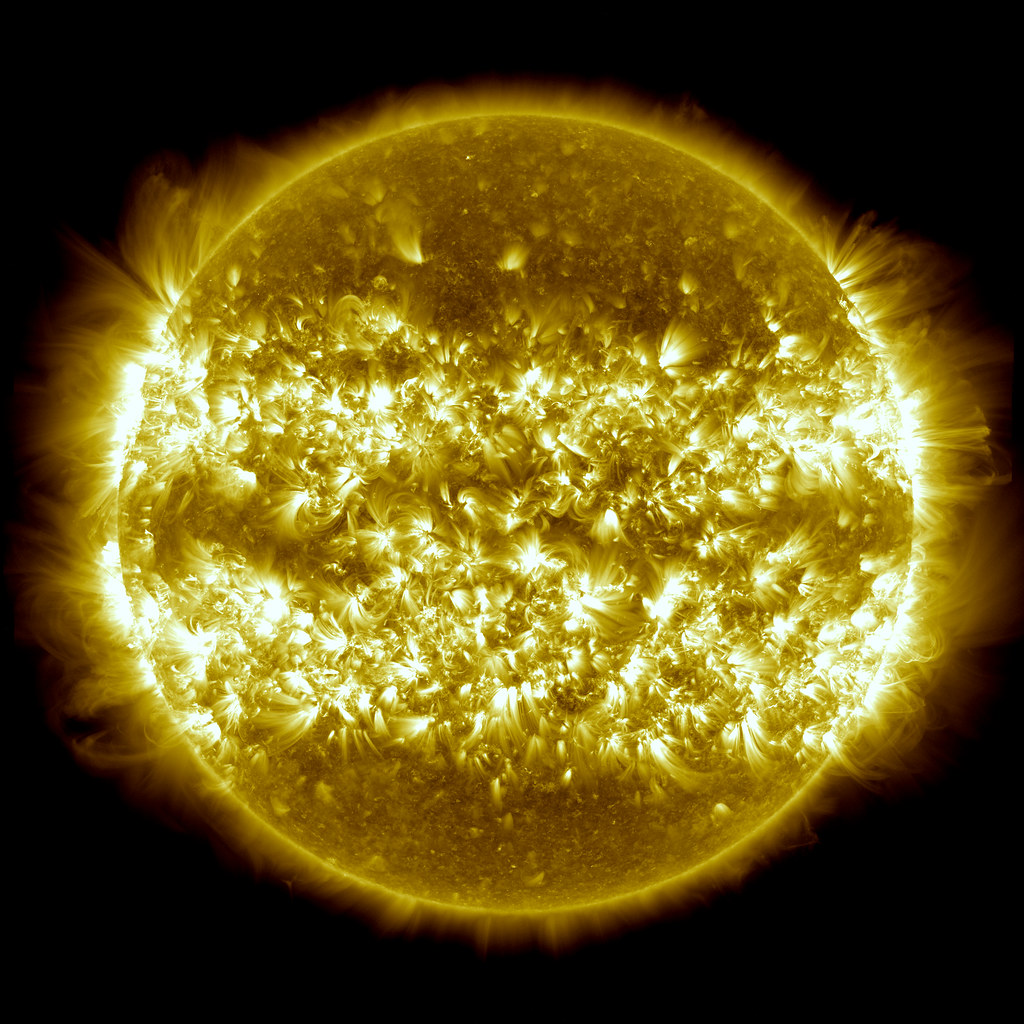 The Sun is the center of the Solar System.  It is the main source of energy for life on Earth.  The sphere of plasma is a G-type main-sequence star that formed around 4.6 billion years ago.  It is the brightest object in the sky.  The Sun’s favorite day of the week is Sunday.

The Greek name for the Sun is Helios.  The Latin word is Sol.  Sol is used in science fiction writing too.  Proto-Germanic language used the word sunnōn.  It spawned several others including, sunne (Old English), Sunna (Bavarian), zon (Dutch), sinne (West Frisian), sunna (Old Norse) and Sünn (Low German).  The adjective of the standard English variant relates to sunlight and means sunny.

Electromagnetic radiation from the Sun creates sunlight in the form of ultraviolet infrared and visible light.  The Earth’s atmosphere filters it and produces sunshine when there are no clouds.  It takes around eight minutes for sunlight to reach Earth from the Sun’s surface.  Direct exposure has both negative and positive health effects.  It can cause cancer, but also provides Vitamin D.  Chemical energy is created in plants through photosynthesis and sunlight plays a key role.

The amount of power the Sun deposits per unit area is the solar constant.  It is equal to around one thousand three hundred seventy watts per square meter.  The Earth’s atmosphere diffuses the power to an even one thousand watts per square meter by the time it smacks the surface.  The composition of light is around fifty percent infrared, ten percent ultraviolet and forty percent visible light.  Solar ultraviolet radiation creates the Earth’s ionosphere when it ionizes.  The Sun’s light is the color white on the visible spectrum.  This occurs in space and when it is high in the sky.  The color shifts to magenta, orange, red and yellow when the Sun lowers.

Hydrogen is close to seventy five percent of the Sun’s composition.  Helium accounts for twenty four percent.  The rest is made up of trace elements that include neon, iron, carbon and oxygen.  The helium and hydrogen were produced during the beginning of the Big Bang nucleosynthesis (BBN) and the formation of the universe.  There are meteorites in the photosphere that have not fully melted.

The structure of the Sun contains several layers.  They descend from the atmosphere and are followed by the photosphere, convective zone, tachocline, radiative zone and the core.  The atmosphere is made of a gas-based halo that surrounds the star.  The heliosphere, corona, transition region and chromosphere are its four individual sections.  Parts of the atmosphere are visible and can be observed during a total solar eclipse.

The gaseous star does not have a defined surface.  However, the photosphere is the deepest region of the Sun where visible light is perceived.  Photons escape from the photosphere past the atmosphere and become sunlight and solar radiation.  Early astronomers that studied the layer’s optical spectrum did not have a definition for the chemical element that later became helium.  Norman Lockyer (1836-1920) was credited with the discovery in 1868.

Seventy percent of the Sun’s radius extended to the Sun’s visible surface is the convective zone.  Temperatures are around nine thousand eight hundred degrees Fahrenheit.  The plasma is not hot or dense enough to transfer energy through radiation or heat energy.  The material in the lower tachocline heats and expands.  It rises through weight loss and reaches the convection zone.  The lighter plasma moves energy through convection instead.

The barrier between the convective and radiative zone is the tachocline.  Shear stress is caused between the two zones opposing rotations.  The stress is as symptom of the horizontal layers that slip past one another.  The magnetic field of the Sun is thought to be generated from a magnetic dynamo in the tachocline.

Thermal radiation transfers energy in the Sun’s radiative zone.  Helium and hydrogen ions emit photons that are reabsorbed by other ions.  This happens because the original ions are unable to travel before reabsorption.  Temperatures in the layer range from two to seven million kelvins.

The magnetic field around the Sun has a polar field between one to two gauss (unit of measurement of magnetic induction).  There are sunspots throughout the photosphere that are caused from concentrations within the field and heat is limited from the solar interior.  The field reaches beyond the Sun.  Solar wind pushes plasma deep into space.  Coronal-mass ejections and solar flares do too.  Historical instabilities in the magnetic field are hypothesized to have caused disturbances on Earth, such as the ice ages.

The Sun is located near the inner rim of the Orion Arm in the Milky Way.  This lies in the Local Interstellar Cloud or the Gould Belt around eight kiloparsecs from the Galactic Center.  The Solar System and the Sun are found in the galactic habitable zone (a place where life can develop).  The Solar apex is the direction where the Sun travels towards nearby stars.  The movement is pointed at a star named Vega.

There are three hundred and fifteen charted stars in two hundred twenty-seven systems within thirty light-years of the Sun.  Scientists believe that there are over one hundred and thirty more undiscovered systems.  The closest star is the red dwarf Proxima Centauri.  It is around four light-years away.