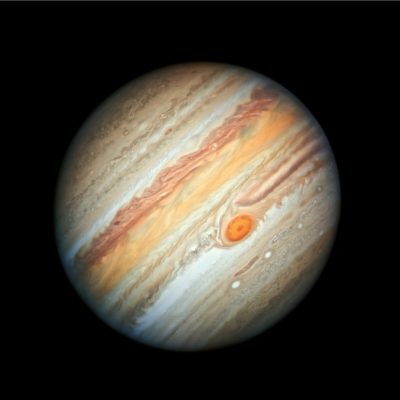 Jupiter is the fifth furthest planet from the Sun in the Solar System.  It is in between Mars and Saturn and known as the Giant Planet and the Gas Giant.  It is never stylized as “GP”, but that would slim down the total character length.  The nicknames are adequate.  GP is the biggest planet and comprised of gasses.  Jupiter’s actual name is derived from the Roman god…Jupiter.  He is the god of thunder and the sky and the king of gods in Roman mythology.  The Greek equivalent is Zeus.  Vedic (Hindu) astrologists called it Brihaspati and Guru, which means “Heavy One”.  The variety of pseudonyms can weigh on anyone.

All of the planets combined have less mass than Jupiter.  The Jovian mass is two and a half times greater than the others.  Its density is not proportional to the volume.  Over one thousand three hundred Earths can fit in Jupiter, but the mass is about three hundred times the size of the Blue Planet.  Scientific models predict that a proportionate mass would lead to overwhelming pressure and decrease its volume.  This could theoretically cause stellar ignition and Jupiter would collapse and become a star.

The Jovian core mixes with its mantle.  A planetary collision was likely the cause.  It is made up of metallic hydrogen that fills about one-half percent of the planet’s radius.  A hydrogen filled atmosphere lies above the core.  The temperature and pressure exceed the critical temperature (32.9 Kelvin – K) and pressure (1.3 Megapascal Pressure Unit – MPa) points of hydrogen.  The result is a boundaryless supercritical fluid state (SCF) where gas pushes down into the deeper liquid filled layers.  The further it goes, the hotter it gets and neon and helium droplets rain down into the lowest levels.  Some hypothesize that a diamond downpour can occur here.  That would be a profitable confirmation if it is ever proven.

The upper atmosphere is ten percent helium and ninety percent hydrogen.  The helium atoms have four times the amount of mass as the hydrogen ones.  The difference redistributes the ratio to seventy-five perfect hydrogen and twenty-four percent helium of mass compared to volume.  Trace amounts of other elements make up the rest (ammonia, water vapor, methane, neon, oxygen, sulfur, phosphine, ethane and carbon).  The neighboring planet Saturn has a similar composition.

Jupiter is covered in ammonia crystal and ammonium hydrosulfide-based clouds.  They swirl around in the planet’s tropopause (below the stratosphere and mesosphere) in bands that sit at various latitudes.  They vary in color and width and their intensity alternates each year.  The wind patterns are different in each band and wind speed can reach up to two hundred and twenty miles per hour.  The clouds have a thin upper region and a thick lower one.  Lightening has been observed and it is thousands of times more powerful than similar interactions on Earth.  The visible brown and orange coloring is from overexposure to the Sun’s ultraviolet light.

The Great Red Spot is the planet’s most recognizable feature.  It is located right under the equator and bigger than Earth.  The red hues fade to pink and white on certain occasions.  The cause of the red coloring is unknown.  Ultraviolet light from the sun is one theory.  High pressure produces an anticyclonic storm that is the largest in the Solar System.  The winds of the storm rotate in an opposite direction than the lower pressured ones above it.

Jupiter is one of the brightest natural objects in the nighttime sky.  The Moon and Venus are more luminous.  Mars is sometimes brighter if big “J” is orbiting far away from Earth.  The orbit reveals a fully illuminated planet through telescopic observation.  Crescent views have only been obtained through satellites.  The first sightings date back to the seventh century BC.  Ancient Chinese and Babylonian astronomers documented the first examples.  Galileo Galilei exposed the four biggest moons.  He published his findings in 1614.

There are almost eighty known moons spiraling around Jupiter.  Sixty of them have a width under 6.3 miles.  The big four are referred to as Galilean moons (named after double G’s discovery).  Their names are Ganymede, Europa, Callisto and Io and they rank among the grandest in the Solar System.  Ganymede is bigger than Mercury, but has half the mass.  He is a big boy and carries his weight well.

The Jovian moons are parsed into several groups.  The Regular moons are broken into the Inner group and the Galilean moons.  There are four tiny moons in the inner.  They all have widths under one hundred and twenty-five miles.  The Galilean moons orbit between two million and four hundred thousand kilometers from Jupiter.  The Irregular moons have four groups.  The Pasiphae group contains the outermost satellites.  The Himalia group moons are all clustered together and about twelve million kilometers away.  The last two are called the Ananke group and the Carme group.

Jupiter is not married, but has its own ring system. They are less prominent than Saturn’s and made of dust.  There are four of them.  The Main ring is the brightest.  The Halo ring is the closet to planet and the thickest.  The Amalthea gossamer ring is slight in appearance and clearest along the edges.  The last one is fainter than Amalthea and called the Thebe gossamer ring.

The Jovian magnetic field is fourteen times the strength of Earth’s.  It also has a gigantic gravity well.  Early theories assumed that it acts as a shield to the planets in the inner system.  It does this by drawing in comets and asteroids into the well.  Recent simulations suggest otherwise, but no conclusion has been reached.  The undeniable truth is that Jupiter absorbs two hundred times the impacts as Earth.  GP is an impactful planet…indeed.