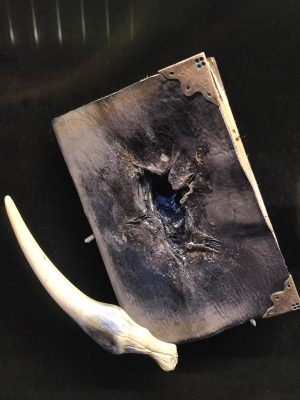 Horcruxes were created from the mind of J.K. Rowling for her Harry Potter series.  They are layered throughout the novels and a crucial plot device.  Sometimes they are out in the open and other times, intricately weaved underneath the storyline.  A Horcrux is an object that evil witches and wizards store a piece of their soul in.  This renders them immortal if the object is untampered with.  If their mortal body dies, the soul fragment in the Horcrux exists in limbo and can be resurrected by another wizard.  This process is the most sinister subset of all magic.

Creating Horcruxes comes with a pernicious cost and the ordeal is a direct violation of nature.  The price consists of a supreme act of evil or murder.  Afterwards, the soul is torn apart and a spell is cast to tie the ripped portion into an object.  The Horcrux can live in an organic or inanimate item.  A living one is riskier due to its free will.  There are no limits to the number of times you can split your soul, but after each event you lose more humanity.  The stability of the soul wanes too and the emotional regret can be fatal.  The theoretical procedure of making multiple Horcruxes was never attempted until Voldemort made six.  He believed in the magical power of the number seven (six objects and his own body).

The concept was so nefarious that most of the wizarding world was not aware of the existence of Horcruxes.  Hogwarts banned the subject altogether and Dumbledore was the main gatekeeper.  There are rare mentions of the topic in books that cover the Dark Arts.  Magick Moste Evile (Godelot) refers to it as an evil art that should not be spoken of and nothing more.  Secrets of the Darkest Art (Owle Bullock) goes further and dips into the method and consequences of their creation.  The subversive dark magic was so obscure and hidden that it was implemented only once before Voldemort.  The caster was an Ancient Greek wizard named Herpo the Foul.  He was also responsible for hatching the first recorded basilisk.  Ironically, Horcruxes are vulnerable to basilisk venom.

The key to destroying a Horcrux is to damage it beyond magical repair.  Burning or smashing it will not suffice.  However, if the attempt is successful, the destruction will extinguish the attached soul.  There a few ways to annihilate Horcruxes.  One is through the aforementioned injection of basilisk venom.  The potency was first discovered by Harry and the gang in Harry Potter and the Chamber of Secrets.  Potter’s arm was stabbed and he experienced the danger firsthand.  Fiendfyre is another.  The flame burns hotter than any other and will not extinguish until it runs short on fuel.  It is impossible to control and usually kills the summoner.  This is witnessed in Harry Potter and the Deathly Hallows.  The Sword of Gryffindor is the final method and made by goblins.  It cannot be damaged and can absorb power.  It gained the properties of basilisk venom when it was used to kill one in the Chamber of Secrets.  The venom that courses through the blade is relevant enough to get the job done.

Tom Riddle’s Diary was the first Horcrux Voldemort created.  He killed his classmate Myrtle Warren and moved his soul into his personal journal.  It was entrusted to Lucius Malfoy without him knowing its true power.  Malfoy slipped the diary to Ginny Weasley in Harry Potter and the Chamber of Secrets.  The power consumed her and Hogwarts with chaos.  Harry Potter saved the school by driving a basilisk fang into the diary.  The Horcrux was destroyed.

Marvolo Gaunt’s Ring was the second Horcrux and made with a ring owned by the Dark Lord’s grandfather.  He generated it by murdering his paternal family (Tom Riddle Sr., Thomas Riddle and Marry Riddle) when he was fifteen.  It was introduced in Harry Potter and the Half-Blood Prince and destroyed by Dumbledore with Godric Gryffindor’s sword.  The ring’s stone was also the fabled Resurrection Stone.  Dumbledore tried to use it and paid the price with his life.  He hatched a plan to die at Snape’s hands in order to deceive Voldemort, but his carelessness was his downfall.

Salazar Slytherin’s Locket was the fourth created and the third destroyed.  It was stored in a seaside cave that was protected by a door that required a blood offering to open.  The soul was set in it when Voldemort murdered a muggle.  Harry and Dumbledore found the original resting place, but the locket was gone.  It was located in the final book in Dolores Umbridge’s possession.  Harry and his friends were able to steal it and Ron demolished it with the sword.

Helga Hufflepuff’s Cup was the next Horcrux eliminated.  It was the third made through the poisoning of Hepzibah Smith.  It was hidden in the Lestrange family vault at Gringotts Wizarding Bank.  The vault was protected with various curses, but the kids overcame them.  Hermione and Ron ruined it with a basilisk fang.

Rowena Ravenclaw’s Diadem (crown) was converted into a Horcrux with the murder of an Albanian peasant.  Voldemort split the fifth piece of his soul into it and it was the fifth destroyed.  He swindled the Ravenclaw house ghost Helena to locate the lost object.  Helena Ravenclaw stole the diadem from her mother when she was still alive.  Vincent Crabbe inadvertently vanquished the Horcrux and himself when he attempted to kill Harry in the Diadem’s hiding place (Room of Requirement).

Nagini was number six and a snake.  Sneaky “N” was introduced in Harry Potter and the Goblet of Fire.  The death of Bertha Jorkins completed Voldemort’s masterpiece.  The Dark Lord settled on the snake when he was hiding out in the forests of Albania.  He kept the snake near him at all times and Neville Longbottom was its undoing, when he beheaded it with the sword.

Harry Potter was the unintended seventh.  The event transpired when a splinter of Voldemort’s soul leaked into Harry after he attempted to kill him in the opening chapter of Harry Potter and the Sorcerer’s Stone.  This left young Harold with a lightning bolt scar, the ability to talk to snakes and a unique telepathic connection with Voldemort.  The Horcrux was destroyed when Lord Voldemort used the killing curse to murder Potter during the climax of the story.  Harry returns from the afterlife and kills Voldemort and thus his remaining Horcrux.  The world transitioned into bliss with all of the Horcruxes destroyed.