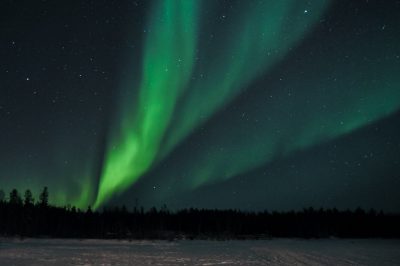 Polar Lights are a brilliant and natural light spectacle.  The technical name is aurora.  The northern variant is known as Northern Lights or aurora borealis.  The aurora in the south pole is Aurora Australis or Southern Lights.  The Roman goddess of dawn is Aurora.  Her name is also Latin for dawn.  Eos is her Greek counterpart and her siblings are Sol (Sun) and Luna (Moon).  Polar bears have nothing to do with mythology, but Polar Lights provide essential illumination for their cubs.  They may be future apex predators, but the unknown nightfall is still scary.

Dr. Stuart Clark categorizes Polar Lights observation into four forms.  Coronas (coronary) resemble a crown that deviate from a specific point.  Glows are barely visible and hang near the horizon.  Stars can be seen through the glow.  Curvature pathing through the sky are identified as Arcs.  Cloud shapes are called patches (surfaces).  Sometimes the forms fragment and mix together causing discrete auroras.  They are the brightest iteration and make the best nightlight.  Through the course of the night, the Polar Lights start as a glow and progress towards coronas before they fade and dissipate through other forms.

What is nm?  Visible light is seen through wavelengths ranging from 380-740 billionths of a meter known as a nanometer.  Here is list of the color wavelength nm.

Polar Lights occur in auroral zones that are ten to twenty degrees from the poles.  They are three to six degrees wide.  These bands are visible at night against the cold dark sky.  Galileo chose the name aurora borealis for the northern occurrence.  The Southern Lights are visible at high altitudes in Australia, Argentina, Antarctica, Chile and New Zealand.

On September 3, 1874 Fredrik Carl Mülertz Størmer was born in Norway.  1874 was a good year.  He pursued a career in astrophysics and mathematics and contributed to the calculation of π and other number theories.  Carl and his team discovered the optimal altitude to observe the light by triangulating thousands of auroras.  The result was between 90 – 150 km and as high as a thousand km.  Modern technology has increased the clarity and simplicity of capturing the event.  David Frederick Malin’s (3/28/1941) multiple exposure and multiple filter method for astronomical photography has pushed the precision to new heights.  Laboratory image work and predicative techniques are responsible.  Who would have thought that two Freds were the driving force behind the lights?

The history of observation starts with Pytheas of Massalia.  He documented the lights sometime in the fourth centry BC.  Pytheas was not a python.  He was an explorer and geographer from Greece.  Python is slang for the nonvenomous snake, Pythonidae.  A python is an ambush predator that constricts its prey and utilizes its backward and curved teeth to initiate contact.  The upper teeth have four rows and the bottom, two.  Pytheas only had one row of teeth and consumed his food in the same boring tradition as the Freds.  Lucius Annaeus Seneca (Seneca the Younger) described the auroras in Naturales Quaestiones.  He was a Roman Philosopher and also nonvenomous.  He lived from 4 BC – AD 65.  Boy does time fly when you are observing Polar Lights.  Speaking of flight, Japanese folklore from early 620 AD details pheasants as heavenly messengers.  Pheasants (Phasianinae) have red tails.  Japan’s Graduate University for Advanced Studies and National Institute of Polar Research have recently correlated this to a red aurora.  Closer examination of the word flight reveals that if you subtract the letter “F” you are left with the word light.  This could be significant to the Freds.  If you want to host this experiment in your homestead, you need a piece of paper and a writing utensil.  The ideal choice would be a No. 2 Pencil.  This makes a fantastic scraping noise when it is applied to the paper.  Write out the letters F…L…I…G…H…T.  Once completed,  place your index finger or any other object similar in width and height (perhaps a tube of lip balm) over the “F”.  Take a moment to calm yourself.  Take a few breaths.  Inhale and count to five.  Exhale and count again.  Now read the word.  If you followed the steps, you have confirmed your hypothesis.  It says light.  Thank the Freds.  They made this possible.

The Aboriginal Australians have traditions with fire that could be related to the Southern Lights.  Norse mythology has references of the Northern ones beginning in AD 1230.  The man on the hundred-dollar bill composed a paper Suppositions and Conjectures on the Aurora Borealis in 1778.  Benjamin Franklin’s theory involved electrical charges coupled with the moisture in the air and elevated by snow fall. He experimented with a kite and electricity. That discussion is for another day, but boy could he pose for a photograph.

Solar wind linked with the Earth’s magnetosphere are the basic causes for the appearance of Polar Lights.  A disturbance from the wind changes the trajectories of charged particles in the atmosphere.  The result is an ionization that emits light and forms the aurora.  Gaseous particle collisions can be embarrassing when they are dispersed from a human, but beautiful when they are from mother earth.